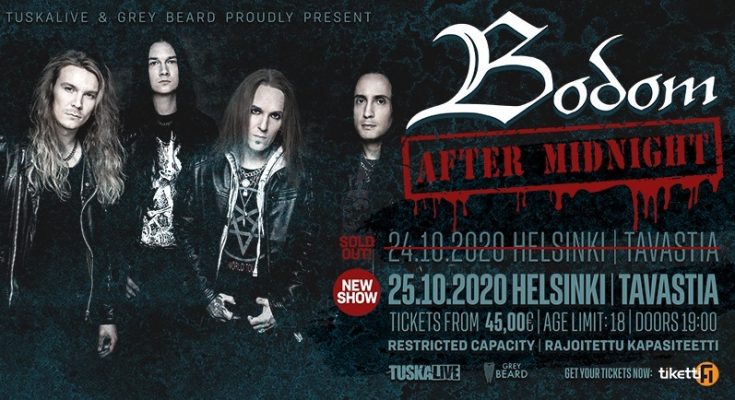 We’ve been lucky here in Finland lately with live shows considering the situation. A week earlier we managed to attend to one of the great 30th anniversary shows of Amorphis at Tavastia. And since we were quite pleased on how the venue handled their business on hosting shows as safe as possible, we decided we couldn’t miss out on yet another rather exclusive and special show. After Children of Bodom disbanded almost a year ago, Alexi Laiho and Daniel Freyberg wanted to continue their partnership and after finding some talented individuals to complete the line-up, they announced Bodom After Midnight to be the new entity under which they’d perform both CoB classics and new music. Last weekend they played their first 3 shows as a band and we were lucky enough to be able to attend to the last one of the short run.

It has to be said that compared to the earlier show we attended, it felt a tad bit less organized. It looked like there were a bunch of people who squeezed in the area next to the designated standing rows instead of looking for a spot to sit. For instance on the balcony area upstairs, there were still a whole bunch of tables and seats empty where most likely those people standing where they weren’t supposed to, could’ve sat down. I hope that at future shows people are a bit more attentive to the rules of the venue to not screw over our chances to still have shows. Or that the venue’s crew/security approaches those who are breaking the rules and gets them sorted out.

Anyway, back to the show. Which is most likely why you are reading this. On stage they had a simple setup with a black backdrop featuring the kind of fun band logo featuring “Bodom” in the classic CoB font and the “After Midnight” stamp under it. During the typical ominous intro sounds that sounded all too familiar from past CoB shows, drummer Waltteri Väyrynen and live keyboardist Vili Itäpelto greeted the crowd and took up post behind their instruments. And once Alexi and Daniel ran on stage with bassist Mitja Toivonen, Bodom After Midnight (***1/2) was complete and off they went. They kicked it off with a track from every release that is considered to be part of the CoB “holy trifecta”: ‘Hate Crew Deathroll’, ‘Hatebreeder’ and ‘Follow the Reaper’. First off there’s the CoB classic ‘Needled 24/7’, followed by ‘Silent Night, Bodom Night’ and rounded up by what you could consider as the new band’s theme song and inspiration for the band name: ‘Bodom After Midnight’.

When comparing Bodom After Midnight to its predecessor, there are of course a couple of clear differences noticeable. I am pleased to say that at least live it’s definitely not a trade-down. Mitja is a very accomplished bassist that always seem to be bursting with energy on stage and on his own brings the excitement to a higher level again. It was cool to actually see the drummer’s face this time around with Waltteri‘s smaller set, on which he perfectly matches everything beat for beat. And while Vili can’t really live up to Janne‘s antics on stage and feels more static behind the more regular keyboard setup, he’s clearly starting to grow into being a part of Bodom After Midnight‘s live line-up. Being surrounded by these young guys, really seemed to have lit a bit of a fire under Alexi and Daniel‘s asses, because even they felt more hungry and energetic than about a year ago.

The show mostly evolved around a setlist build from tracks from the 3 albums that were released during Children Of Bodom‘s peak period, or the “holy trifecta” as I called them earlier. Added to that a couple of classics from ‘Are You Dead Yet?’, a couple of oldies with ‘Deadnight Warrior’ and ‘Knuckleduster’ and only one track from the last release ‘Hexed’. All the rest of the Children Of Bodom catalogue seemed to have been mostly ignored, resulting in a heavy and rather old school set. Nothing too crazy surprising and a bit of a pity to not hear anything new yet, but all in all a quite impressive collection of tracks. It was good to see these guys live for the first time and what I saw holds quite the promise for Bodom After Midnight‘s future!