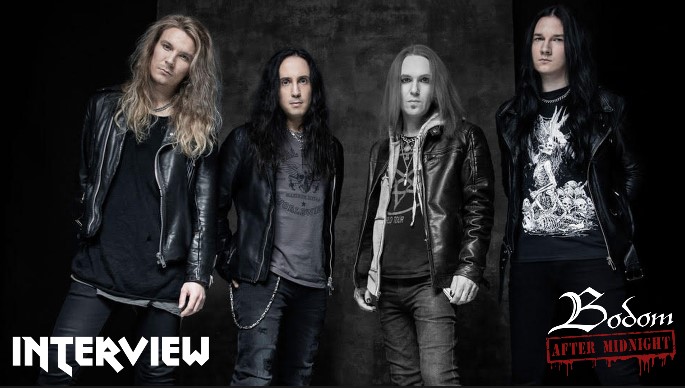 Everyone was pretty excited when Alexi Laiho and Daniel Freyberg announced to continue the Children of Bodom legacy through the new outfit Bodom After Midnight. After only a couple of shows last Autumn due to the COVID-19 issues (report here, photo coverage here), they were working towards getting their first music released through an EP and getting ready to conquer the world. Sadly, there came an end to those plans with the unforeseen passing of Alexi. The EP ‘Paint the Sky with Blood’ was still to be released (review here) and will now be the last work from this metal legend to be unleashed upon the world. We sat down with Daniel, Mitja and Waltteri shortly before the release last month and had a chat about how things are, were and will be.

Daniel, Mitja and Waltteri were in good spirits despite the situation and were looking forward to finally release the first (and last) songs of Bodom After Midnight into the world. We had a chat about writing and recording the new music with Alexi and how excited they all were about this. Especially Alexi told them that he found back that anger from back in the day of the first Children of Bodom release and felt like he was 20 years younger. They also discussed how Waltteri was the one who suggested to cover a Dissection track for the EP and how much fun they had covering a more serious extreme metal track. The 3 first (and only) shows they had back in October are now something that has a whole different meaning and they wouldn’t be against a possible tribute show to celebrate Alexi‘s legacy once everything gets settled down more. Now the guys are slowly setting their sights on other musical endeavors where Waltteri of course is going to continue playing with Paradise Lost, Daniel has something cooking that he’ll announce later and Mitja will see whatever comes his way whenever it feels right.

For the full interview go watch the video on our Youtube channel or right here: