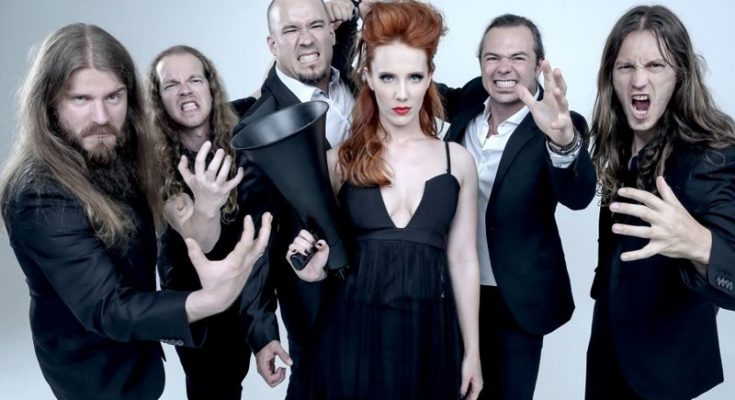 Isaac, Epica.
Epica, Isaac.
All such friendly band members and full of jokes.
We had the chance to talk to Isaac Delahaye, guitarist of the Dutch band Epica. We were received with a smile and some smalltalk. Thank you for the opportunity! 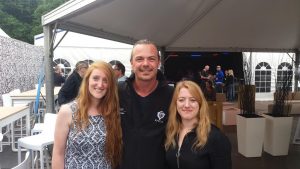 Speaking of the program ‘Jani gaat.. op metalcruise‘, you noticed the popularity of the band increasing? The program contained a lot of fragments with you guys.
(laughs) If people hear the name Epica, it rings a bell. It’s not like we are selling millions of records all of the sudden. It stays a bit of underground metal – it’s not mainstream – but we received many positive reactions with that episode. We just saw a little video of Jani wishing us good luck, he’s still thinking about it. We met up a few times, that was fun.

Why the choice of playing the genre Symphonic Metal?
When the band started, I was not a member. I joined 10 years ago. Mark comes from After Forever, who had a comparable concept. He started his own band to do sort of the same thing: metal with orchestra, classic music, grunting and all things together. Nightwish, Within Temptation etc were coming up. That’s why I think we play what we play now, The Gathering was already there and was kind of an example with a female singer. It’s nice to have a woman around, men are super tough right… (laughs)

Speaking of female singers. Most bands have grunting men on stage, you have a woman. You notice some feedback from people or other bands you have different sex singer?
How bigger the band gets, the less feedback we get. If I look to myself, coming from the death metal scene, I thought “This can not be good, that’s not aggressive”. I grew up with bands like Pantera: full speed. With the first album, I covered for the original guitarist and had to listen to the album. When I did, I thought “this is spicy music” and changed my opinion. Earlier, you saw the metal couples standing in the back and a female friend enjoying the show. The men with Burzum, Morbid Angel t-shirts stood at the bar. Now we see them joining the mosh pits. Our music gets heavier.

When listening to your music, we noticed the lyrics. Most of the time it’s about philosophy, politics and quantum physics.
(laughs) It’s not about the birds and the bees. Simone and Mark are the writers of the music, they do 50/50 of the work. Simone writes more about personal things like the loss of someone near, the birth of her child, a nightmare… Could be anything. Mark writes more about science, political issues etc. Of course I can relate to the lyrics, it’s not like it’s a bunch of crap. The first album was about child abuse in churches. Quantum physics is a tough subject, a new branch in the world of science – that’s so weird and interesting. If you go deeper into the subject.. We know the place as it is and perceive it: this is a chair, this is a phone recording our conversation and everything is like we see it. In quantum physics, it’s about the fact that everything isn’t material. In time and space, it can ‘be’. If you think about it, you have to admit it because it’s not coming out of nowhere. It’s a real experiment, there are theories about it that seem to be right. Previous album The Quantum Enigma is about that theme (the riddle of quantum physics). The Holographic Principle lays in same line – the science of now thinks that  the world is a hologram. It’s more difficult and complex than this but if you think about it, the world as we know it now could be kind of a fictive world. Like the Matrix (laughs).

Your bandname Epica – which is the name of a Kamelot album – do they know this and how was their reaction?
In the meanwhile, they know for sure (laughs).
Formely, Epica and Kamelot were recording in the same studio. Everyone of Epica was fan of the name “Epica” when Kamelot was recording their first album. They found it better then “Sahara dust” so they took that as name. The meaning of it is fictive but Kamelot gave it the meaning “a gate in the universe where all answers lay for all your questions”. It’s a sort of utopic goal: if you go there, you will find all the answers. We played a lot with Kamelot and Simone is married with the keyboardist. We know each other. I think Kamelot was honored at the beginning of our career.

Before going up on stage, do you have a little moment or some sort of cheer-up line/action?
Before we play, we say to each other with a very Dutch accent “good show”. It comes from our previous tour manager who worked with us for a long time. He had an accent and always gave us a fist bump with the line “good show”. After all those years it became a little moment before the show. Even with the crew and backstage members! Only when everyone has done that, we get a “go” from the tour manager. It has to happen first.

You organise your own festival, even in Brazil. From where did you get the idea?
The thought has been there for a while. With the 10 year show Retrospect, we sold it out by our own without a support act. We had a live stream, sold thousands of tickets with that. So we thought “we can do that in Netherlands”. The concept we had with an empty hall and bringing everything inside – it already was like the organisation of a festival but without other bands. Logistic-wise it was interesting to do. We’ve done so many things like getting an orchestra from Hungary. We played in cool venues and thought “we can go bigger” so why not now. We bounded the strengths with other bands and we started with our idea. It’s been done for 2 times now. For the 1st edition, we are looking for a date around the beginning of next year. It takes a lot of preparations, checking if the bands are on tour..
It’s different being in the organisation than being a band. It’s not that I will be in an office our refill the fridge of Sepultura (laughs).
Then we thought of Brazil, they don’t have the concept like we know around here. There it’s more playing alone as a band and most of the time people are supporting the local bands. It was very cool to gather more bands there at one day, but for logistics it’s tough because you’re on the other side of the world. We wanted to know if it would work on another location and it does. Maybe next time we will organise our festival in France, it does not have to be Brasil again. The name ‘Epic Metal Fest’, we have it now and we can do with it what we want.

For making a line-up, how do you choose the bands playing at your festival?
It depends on a lot of things. If bands are on tour, it’s easier to get them in the line-up but if it’s for a single gig, they have to come across the world. Every member of our band makes a list, we lay them next to each other to see if there’s an overlay. If we have a genre, it’s good to have a second band in the genre. If we ask one death metal band for example next to 10 other bands, a fan will not pay a ticket for just one band. That’s something to consider. But the list starts with the bands we want. It’s more like “Epica and friends”: bands we played with, we saw on other venues, we had a drink with..

Is there one band in particular you want to book for Epic Metal Fest?
Each year I try to ask Soilwork but it never worked because they had other things to do. I’m a big fan so that would be cool.