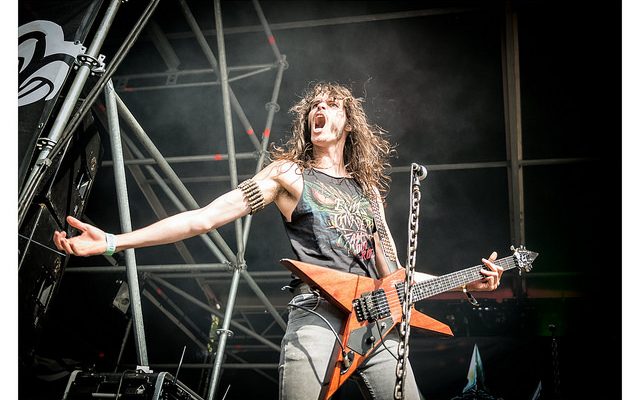 During the second day of Antwerp Metal Fest, the talented Belgian speed and thrash metal band Evil Invaders played on stage in their home country. They’re still touring to promote their first album ‘Pulses Of Pleasure’ and in September they’ll start touring for their new album ‘Feed Me Violence’. I interviewed guitarist Max and bassist Joeri. During their tour, they were invited for the first time to play in the United States in April. Unfortunately, they didn’t have the necessary work permits and were denied access to the country.

How was that experience?
Max: “It was interesting.”
Joeri: “It was like in the movies. We came there and we had to take off everything except for our pants and our T-shirts. We even had to take off our belt, so we wouldn’t hang ourselves. And our ear rings had to go as well because you can slice… I don’t know! The cell was a pretty small area with a toilet without a door. All the typical stuff you see in the movies. The blankets were like garbage bags, it was just paper. But it was an experience.”
Max: “It could have been worse! We got free food, a bed and a blanket! What do you want more?” (laughs)
Joeri: “It’s a shame we didn’t see more of the US except for that.”

Were the cops just as nice as you said on Facebook?
Joeri: “Yes, they were really nice, they just did their job. They had to do this, they couldn’t do anything else. I was just a bit… I don’t know how to describe it.  I didn’t know what was happening at the moment.”
Max: “But they said it too: we didn’t commit any crime, we didn’t do anything wrong. We were just violating the ESTA-law [redaction: travel authorization to enter the United States], that was the only thing that we did. We didn’t have a work permit, that’s all.”
Joeri: “It’s a vague law. A lot of bands don’t really know how to really have the right documents and stuff. It’s a common mistake with bands.”
Max: “It’s a game of luck. You get caught or not. We know a lot of big bands who travel without a work permit towards the US, and some really small bands who didn’t get through too.”

Better luck next time.
(Both laugh) 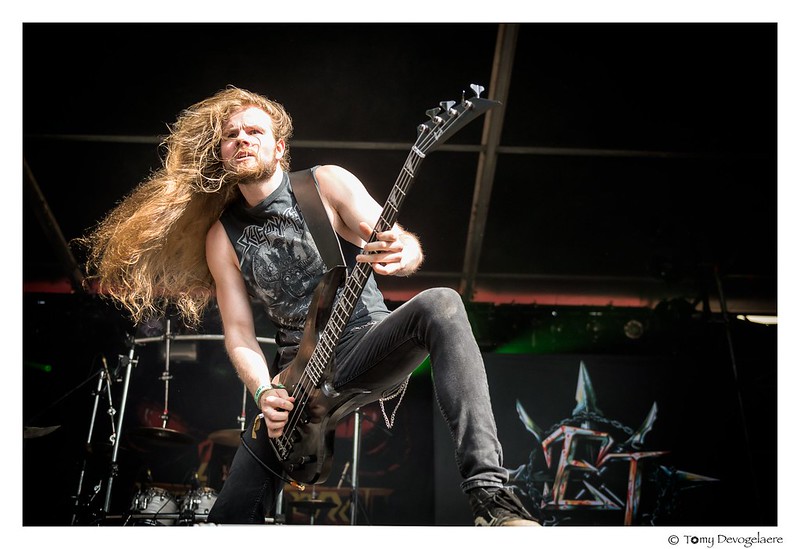 A couple of years ago, you entered the Wacken Battles. How fast did it go from then on for you guys?
Max: “We’re the newest members actually.” (laughs)
Joeri: “That’s true. We’ve joined two, three years ago. The Wacken Battles was I think in 2013? But the band didn’t play eventually because we got signed by Napalm Records. But the signing with Napalm was the beginning of the touring experience for Evil Invaders. They played on Graspop, we went on tour with Destruction, we went on tour with Skull Fist… We actually went touring non-stop.”
Max: “Exactly, it’s a way of promotion. We were constantly on the road showing people our music everywhere.”

How different is the life on the road from your regular life?
Max: “It’s way easier. You don’t have to give a shit about other stuff.” (laughs)
Joeri: “It’s nice. It’s actually the opposite of the regular life. I’m a part-time accountant so at home I’m sitting behind a desk. On tour I’m partying every day so it’s really different. But it’s amazing. It’s hard in its own way, it’s not for everyone. Lots of people say ‘Touring, it’s fucking awesome. It’s like a holiday all the time’ but that’s not true. We love to tour, but if you have a wife and children or if you really like to be at home all the time, then touring isn’t something for you.”
Max: “Also your body feels it after a couple of weeks… The same routine every day: loading out, loading in, venues have a lot of stairs which can fuck up your back. Young people like us usually party afterwards. You also feel that.” (laughs)
Joeri: “But we’re still young, so we really want to take it now. We get all these chances, so why not take them? When we’re 40 years old, it’s going be a bit more difficult to do it than now. So now we want to go all the way. That’s why we’re almost constantly on the road.”

You’re touring right now, you’re still going to have a lot of shows. But you’re also releasing a CD. Is it finished?
Joeri: “We finished the recordings two months ago. We started in January, then we had a lot of shit, like always! Now it’s time for promotion. We did a video clip and you can expect new video clips in the months to come. The album release is the day after the release itself. The 28th of September we perform in Aarschot, in JH De Klinker. Then we’re starting touring again, to promote the new album (laughs). Now we’re at the end of the cycle of the first album and in September the cycle of the new album starts.”
Max: “The official release will be September 29.”

You also played a couple of songs today from the new album, right?
Max: “The opener was As Life Slowly Fades, which was also featured on tour.”
Joeri: “And we played Mental Penitentiary  as well, the song from our video clip.”

What is influencing your new album?
Max: “Depression.”
Joeri: “Do you mean lyrically? Max is the main songwriter.”

Lyrically and musically.
Max: “Well, musically it’s a lot of different stuff. It goes from old school Blues-Rock to Death Metal, whatever. It kinda comes out and the song writing as well. The lyrics are quite dark. It’s like sometimes, life is shit for a while. But that sad part is a source of creativity, so I just take that fucking shit and put that into lyrics and into songs. That kinda made the record to what it is now. It’s pretty dark.”
Joeri: “We clearly see progression as the band tours. I think every release is better than the last one, and I think that’s what it’s supposed to be.”

You started touring with Sepultura. How is that experience?
Joeri: “It’s cool. We only did three shows until now and it’s always quite busy, so we didn’t have the chance yet to party with them or something. Hopefully that will change next week (laughs). But they’re a great band, they’re nice guys and stuff. It’s really fun.”

Do you have any tips for new bands?
Max: “Work as hard as possible.”
Joeri: “Don’t pass any chances, just take them.”
Max: “Play as much as you can. Practice, and show them your talent.”
Joeri: “Indeed, it doesn’t come from itself. You really have to work hard, not only on the music, also on the show! I personally think that’s what most modern bands lack today. Every guitar player is insane good nowadays and they can play music tight as fuck and it’s good music. But when you see them live you simply hear a CD. You see them standing and concentrating on playing it as tight and good as possible. But when I go to a show, I want to have an experience. I want to see the musicians enjoy what they’re doing and I want to see a show. I think that’s what most bands lack nowadays. The music is of course the most important part, but the show…”
Max: “It’s a part of rock ‘n’ roll.”
Joeri: “We look like an old school eighties band, but back then it was like that as well. Back then it was about the show and they showed it on stage, instead of playing as good as possible. It gave more of a live experience.”
Max: “If you do a backflip but you miss one note, fuck the one note.”
Joeri: “It gives a vibe. Or else you can just listen to a CD and stay home. If a band comes to me and asks for tips, that’s what I would say.”

Do you have any more tips?
Max: “The music business is hardcore. You’ve got to eat more shit than you get. Hard work always pays out.” 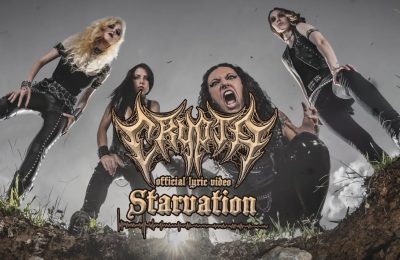