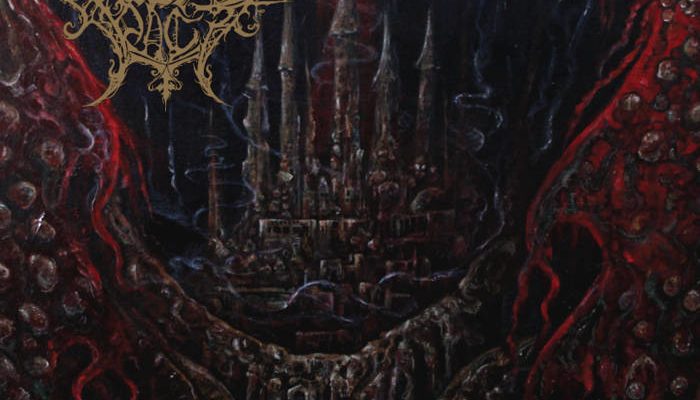 While the word “Gothic” is relevant to the medieval ages many artists and musical groups were fascinated by the ancient history, myths and the practice of magic and sorcery. Until this day the medieval era kept its secrets deep in the haunted vaults. However, it was in the ancient era when the best works of literature and poetry determined the essence of heritage.

From the same label that brought notorious acts such as Vargrav, Goatmoon, Satanic Warmaster, Mórketida, etc…. Werewolf Records now presents the debut album of the Finnish black metal outfit Faustian Pact. Having released three demos between the periods of 2008-2010, the Finnish outfit was established in 2007 and stayed silent for a very long time. Ten years after releasing their third demo the outfit breaks the silence by molding their music into medieval overtures. The debut album Outojen Tronien Varjoissa “In the Shadows of Strange Tower” displays a unique breadth of melodic enchantments. Crafted meticulously with ornamental synth, swirling riffs, and vocal screeches that beautifully contrast to the angelic female vocals.

The mystical intro of the opening track “Saastainen valo lintutornissa” wanders between the ethereal female chants and veers into a melodic bliss. The grim vocals of Octus provide a dark haunting aura while the guitar melodies are encapsulated by the soft elegant tremolos. The music becomes embedded into a nostalgic style of black metal, and the beautiful tunes of Nordic majesty. “Myytti Am’Khollenin kuninkaasta” suddenly bursts into the power of the swirling riffs while the epic symphonies create the dark Faustian themes of occultism.

The raucous thundering of the drums is professionally handled by Kathral who provides a burst of powerful pace. There are moments where you can hear the interplay between the soft piano and the moonlight symphonies that becomes the central theme. “Kuulas Musta Aika” can be described by the beautiful blend of folk element and the powerful guitar riffs which are handled by Morthum. The track also features dual vocals while the complex interplay adds many textures to the music. The melodies and hooks are brilliantly crafted after many years the trio finally seems to have cultivated their talents. Faustian Pact relishes the folklore themes and pompous melodies therefore the approach to melodic black metal feels well fitted.

The charming strings of the clean guitar on “Loitsupuut” show their ability to create diversity on each track and the interplay of the different musical arrangements is yet another way of their enchantment. The transition from mid-tempo to the fast pace and the use of the melodic undertones creates a mystical atmosphere. Suffice to say that Faustian Pact wields enormous black metal styles, for example, “Rauniopuhetta” ornate the subtle folk melodies and the rhythm guitar becomes the backbone, the combination of the medieval atmosphere and minimal use of symphonies has clear effects on the music.

While the main theme creates an archaic aura, the delicate symphonies are akin to dungeon synth. Probably the closest comparison to the band would be Summoning and Caladan Brood. “Outojen Tronien Varjoissa” is influenced by the ancient art of medieval black metal, among other tracks such as “Keihäsrinta” the band emphasis romanticism. The track begins with swift blast beats and melodic tremolos that will take you back to times of bygone to cold and frigid mountains of Scandinavia. Where the medieval castles surrounded by tall pine trees, through the varying musical themes the album cascades beautifully. “Valottomien askelten takana” is encapsulated with rhythm guitar and dual vocals.

The kind of melodies that are selected on the debut album are grandiose, the musical work here is splendidly performed. “Outojen Tronien Varjoissa” is dipped in ancient folklore aesthetics, therefore, the melodies are distinguishable from the other bands. “Askeesikuun luolissa” and “Viimeisen tyrannin silmä” are both dark and powerful, the blast beats and the tremolo pickings provide a thrilling climax. Album closer includes a variety of guitar riffs and tempo changes. Delivered by the epic qualities of the tremolo pickings and the blast beats.