After having heard a lot of stories about getting stuck in traffic jams from Paris on the way, we decided to take an alternative route via Calais and Rouen to Clisson. This turned out to be the right decision, less traffic jams, nice route and faster arrival.

Because it was our first time at Hellfest we listened to the tips we got from our predecessors and first we discovered the beautiful terrain, the merchandise stands and halls and the great range of food trucks and stands… We have ended up in food heaven!

This edition we had interviews with the following bands ‘The Great Old Ones’, ‘Heilung’ and ‘Ensiferum’. Read them on our website.

The first band that we’ve seen is Rose Tattoo. Fortunately, with their Aussie Rock ‘n’ Roll they managed to take over the entire meadow. Frontman Angry Anderson made a great party out of it, and the audience was relaxing in the sunshine.

Judas Priest. For an old man in his late 60s, Rob Halford can still scream like hell, though he doesn’t move around very much on the stage he still managed to shake his hips during a couple of songs. It was a good show, but we noticed that the energy they used to radiate and draw the audience into it, is a thing of the past.

One of the highlights on Saturday was Tremonti, she played on the Mainstage I. After showing his great guitar skills at both Creed and Alter Bridge, Mark Tremonti has had his own side project Tremonti for some years now. In this project he can show us what a great singer he is, besides his great guitar talent. The audience listened to it with great pleasure and so did we!

Next up Jonathan Davis, who after the great successes with Korn and his experiments in dubstep, found the time for a solo album. This ‘Black Labyrinth’ is a very strong solo debut. On stage we recognize another Korn member, namely drummer Ray Luzier. He is allowed to show his drumming skills and did an excellent job. It was a great gig!

The next band we were looking forward to see was Body Count with Ice-T or what he called himself “Ice Motherfucking T Bitch”. It was an hour of heavy metal hip-hop. Especially US president Donald Trump often had to pay the price in Ice-T’s insulting tirades. But there was also a tender heartwarming moment during this set when Ice-T called his two year old daughter on stage. To the great delight of the Franch metal fans because the little one was dressed up in a complete outfit of “les Blues”, the French football team. They managed to warm the hearts at the meadow, and it was already hot enough that day.

Limp Bizkit. One of the bigger names on the bill this year and we looked forward to their gig for many nostalgic reasons. Limp Bizkit was a part of our teens and twenties as much as Metallica, Sepultura or Iron Maiden and the few times we’ve seen them it was usually in a way more drunken state than now. Unfortunately this drunken state is what made a lot of the experience it seems, as this time they spent more time talking to the crowd than actually playing their songs. Fred Durst almost spent 10 minutes yelling at his light-technician, it was very annoying. When they played the classics though it was very fun and you could feel the vibe across the festival. Nookie, Faith, Break stuff, Take a Look Around, My Generation and the Cover medley with Killing in the Name and Faith really got the crowd going. All in all a shame they didn’t keep up the tempo or it could have easily been one of the absolute highlights of Hellfest 2018 for us. Maybe next time we should drink some more wine before seeing them.

A band we’ve been following for a long time now is Shinedown! What a great performance! Brent Smith has a powerful voice and knows how to use it. He plays the audience as if he was born for this. With their positive affirmations, pop sensibilities and hair-metal heaviness, the Tennessee group unites rock fans young and old on the meadow.

From the 90’s is on the Mainstage II ‘Alice in Chains’, we have been looking forward to this for very a long time to see them live. Unfortunately without Layne Staley passed away in 2002. They play their grunge rock set perfectly, very stern and so nostalgic. One of the highlights of the festival!

Iron Maiden! The last band for us at this edition of Hellfest and the perfect ending. When we looked around us in the middle of the meadow we got goosebumps. We have never seen so many people on the meadow and light hills of the terrain coming together for them. Bruce Dickinson’s voice still doesn’t fail and he runs from one side to the other like an Duracell battery. A good end to a fantastic experience at this great festival. Meanwhile we were told that Manowar will perform at the 2019 edition and we decided on the spot that we will return next year.

Our third GRIMM GENT reporter had more time to explore the meadow, because Pieter and I often had to wait a long time in the press room to do the interviews or try to get the liveblog going. A negative point on the festival site is the bad wifi connection. Sometimes it was very difficult to communicate with our colleagues on Graspop or upload messages on our social media.

To relive the atmosphere of this edition, you can give our liveblog a second view: https://www.grimmgent.com/grimm-hellfest-2018/. 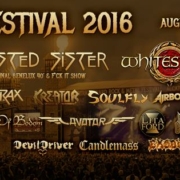 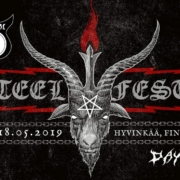 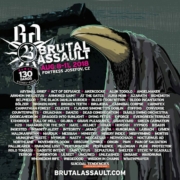 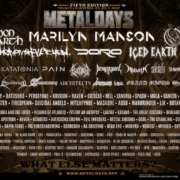 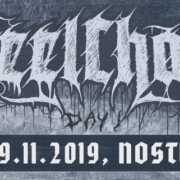 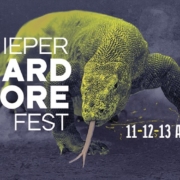