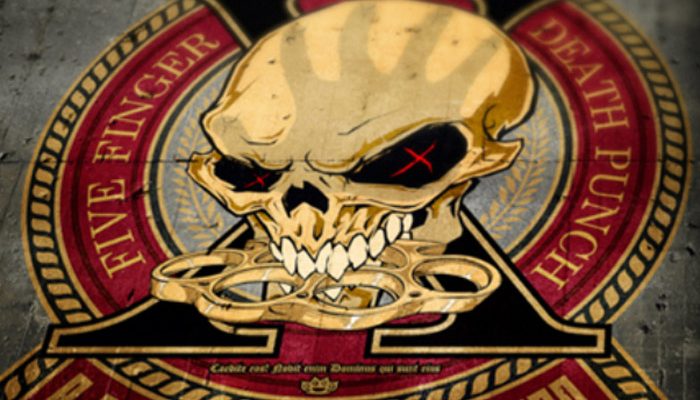 It’s been two years since Got Your Six, but Five Finger Death Punch is finally back with new material! Or, well… That depends on your point of view, as A Decade of Destruction is a compilation album, but also includes a completely new song and a cover of The Offspring’s Gone Away. With a mixture of both new and old material, A Decade of Destruction features songs from every previous Five Finger Death Punch album, from Way of the Fist to Got Your Six. For everyone who isn’t familiar with the band’s music yet, this release serves as a pretty decent introductory album to What Five Finger Death Punch is all about. A combination of ‘middle finger’ heavy metal and heartfelt, emotionally loaded lyrics.

Trouble starts off with the classic, heavy Five Finger metal setting. Ivan then pitches in with “I don’t look for trouble, trouble looks for me. That’s how it’s always been, that’s how it’s gonna be.” Looking back at the band’s… bumpy history, regarding issues within the band, alcohol and their record label, it certainly seems that wherever the band goes, trouble follows. With Trouble, Five Finger Death Punch makes the statement that ‘getting involved in trouble’ is just an unavoidable part of their career, but whatever happens, they won’t back down so easily.

As mentioned earlier; Gone Away is a cover song, but damn! It definitely took a different route than expected! Whereas usually, when metal bands cover a non-metal song, they end up with a heavier, faster sound. In this case, the result is quite different. Five Finger‘s version starts off with a very ‘Remember Everything’ feel to it. In comparison, The Offspring‘s punkrock sound definitely feels more energetic, but that’s also a good thing. Five Finger Death Punch shows that they don’t need to take things to a heavier level to make it their own. If you’re feeling a little moody (pun intended) and are in for some soothing FFDP music, this song should definitely be in your playlist!

Looking at the old material included in the compilation album, there’s a mix of both heavy and ‘easy going’ music. With song like Jekyll and Hyde and Far From Home, there’s sure to be something for everyone.

A Decade of Destruction is out now! Give it a listen!