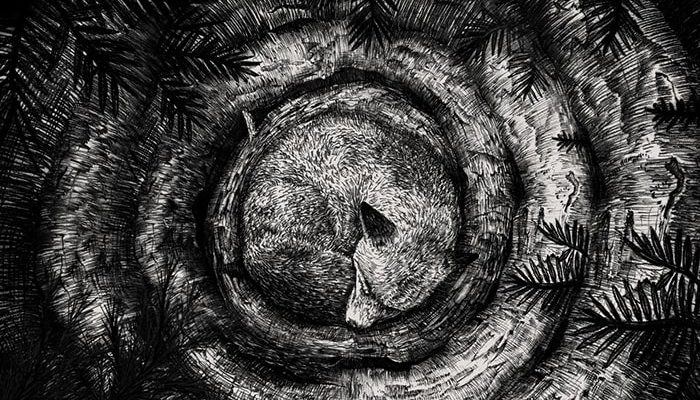 Forhist is a side project band of the French guitarist/vocalist Vindsval (Blut Aus Nord) who never ceases to impress his loyal fans. Named after the fourth track “Forhist” of Blut Aus Nord’s eleventh album “Memoria Vetusta III: Saturnian Poetry“, on the self-titled debut album, mastermind Vindsval offers a classical perspective. The songs are achieved by the classy performance of the lead guitars, beautifully presented in the spirit of Norwegian black metal. Forhist takes a retrospective approach to the second wave, the combination of superb elements of the cold synth that weaves ethereal soundscapes along with the riffing really stands out.

The opening track “I” begins with a soothing choir of sparrows that gives you an impression of tall sycamore trees covered in frost. The track is built on hypnotic melodies and abrasive guitar riffs, the keyboards provide wonderful effects. While the songs are played at a fast tempo, there are also some mid-tempo sections that are full of melodic guitar patterns. The song-writing is highly influenced by the traditional raw black metal, each moment the music spreads with cold tremolo lines boosted by flawless percussion. Forhist eschews the unnecessary experimentation of modern dissonance preferring an expressive and genuine approach.

The second song “II” moves into a faster tempo, Forhist brings many memorable moments to the music the graceful flow of the rhythm guitar provides another feature to the music. The powerful strikes of the drums are unleashed with flurries of blast beats and double bass, empowered by the grim black metal rasps. Vindsval takes plenty of inspiration from the Norwegian black metal bands such as Burzum’s 1994 album “Hvis lyset tar oss“, despite the caustic tone of the guitars and the furious drum beats there are some slow guitar passages that remind me of the musical work of Varg Vikernes. Forhist encapsulates the quintessence of frost-bitten black metal, the choir signing invokes the early style of the Norwegian black metal band Ulver. The guitars hold another potent quality and they are pushed to the front with the heavy sound-emitting sharp tonal riffs like a chainsaw.

All these elements are brought to provide a meditative experience, for example, the keyboards and choirs on the third track “III” create a sedative and atmospheric aura. The elements in the song structure like the rhythm guitars are rather embedded with ethereal symphonies that juxtaposition the modern sound of atmospheric black metal. Vindsval seems to focus on catchy composition, “IV” offers a chromatic scale of textural melodies. This beautiful multi-layered song demonstrates the creative work of the composer from the towering lead guitars the song veers through aggression and swift tempos.

Another gripping aspect to the album that gives it a contemporary sound is the thematic and the emotional feel. With Forhist mastermind Vindsval proves that he has his own creative ways to approach such music, the captivating elements here make the album incomparable to most of Blut Aus Nord‘s earlier work. The swirling riffs on “VI” are soaked in melodic reverberations Vindsval‘s composed works have a propensity of embedding tranquility and haunting melodies. The song begins with rapid blast beats that capture the grim nature of nostalgia despite the repetitive formula the dense riffs frequently switch to immersive tremolos. The whirlpool of rapid riffs on the following track “VII” takes its inspiration from Burzum this outstanding track includes some clean vocal passages that ebb and flow, with the harsh guitar riffs, that are beautifully contrasted with the synth.

The album closure “VIII” sees Vindsval utilizing the harsh elements of the Nordic black metal where the rhythm guitars create the haunting atmosphere. Forhist’s self-titled debut album explores the deep atmospheric spectrum of black metal from bands like Ulver, Sort Vokter, and Burzum. Mastermind Vindsval has proven that he still can wield his magic seasonally or occasionally!! Prepare to immerse yourself in the sonic wintery landscapes of Forhist. If you are familiar with Blut Aus Nord albums like “Memoria Vetusta I: Fathers of the Icy Age“, “Memoria Vetusta II: Dialogue with the Stars Icy Age” and, “Memoria Vetusta III: Saturnian Poetry” then I highly recommend you to check out this stellar album.