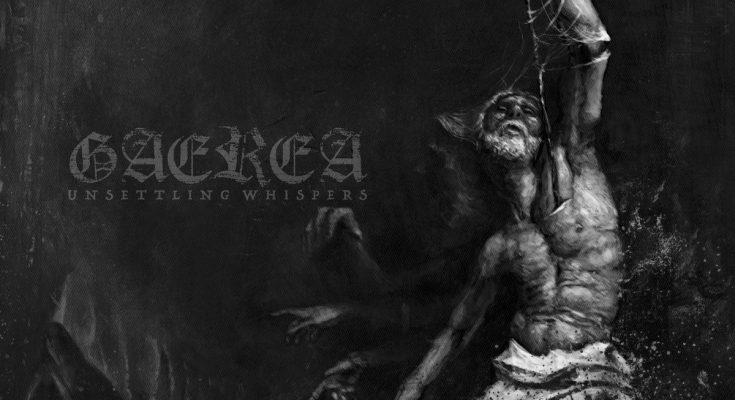 In terms of variation and diversity the Icelandic scene has surfaced with originality and creativity, seemingly capable to shape the sound of future black metal music. Much has changed in the expanding universe of this genre if one compares it with the second wave of black metal. The current establishment of the musical evolution was injected with dark and obscure features that can be distinguished by manifold of forms. And much like the Portuguese black metallers Gaerea who have installed a set of dynamic formulas to their debut entitled Unsettling Whispers, which can be defined as a modern black metal record that has a consequent gist of melodies and excellent song writing.

There are lot of factors which makes this record one of the year’s highlights, first is the powerful effect of loudness, and the energetic sense which allows the musical fragments to sound very integral as a dynamic form of unity. Each track has a unique pattern of substantive guitar layering, added by an extreme sonic blast while pushing further more into unknown regions. The multi elements here are arranged constantly, while each instrument is in consonance to create a massive range of harmony. With the slow and gloomy fashion of sludge works as disoriented intro Svn which offers their musical output. The outburst of creativity is well maintained on this record, though it may not be original but somehow this band sounds fresh and have a clear vision.

And upon listening to their debut album I detected the similarities to Ulcerate in sense of musical evolvement, the vocals are dominated with agonizing growls, the splintered guitar riffs are powerful. Gaerea has crafted memorable riffs relying on creating tenebrous themes that surfaces on the second track Absent. The scale of technicality and valuable innovation are on par, the mid pacing style is constant while enhancing to improve the quality of the melodies. Whispers is another track where the band explores their potential, just when the band adjusts into the mid pacing style the blast beats erupts into chaos. The installation of the textural lead guitars works as a fine aural ingredient.

The album starts with a short ambient passage, and develops into a malefic and lethal black metal, yet with very modern touches. They use some doom elements in order to make their songs sound slow while injecting the parts that stimulates the deep emotions to flow outwards by evoking the pathos. This sonic experimental effort will take you into a journey through beautiful landscapes and picturesque of your own imagination. Extension to Nothingness has excellent tremolo pickings, the drum performance is amazing and igneous, the towering guitar riffs are infused with blackened tones. The final track Catharsis is materialized with the raw power of black metal artillery, focusing on abrasive blast beats and tactical breakdowns. Unsettling Whispers has duration of around 41 minutes of total 7 blackened tracks of obsidian crystallization, this is a great album of how modern black metal should sound like, I highly recommend this album for fans of Uada, Mgla and Dark Fortress.