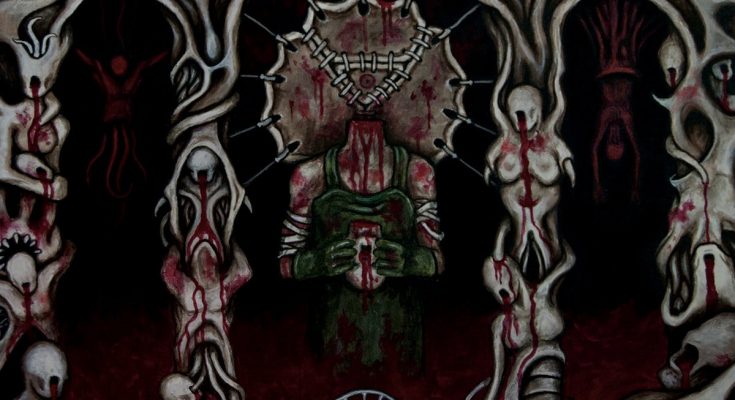 The Finnish death metal scene has been spectacular in the early 90’s with unique acts such as Dimilich, Funebre, Abhorrence, Sentenced, etc. Finland’s death metal has infested the underground scene with originality and gained vast appreciation from fans around the world. And over the decades Finland continued to generate young motivated bands to prove that the Finnish scene is still alive and active. One of the new formed bands is Galvanizer, active since 2013 and have already released a few demos and an e.p. In 2017 Galvanizer was signed to an Italian underground label Everlasting Spew Records. Sanguine Vigil is the debut album by those Finnish grinders who have exerted every effort in attaining an excellent death metal record.

As a result of their productivity, Galvanizer takes a more grinding death metal approach while keeping the crudeness of their sound at a good level of quality. Most of the tracks are precisely combined with reasonable amounts of brutality. Sanguine Vigil contains ten tracks carried with onset of uncompromising death metal. The vocals have some of the best guttural growls and they really sound like many Swedish death metal bands. Mood for the Blade begins with a short segment taken from a horror movie, when the gore grinders burst into a hyper motion. The rough nasty riffs and the shredding blast beats are hammered at maximum speed.

Enjoyment of Annihilation breaks out with havoc, the machine gun blast beats are similar to the trademarks of Vomitory. Sanguine Vigil is incorporated in brutal fulfilment while preserving the segments of putrid old school death metal style. The riffs are taken with violent tone while adjusting the track into a semi mid paced death metal. The tracks are accessible and determined by shredding riffs, the snare drum sounds are subversive.

Deathbeat Deity is an excellent death ‘n’ roll track, perhaps it’s a tribute to their fellow countrymen Xysma. The album is dominated with roots of late 80’s and early 90’s old school death metal influences. Galvanizer resembles the raw extremity of filthy putrid death metal. The album was self-produced by the band, overall the sound production of the album is murky. As for the cover art it was designed by Turkka Rantanen and it reflects the nefarious sense of gruesomeness. The Finnish trio has brought some fresh ideas to their songs, making this debut release one hell of a grinding death metal record. Despite of its short running time of 33 minutes, Galvanizer has released a firm record that can withstand for long. Sanguine Vigil is an essential album for fans of old school death metal.