Hallowed be thy ink talks about the magic combination between metal and tattoos.
In this column we share the stories of people with metal- and/or band tattoos, why they got them and how this band/music style made them stronger.
Furthermore, we talk with metal artists about every aspect of their inks and tattoo art in general. 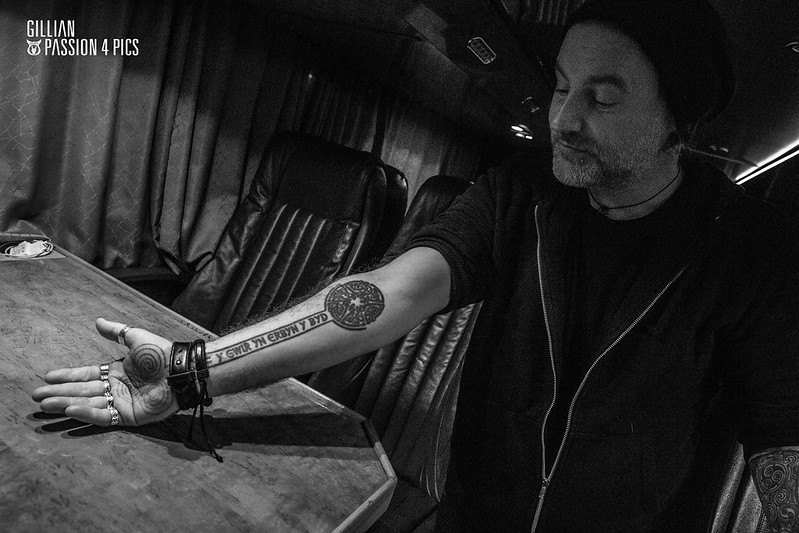 To me personally, tattoos are something beautiful! I love tattoos and I love getting tattooed. There are a few tattoos that have special meaning to me but somehow most of my tattoos are basically ornaments because I just like them very much.

I have been interested in Celts like forever, since when I was in kindergarten. I grew up with it and it has always remained a part of my life. I got my first tattoo ( a celtic thingy on my leg) shortly after my 18th birthday, I was waiting until I was old enough to be allowed to get it. All of my inks are Celtic so they are something I identify with personally. I would not get tattoos that are not Celtic.

There is not much known about it, mostly due to the fact that skin rots when you’re dead. Most of what we find are objects and bones so it’s pretty hard. It is known that the Celts did tattoos, but what they tattooed and why, that’s not known today.

The origin of my tattoo ideas

I have hundreds of images of celtic ornaments on my computer, so I have almost all of them that have ever been found. One of my tattoos is exactly like it was found on the rock. My left arm is a combination of different symbols, found on different objects. One element on my left arm was on a Helvetic Fibula (a brooch/pin), another one was an ornament that has been found in Austria. I also have one tattoo that was originally on a shield, and so on. I use the original images and draw them into a tattoo design, I would not use a design that someone else has drawn.

One time when we played an open air gig in hungary, we arrived pretty late but we also played very late. We were the last band to play so we had hours to wait and drink. I was getting bored and they had this tattoo car, which was actually a very cool idea, it was a caravan and they made a tattoo studio in there. A friend (who is a singer in another band) and me got completely shitfaced during the day and we impulsively went into that bus like “let’s get a tattoo”. The thing is … The tattooer was also completely drunk! I just said “I want a triskele on my right middle finger”and he started. Actually the end result looks more like the logo of the band DRI, but it doesn’t really matter, I had fun. I don’t regret any tattoo because they’re all a part of my life. 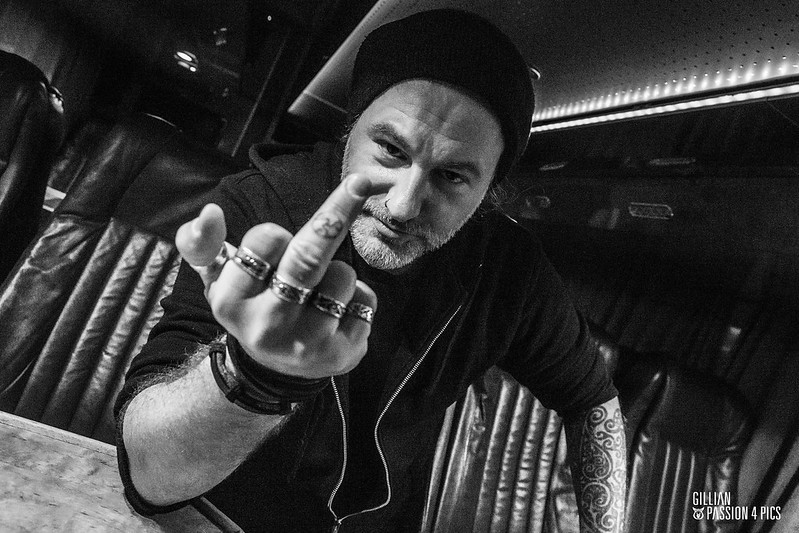 Oath of the druids

The text on my right arm is welsch language. It’s a druidical saying and it means truth against the world, because truth is the highest goal in life. 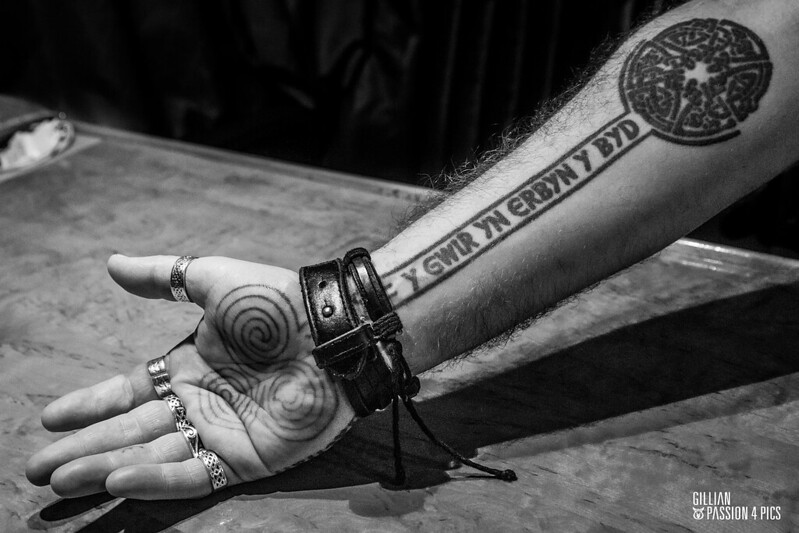 I have tattoos on my handpalms mostly because I just like it, it’s a nice spot fot a tattoo. The one on my .. hand is redone 5 times to have the result you can see now. There’s a different kind of skin on the handpalm. Usually when you get a tattoo, the healing proces takes one or two weeks and 10 % of the colour comes out again. On the handpalms, the healing proces takes about 2 months and 50-70 % of the colour comes out again. So you have to wait and after 3 months you can see what remains and you have to go back to redo the ink again and again and again. After a couple of times, the ink stays. At some point it will fade out such as with every tattoo, only this process also goes much faster here. I kind of like this, because a tattoo shouldn’t look absolutely perfect. Most of my tattoos don’t look perfect and that’s how I want it because like this, it’s closer to how the symbol was used back then (for example on rocks) and it looks more natural.  The one on my right hand for instance, is originally a sign in a huge rock. How the symbol looks right now on the rock is not how it looked originally, just like a tattoo, it also fades. 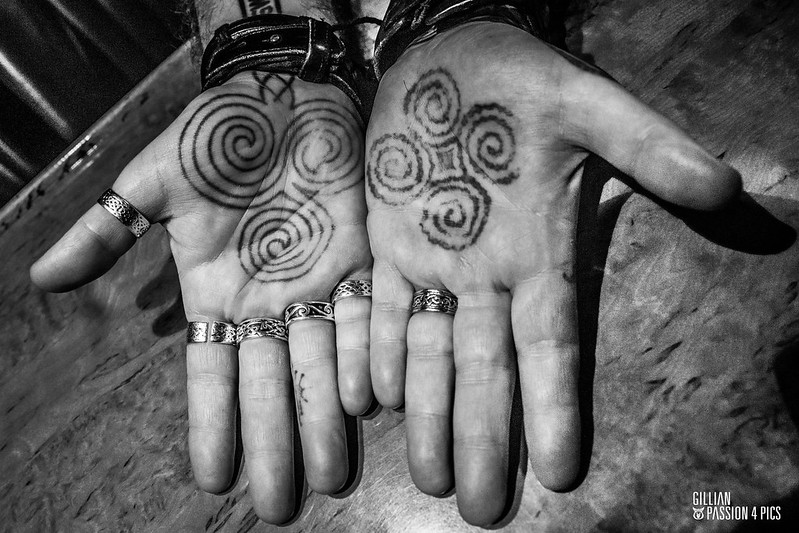 The heart on my left arm is a very significant symbol in celtic mythology. It’s actually a part of the album cover for evocation II. It’s called “ the lord of the animal” and that’s basically what it shows. You can see the animals that were important; a cow, a horse, a bore, a bear a wolf and ravens. In the center of it you see a man, it expresses the role of men amongst all creatures. It wasn’t regarded like we are the crown of creation, unfortunately we live this way now. It actually shows that all creatures are connected and the human is just somewhere in the middle of them, connected to all of them but also depending on them. He’s also handing these animals with his hands which means he can lead them, it’s like a symbiosys, every creature needs the other creature. 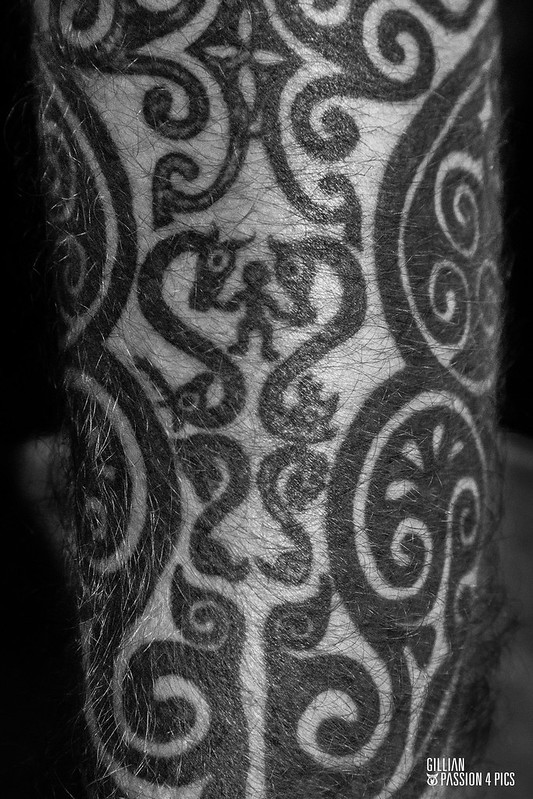 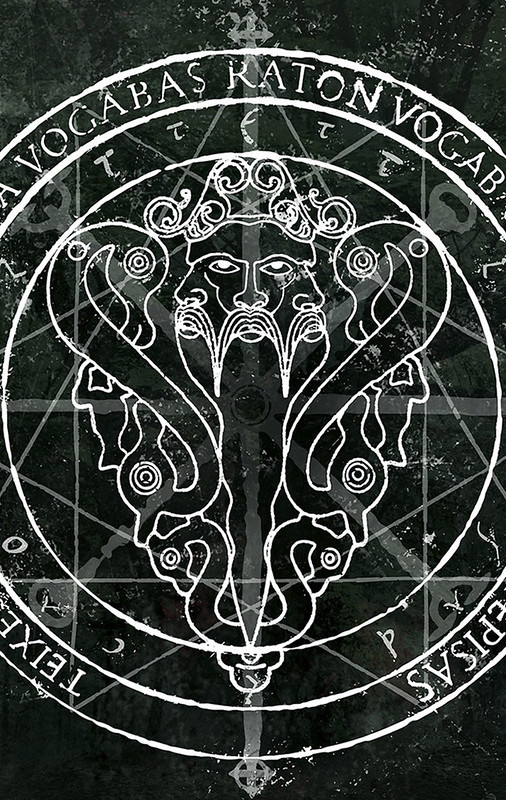 Almost every day we get comments or messages on Facebook from people that did some kind of Eluveitie tattoo; the band logo, some ornaments from our artworks, lyrics,… . Usually it’s something very nice and we feel really honoured. It’s something I would personally never do in my life though. There are also the people who ask you to sign their arm and go to the tattoo artists with that, this is a bit crazy for me. One guy actually has my face on his body, I saw him and was like “dude, what the fuck are you doing, seriously, it’s a bit weird for me. What I have also seen twice is that people who got pictures of my arms, got the exact same tattoo as I have. It is something I have designed for myself and I would like it to remain something personal, that only I have.

Lots of thanks to Chrigel for making his time for this very interesting tattoo conversation! 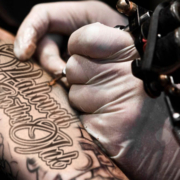