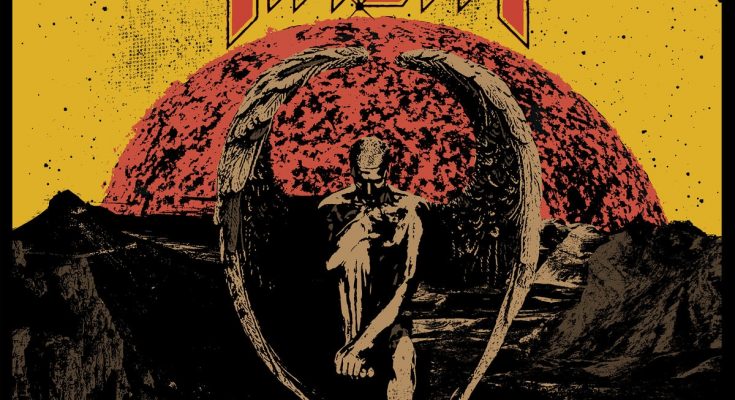 Haunt ignites the flames in the archaic halls of the 70’s retro heavy metal. In such an exceptional and flamboyant style derived from the classic rock/heavy metal bands. The influences of NWOBHM and occult rock are rightly ruled and dominated with the traditional sound of this band. The flair and the tendency of this gifted U.S. quarter is directed by absolute brilliance.

Haunt have been releasing some catchy material lately with their 2017 E.P. luminous Eyes followed by their outstanding debut Burst into Flames released last year on Shadow Kingdom Records which also followed by another E.P. Mosaic Vision released earlier this year.  The second album from the Fresno, California heavy metal band is yet another worthy addition which this quarter band has brought. Led by guitarist and vocalist Trevor William Church who started this band as a solo project. While originally being active with the doom metal band Beastmaker, Church has released around ten E.P.’s and this shows how the man is full of riff ideas.

If Icarus Could Fly is regarded by the talent of the individuals who have been highly inspired by the classic rock bands such as Blue Oyster Cult, Saxon, Iron Maiden and Angel Witch. Burst into Flames was one of the catchiest heavy metal albums that I came across, everything on that record was catchy from the guitar melodies which were highly memorable, and the anthemic vocals of Trevor William Church. The instant appeal of the riffs, solos and the calmness of the vocals were laid with instant hooks and occult vibes that surrounded the album with a beautiful charm.

Haunt now returns again with their sophomore release If Icarus Could Fly, and it’s finely upraised with energetic sensation of the boastful melodies, the opening Run and Hide is elevated with the animated guitar riffs and strong vocals. The new songs are once again attributed with intricate rhythm guitars, and catchy choruses that can be distinguished by the high-wrought melodies and excellent vocal delivery.

Haunt embodies the 80’s heavy metal style and within a short period of time the band has elaborately managed to cement their own sound. With such ingenuity and daring originality, Haunt’s inspirational vibe is what makes them so unique and special. What I love about this band is the surge of bouncy sensational riffs that rushes into your soul and makes you feel euphoric. It’s In My Hands is a proper track, the solid guitar work and song structure which leans towards the tuneful riffs are shaped by catchy melodies.

The solos are mind blowing and yes they’re fast, intricate and designed with quality of the individual flair style. Drums pounds heavily and they’re considerably measured, Haunt is the best example of retro heavy metal band, this is a modern day classic album that channels through different styles from the NWOBHM to NWOTHM. The guitar licks on Cosmic Kiss are equal to Iron Maiden’s early work, this is another stupendous track by Haunt that is led by a charismatic vocals.

However the differences between the two albums is Burst Into Flames was a great crossover between the occult rock and classic rock styles. While If Icarus Could Fly feels more hyped with vibrancy, the zeal of the guitar riffs and drum beats are filled with so much passion.  While the solos are intricate and akin to Judas Priest solos, the traditional quality of the melodies on Ghosts are filled with harmony, the vocals are beautifully laid with an aged fashion. The melodic guitar riffs surge with power and they’re remarkable, production wise both albums have a clear sound clarity.

Haunt ability to craft one beautiful album after another is what makes them so successful today, Clarion and Winds of Destiny contain with dual guitar melodies and the fast solos. The tonality of the solos are harmonious and delivered with class, the retro fashioned heavy metal and their refined form of melodies are top notch. Haunt basically forges a bridge between the modern flair that meets with the 80’s heavy metal style. The eight tracks seems to rule over the mid tempo, along with the mastery of the guitar-ship between Trevor William Church and John William Tucker.

The power of riffs and guitar licks are only a pattern of the great music that the band can compose, the 80’s throwback on the album title track is embodied with memorable solos. The harmonizing guitars are beautifully crafted on the final track Defender and they are provided with harmonizing vocals and emphasizing melodies that will draw your attention in the very final moments of this album. If Icarus Could Fly is another strong follow up to the band’s previous album, Haunt has legitimately contrived and persuasively managed to create their own sound without being musically close to any other band.