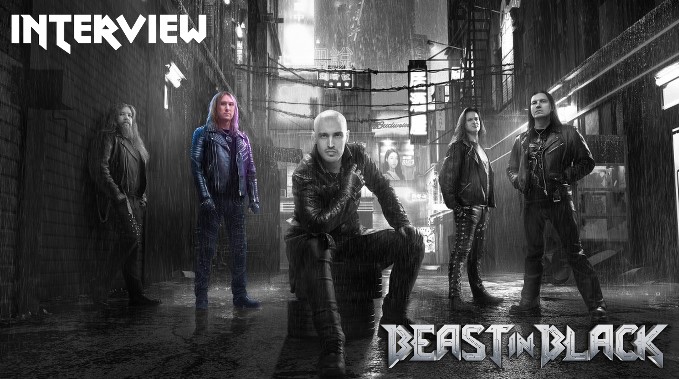 Finland has a rich history of melodic power metal bands with ringing names like Nightwish, Sonata Arctica and Battle Beast. Spawned from that last one, came yet another strong outfit into this world under the form of Beast In Black. With their first 2 releases ‘Berserker’ and ‘From Hell With Love’ they established themselves as an extremely catchy and at times almost poppy version of the classic Finnish power sound. Now on October 29 they are set to release third full-length records ‘Dark Connection’ via Nuclear Blast Records. The right time to catch main songwriter Anton Kabanen to fire off some questions and hear more about the album and his music…

Anton was in a pretty good mood and looking forward to finally reveal the full scope of their new album ‘Dark Connection‘ to the world. Talking about that upcoming release, he told us that it basically wouldn’t have been here yet if not for the pandemic and him having time to write and record it. Diving deeper into the music and themes, we talked about how he perceives what a good song is and how he looks at songs from his perspective. We touched on the heavily cyberpunk themed album, which is basically a return to his form of Battle Beast times, and his whole philosophy about the interaction and connection between human and machine. Besides more of a switch towards cyberpunk with influences coming from the Armitage III anime and Blade Runner movie, this album also has a more synth forward sound than ever, even including clear eurodance sounds, which was what Anton felt the songs asked for. Besides all of that, we talked a bit about the possible stage production when finally touring to promote ‘Dark Connection’, which Blade Runner cut Anton liked more (or not) and what anime/manga story he’d love to try and turn into a Beast In Black song in the future.