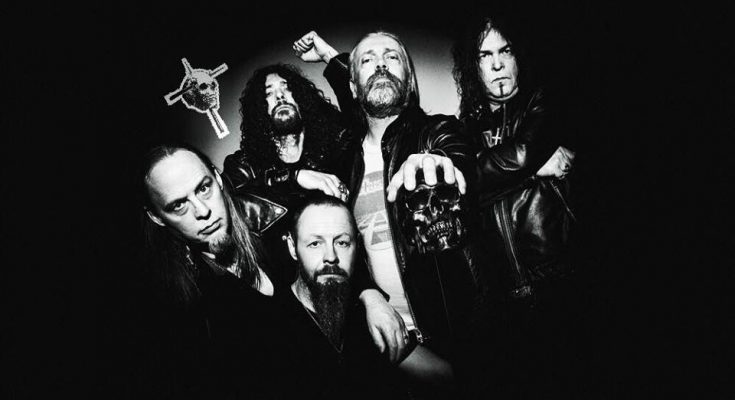 This one’s long overdue, but in no way is it therefore less important. With the big return of Johan Längqvist on vocals, their last release ‘The Door to Doom’ being still quite fresh at the time, and them embarking on a Summer tour across the European continent, we couldn’t resist sitting down with Candlemass‘ very own Mats Björkman. The long time guitarist is thrilled at the return of their not so long lost singer, and had a few interesting things to share on the subject.

GRIMM: So I guess the question that’s on everyone’s mind is: how does it feel to have Johan (Längqvist) back behind the mic?

Mats: It’s fantastic! I’ve been talking about getting him back since 2006 but it just wasn’t the right time. For him nor for us. But now it felt like the right moment. We actually re-recorded ‘The Door to Doom‘ with Johan. That’s the main reason it came out in February 2019 instead of November 2018. It’s one of the best choices we ever made. When we did ‘Epicus Doomicus Metallicus‘ he was just too young. He didn’t really want to be in a band. We were hardly a band at all. It was just me, Leif and Matz (Ekström). We were dedicated to recording an album but Johan didn’t want to fully join Candlemass. Now he’s back, it’s the first time he’s a proper member.

GRIMM: So you’ve been wanting him to join the band for a while now. Were you the only one?

No, everybody’s been saying it albeit carefully. Me, I always said it would happen. But where I seemed to be certain, the others trod a little more lightly. They weren’t against it, quite the contrary, but they were more reserved than I was. They felt we needed a little more time. Johan himself wasn’t quite ready yet. Him and I have always kept in touch and talked a lot about starting a side-project together. But as time went on, we realized it all came down to Candlemass. It was always going to be Candlemass. And now it finally happened.

GRIMM: Was it a smooth transition? Any difficulties? Or was he always supposed to be there?

I hadn’t talked to Johan for six months before I called him up and asked him to come to the studio. He showed up the next day. We did some try-outs and he was in. During the band meeting he said “If you want me back, I’m in one hundred percent”. I can assure you it will be the last time we change singers in Candlemass. That’s for sure. I’m not gonna continue if he’s not in the band. And it’s the first time I say something like that.