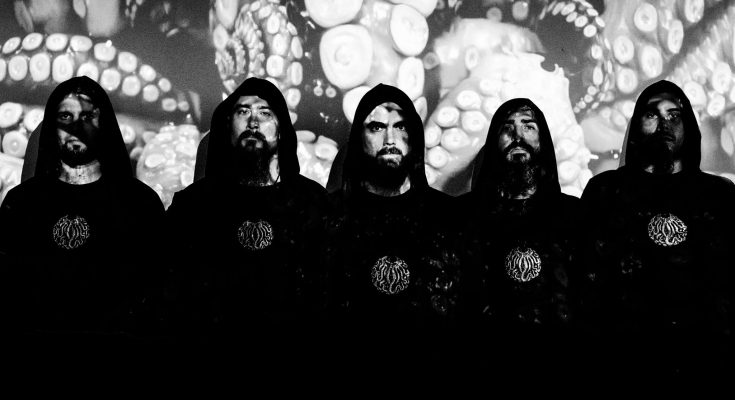 At Hellfest 2018, we had the pleasure of interviewing the full band from The Great Old Ones from Bordeaux. Their lyrical themes are inspired by the works of H.P. Lovecraft.

“Post black metal is a world often defined by pretty melodies and epic song structures that transcend emotion and encourage the listener to get lost in the sound. This isn’t the case, their music is incredibly punishing, twisted and devilish, an evolution on black metal that not even Dead himself could have anticipated. It’s atmospheric to be sure but also touching on emotions most of us didn’t even know we had.”

GRIMM: How are you doing? Are you nervous playing in your home country?

All members: Hi, Yeah good. We’re honored to be playing at Hellfest here for the third time, but yes we’re a little nervous. We don’t play every day in front of so many people so it’s always impressive at that makes us a little bit nervous to! But it’s also a great experience!

GRIMM: You’ve had some line-up changes in the last recent years, recently Jeff Grimal left and Alexandre Rouleau replaced him, how are things going between the members of your band?

Benjamin: There have indeed been a lot of changes in recent years. It’s always complicated and we get a lot of questions, but it also helps to reflect and move forward, to become stronger, and not to make the same mistakes again. And the current line-up is really excellent, the best one since the beginning of the band, whether it’s humanly, musically, and technically.

GRIMM: Do you continue to collaborate with Jeff Grimal on the visual aspect of the band?

Benjamin: Absolutely! When he announced his desire to leave, he told me he wanted to keep doing our graphics and I told him that I too wanted him to continue. And so we just agreed! So we’re going to continue together through another form of cooperation.

GRIMM: What would you say is your biggest inspiration for the music you create? I read somewhere you are inspired by the Horror writer H. P. Lovecraft? What is it about his work that makes him an important part of the band’s identity?

Benjamin: I discovered the author through the role-playing game “The Call of Cthulhu” when I was a teenager. This universe spoke to me right away, so I naturally wanted to know more, which led me to read the short stories and some novels by Lovecraft. He has never left me since.

When I started writing alone the first songs of what would become our first album, I felt emotions similar to those felt during my readings of Lovecraft’s works. The great cities, the space, the immensity of the sea, the hidden horrors, are elements that we find in our music and in the writings of this great author. Since then, Lovecraftian mythology has been the essence of our band!

GRIMM: Where did you get the name “The Great Old Ones”?

Alexandre: The band lyrics are all about Lovecraft stories. The Great Old Ones are deities who rule the world as poor humans praise them, it seemed to us to be the perfect name for our band and the music we make.

GRIMM: Benjamin, did you choose the Lovecraft theme before choosing the style of music or is it the other way around?

Benjamin: When I started writing the songs that would become “Al Azif”, the band didn’t yet exist, but the musical style took first place. I knew I wanted to compose rather atmospheric Black Metal, but I had no idea of the concept at all. But after a while, it became obvious. This sound reminded me of what I imagined when I read the stories written by Lovecraft, both in terms of plot and background. Everything was coherent, no other subject seemed to fit the music when the band was formed.

Benjamin: ‘Sigh’, that’s a difficult question… However, I can mention my favorite stories, which are “The Call of Cthulhu” of course, but also “The Shadow Over Innsmouth”, “The Outsider”, “The Color Out of Space”. I love when Lovecraft takes a very poetic turn in his works, for example with the amazing text “Azathoth“.

GRIMM: Have you seen any films from this universe?

Benjamin: There are not many films directly from Lovecraft’s work, and even fewer of them of high quality. The 2000 version of “Cthulhu’s Call” is a very good film, whose aesthetics and mute side perfectly match. The same organization has also recently produced “The One Who Whispers in the Darkness”, which is, I think, a little inferior but still successful.

GRIMM: Do you prefer recording or playing live?

All members: We definitely prefer playing live. We love the energy on stage. We make music that we want to feel intense, it is often violent, but mostly focused on our emotions. It is very important for us to develop this in a show and share with our fans and audience.

GRIMM: Your latest album “A Tale of Dark Legacy” was released in 2017. What feedback have you received on this album?

Benjamin: The feedback was actually quite good, people like the atmosphere we’ve developed. This atmosphere, a little desperate, very dark and at the same time hovering, is a bit like the principle. The songs work very well live. We are all very happy!

GRIMM: Is there anything you haven’t done yet with the group you would like to do?

Benjamin: So there were things that we did, but didn’t show so I won’t tell you what it is (laughs!). When I compose my songs, I can say to myself, here, I’ll put something violent or something else, but the goal is to generate an emotion. And I assume that, since we know each other all well, I think it will affect them. And if it affects them, it will also affect the public.

GRIMM: What’s the craziest thing you’ve ever seen or experienced at the festivals?

Benjamin: The Motocultor festival last year was special, because we played at midnight on the outdoor stage. It scared me a little bit, because we were planned on the indoor stage and I was afraid it would rain. And it was a beautiful day, not a cloud. Imagine an ultimate starry sky, the forest behind us and it was magical. The atmosphere was fantastic. And if one day we have the opportunity to play Hellfest at midnight (maybe I dream, maybe it will never happen), with the number of people coming to see us, there is a way to have a really special experience for everyone, us and the audience.

GRIMM: Do you have any messages or words of advice for the fans and the readers of our Webzine?

Benjamin: Yes I do. Thank you for the interview. Listen to our music and be sure to read some stories of Lovecraft, in the beginning it starts difficult. But once you have adopted to the writing style, the whole universe makes sense, and makes this reading exciting. There are also other, perhaps simpler ways of approaching the author’s work, such as comic strips, for example. The best adaptation in comics for me will remain “Les Mythes de Cthulhu” by Alberto Breccia. His graphic technique are perfect to represent the unspeakable.

GRIMM: Thank you all for making time for this interview!