“Medusa” is the forthcoming fifteenth studio album from Yorkshire doom metal band Paradise Lost. It’s due for release on September 1st, 2017, via Nuclear Blast Records. Guitarist Greg Mackintosh said of the record, “The new album will be slower, sludgier and more doom filled than ever before.” He adds that it will be “eight riff laden monster tracks of sheer Northern misery.” It will be the first album with new drummer Waltteri Väyrynen, who took over from Adrian Erlandsson after the release of “The Plague Within” in 2015. GRIMM Gent had the chance to talk to drummer Waltteri Väyrynen and guitarist Aaron Aedy from Paradise Lost at Alcatraz 2017.

Are you ready for the show later here at Alcatraz?
Aaron: Always, best bit of the day!

Your 15th studio album is due for release on the 1st of September. Are you satisfied with the new album?
Walt: Very!
Aaron: We are very excited. We’ve been listening now for a few months and we can’t wait to let others hear it. It’s still exciting to hear what other people will think of it. I’m really looking forward to playing the album live! Tonight we will play a few songs from the new album as well.

The new album is called ‘Medusa’, she is also on the cover of the new album. Is there a special reason you choose her?
Aaron: Originally in the old days when Greg wrote songs he used a sampler and the working titles were 8 characters long. There was one called Medusa and Nick thought it would be nice as the name of our new album. Nick was intrigued about a greater meaning and thinking more along the lines of what Medusa represents metaphorically. Medusa as a title works in many ways. When we looked up the description of Medusa – Attempts to avoid looking into Medusa’s eyes represents avoiding the ostensibly depressing reality that the universe is meaningless – the title was pretty much in the bag.
Walt: Greg found Branca Studios and they have a good eye for design and their modern take on retro artwork really fit the bill. What they have come up with is a blending of colorful yet retro styling, whilst maintaining the classic Paradise Lost feel.
Aaron: I can’t wait to see the cover on our new t-shirts. I will get a t-shirt myself! I’ll pre-order it! (Laughs)

I have noticed with the previous album you returned to death-doom genre. Over the last 29 years you’ve used a lot of different genres (gothic, electronic, industrial and alternative). What made you go back to death and doom?
Aaron: I’ve been buying the last 10 years all of the albums I had as teenagers, the albums that are remastered. It makes you think of that time again and makes you feel younger. It felt quite natural to go back, each one is a steppingstone to the other albums we make. We are a two guitar band and we like heavy music.

So the previous album is like a time machine back to the beginning?
Aaron: I think Nick also went back to death/doom because he could do growling and singing at the same time. He is always worried when he does a song he has to do both the singing will not go well after growling. With that album he has proven that he can and it has given him confidence.

Paradise Lost is also an epic poem from the second half of the 17th century by John Milton. What is so special about that poem that you choose it as the band name?
Aaron: Nick came up with the name. Around April 1988 we were a group for about 5 weeks and were looking for a name. We decided to keep it until we find something else, but we didn’t. Then we did a gig a few weeks later and decides we couldn’t chance it anymore, so we kept it. (Laughs) It’s a good name you know. Nick studied literature I think at school, it is an epic grim poem. (Many laughs, because we were wearing GRIMM Gent t-shirt en they were pointing at our name.)
Walt: Nick also made the first logo of Paradise Lost.
Aaron: Yes, Nick was an graphic artist and made our first cover and logo of our demo and Greg was a printer back then. He printed the covers! Greg was an ‘audiovisual reprographics technician’, that was actually his job title.

Do you play in other bands?
Aaron: I don’t, but the others play in different bands. Nick plays in the Swedish death metal band Bloodbath.
Walt: Me and Greg met actually in one of his side projects. It is called Vallenfyre. I do also some session gigs with different bands.

Walt, how were you asked to join Paradise Lost? You’re so much younger than the other band members.
Walt: I met Paradise Lost because of Greg, they were in need of a drummer.

If you weren’t a musician, what would your job be?
Walt: unemployed, I don’t have a plan b… (Laughs)
Aaron: I would be an electronics engineer and also do programming. I enjoy programming, I would probably do that. Also, they’re always looking for new drummers so Walt would be fine if he didn’t play with us.

Do you have a favorite song to perform live?
Aaron: It changes sometimes during different tours, but at the moment ‘faith divides us’ and from the last album ‘beneath the broken earth’. It is the slowest en most miserable song we’ve ever done and we are playing it this summer at the festival in the bright sunshine. It is so grim and miserable, it is perfect for the summer. (Many laughs)
Walt: How funny, we were just talking about it backstage like 10 minutes ago. For me it’s ‘from the gallows’ or ‘blood and chaos’ from the new album.

What’s your biggest inspiration for the music you make?
Aaron: When we started, we wanted to be a mixture of Celtic Frost, Sodom, Kreator and Candlemass. But our drummer was a diabetic and the fast sessions he couldn’t do, so we became a slow band. He actually made our sound without realising it. We like also a lot of the classic metal bands or death metal bands of the 80’s. Good times, I’m an old bugger. (Laughs)
Walt: To be honest, Paradise Lost. Obviously I can’t say this anymore, because I play in the band now. But I grew up with Paradise Lost, Type O Negative and Katatonia.

Do you have a ritual before going up on stage?
Aaron: No, we all do different things. Mostly we talk, drink and laugh together backstage. But I stretch a lot, because I’m an old man and Greg drinks a bit… (Laughs) We just go and have a good one. We’re a close group of friends actually, we just sit and laugh all the time.
Walt: I warm up, nothing special.

What’s in store after the release of the new album Medusa?
Aaron: touring, after September we have a big tour in Europe until November. Afterwards it’s touring in Australia until Christmas. Busy busy. Next year we are still planning. If the album does really well, busy busy. Of it does just well, busy.  If it does shit, not so busy. (Laughs) No, it will be good, we’re excited to bring out Medusa! I think it’s good.

Do you have a message for our readers?
Aaron: Thank you for still being interested in our music after 29 years. It’s still humbling after so long that people still like our music. Thank you for your support.

Thank you so much for this interview Aaron and Walt! Good luck on stage and with the new album Medusa! 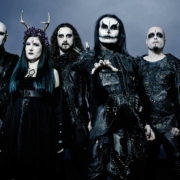 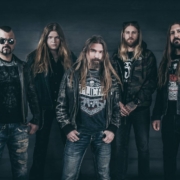 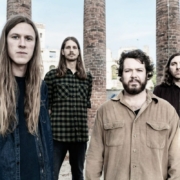 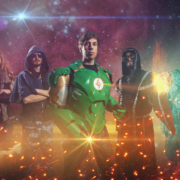 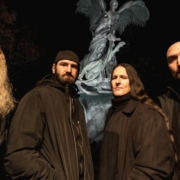 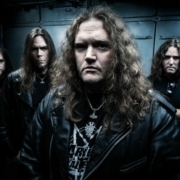