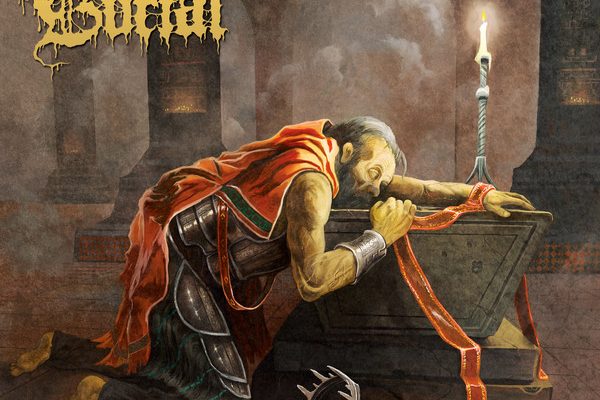 Both Asphyx and the band Death have had huge inspiration on the new wave of old school death metal. It didn’t take me long to realize these strong influences on the second outing by the British death metal outfit Live Burial. In fact, there is a direct propensity to early Dutch death/doom, upon which the New Castle based outfit was able to construct a characteristic song structure. Two years after debuting the first length album ‘Forced Back to Life’, released through Dunkelheit Produktionen, ‘Unending Futility‘ sees the band taking bold measures towards this rotten sound, without aborting the slow transitions of doomy passages. These inspired alterations of nineties death metal are effectively fulfilled. Live Burial provides the listener with the nostalgic tone of the early Death ‘Leprosy‘ era.

The fretless bass that buzzes with energy on the opening track ‘Seeping into Earth‘ is achieved by Lee Anderson and his skillful flair is well executed throughout the album. The approachable growls of vocalist Jamie Brown sound identical to Asphyx front man Martin Van Drunen. In this refined state, the band presents a bone-crushing death metal record. Live Burial is more than a hybrid entity. The petrified sense of the raw guitar riffs grows heavier with each moment. ‘Condemned to the Boats‘ is structured upon intensive riffing while the fretless bass guitar resounds clearly in the background, adding a dimensional aspect to the music.

Sometimes the song layers are stuffed with catchy guitar hooks. Each of these tracks is firmly constructed by the pounding drums. After the second track Live Burial brings varieties from the U.S. and the Dutch old school death metal. ‘Swing of the Pendulum‘ is reinforced with direct aggression where the emphasis is laid on the growls and the dual guitars. The band maintains a high level of consistency and they have succeeded in creating a rotten old school death metal record. With such tracks like ‘The Crypt of Slumbering Madness‘ they evoke the essential elements of death/doom metal. On many grounds guitarist Richard Codling and Rob Hindmarsh integrate a focus on the guitar techniques. Therefore, many of these guitar lines and rhythmic hooks retain a distinctive quality, evoking the nineties classic style of doom metal. It’s clear that the musicians reflect on representing the Dutch style, either by adding catchy lead guitars or emphasizing the slow tempo.

This kind of approach draws on creating a gloomy feel that surges into the thick growing atmosphere of the dense riffs. From the flawless guitar execution, including the bass instrument, Live Burial boasts remarkable creativity and song installation. The abrasive tone of the vocals has a harsh effect on the songs and they’re fitted to the overall sound. This unique and unsophisticated style of death metal isn’t quite common. Few bands perfecting this style truly understand how to achieve its old school technique. With the tremolo pickings inserted into the song structures, the riffs perfectly interflow with the slow rhythm. ‘Rotting on the Rope‘ kicks hard with the full focus of the grinding drums utilized by Matt Henderson, switching between blast beats and double bass, while the harsh growls provide howling screams. Even with such heavy aggression ‘Unending Futility‘ sounds rotten to the core.

As much as the band nourishes on the roots of death metal they don’t sound familiar to the common trend of British death metal. Verging on the final tracks such as the instrumental piece ‘Winds of Solace‘ sees the band fuse the fretless bass guitar and the acoustic tunes. However, the closing track ‘Cemetery Fog‘ contains plenty of crushing riffs as the persistent pounding of the drums gets louder and louder. The thick concrete slabs of powerful percussion are enough to break your bones when the track ventures into slow and fast tempos alike. Compared to their debut effort, I must say that the sophomore release from the New Castle quintet had me speechless.

Despite the album duration fixed at forty minutes, I couldn’t find any flaws in the songwriting and the instrumentation. This is one of the best releases that come from the Asian underground label Transcending Obscurity Records. Since its recent release date ‘Unending Futility’ has received excellent recommendations from the press. Therefore, I highly recommend this album for fans of Asphyx, Death, and Morgoth.