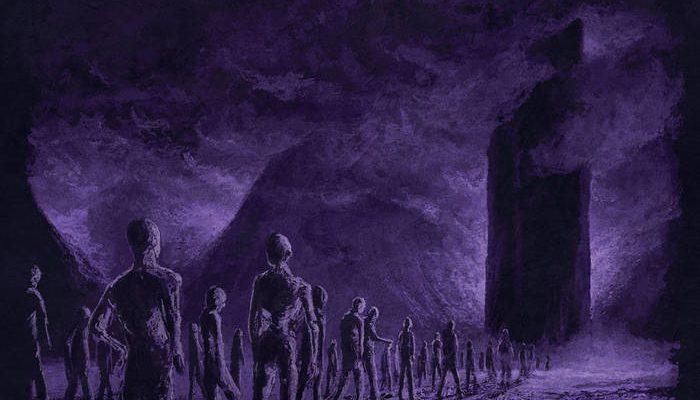 While German death metal bands in general lean more towards the Swedish style of HM-2, in the last few years this scene has brought some exceptional bands such as Sulphur Aeon. Even though this cavernous style of death metal has already been mastered by the U.S. death metal groups, the Bavarian death metal outfit Nekrovault brings something truly menacing with an outstanding quality. Two years after releasing their EP ‘Obscure’ and ‘Cursed by Ascended Darkness‘ the Germans return with a debut album ‘Totenzug: Festering Peregrination’. The current lineup includes P. (bass/vocals), V. (drums), S. (guitars), and SS. (guitars). Established three years ago, Nekrovault‘s musical talent and creativity are well demonstrated on the debut. ‘Totenzug: Festering Peregrination’ will take you into a dark journey to the murky depths of the miasmic abyss.

The album cover itself conjures dreary imaginative visions and the horrors of the apocalypse. It sets a horrific tone for the songs. Musically the debut has an apocalyptic quality filled with demonic screeches. The unworldly effect of the ambiance precedes the slow menacing atmosphere of the crushing riffs. Much like the British death/black metal act Abyssal, Nekrovault invokes an oppressive atmosphere of slow churning riffs. The opening track ‘Totenzug-Funereal Hillscapes’ brings in elements of dissonant death metal with a menacing atmosphere of cavernous growls and slow brooding guitars.

The sudden eruptions of the tectonic double bass shift to loud reverberations and the pace builds up gradually. The grim suspense encapsulates the songs. For example, ‘Sepulkrator’ brings the unpredictable twists of the shrilling vocals and the cavernous growls. Nekrovault provides many crushing riffs. The song structures are laden with monolithic guitars. The debut also channels the atmosphere of death/doom metal where the German group reveals the depth of their songwriting. Each track has an approximate length of five to eight minutes which allows the songs to shift smoothly.

Nekrovault‘s debut is multi-dimensionally focused on chaotic riffs and dissonance. From the first moments of the third track ‘Psychomanteum – Luminous Flames’ Nekrovault moves towards a straightforward blast beast. The guitars form layers of dissonance and furthermore, the elaborate arrangements of the guitars display the talent of the band. Swaying back and forth on the edges of death and black metal, they carry on by extending into nuances of death/doom metal. Nekrovault slithers from atmospheric death metal to brutal death metal by focusing on intricate songwriting.

‘Totenzug: Festering Peregrination’ is dominated by unhinged tempos with monolithic song structures and low guttural growls. Nekrovault creates many ominous moments where the songs meander through the dense atmosphere. And while the approach here is similar to Abyssal, ‘Pallid Eyes’ is achieved through straight forward death metal. Despite the unhinged tempos, this track shifts smoothly from mid-paced to straight blast beats. Intense heaviness and the bold complexion of the slow churning riffs are maintained by such masterful balance. Another highlight ‘Basilisk Fumes’ spews out venomous air. On this track the guitars are applied with tremolos and a rapid drum pace.

There are many variations to be found within the six tracks of the album that transform them into an uncanny twist of death/black metal. Concerning the slower moments, the band brings similar hints to the Finnish death/doom group such as Swallowed. Throughout the duration of the 43 minutes, Nekrovault keeps the listener engaged by creating a bleak atmosphere that reflects the horrific album cover. The album ends with yet another monolithic and crushing death metal track. ‘Eremitorium‘ begins with a twisted and violent drum pace and the guitars form an ominous atmosphere.

The most memorable moment is when the rhythm guitars intertwine and the soaring melodies lay the hooks to the listener. ‘Totenzug: Festering Peregrination’ is a ritualistic reverberation of diabolical death metal. This is one of the best death metal releases of the year. Nekrovault‘s debut album perfectly blends many obscure shades of death metal: from the pulverizing old school guitar riffs over an atmospheric haze of cavernous death metal, carried by jarring dissonance, to this obscure style of old school death metal. If you like death metal in the vein of Abyssal, Swallowed and Incantation, then look no further!