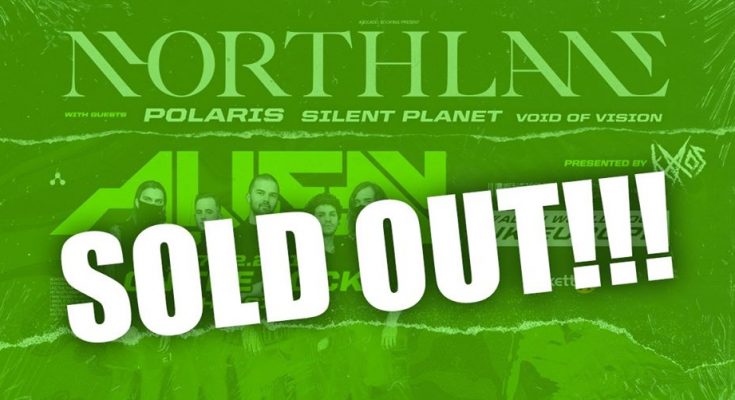 All Things Live Finland seems to be doing something right. They booked the Australian metalcore outfit Northlane for a very first visit to the country. Clearly that was the right choice, because already in Summer the tickets were running out fast. Together with country mates Polaris and Void of Vision they came to bring a true showcase of what Down Under has to offer of metalcore to a completely sold out On The Rocks.

When we arrived at the venue shortly before the doors were open, we came to the surprising sight of a line forming all the way from the inside entrance to outside. It’s rather rare that this many people show up already from the openings band on, so something must be going on here…

The night got kicked off with the young guys of Void of Vision and it got kicked off hard! As soon as the first notes emerged from the speakers, half of the crowd turned into a moshpit. To be honest, I was quite impressed with how quickly the band got the crowd to go nuts. Finnish crowds are not necessarily known for their activity during a gig…

Setlist:
Year of the Rat
Hole In Me
Babylon
Grey Area
If Only
Splinter
Kill All My Friends
Ghost in the Machine

And just when you thought it couldn’t get any wilder, there came Polaris. The recipe was quite the same: dudes from Down Under and energetic metalcore. Clearly these guys were pleased as well to be able to hit a Finnish stage for the first time and gifted us with a banger of a show. As good as every single one of the guys radiated a huge amount of energy our way, which was answered by a surge of energy coming from the crowd as well. Moshpits? Of course! But add the regular crowdsurfer into the mix this time. The music itself talked even more to me this time around, with the added more melodic side compared to the band before them. A damn good band that you should keep your eyes on. When their latest single ‘Masochist‘ hit the speakers, the room exploded even more and the band was impressed that so many already could sing along to their new stuff. Be ready for their new album ‘The Death of Me‘ out next year in February!

And then it was time for the big ticket of the night! Northlane has been gaining popularity all over the world with their unique music and stellar live performances. But with the recent release of the ‘Alien‘ album, they really took a big step forward in their careers. You can still hear the signature melodic metalcore sound of the band, but they experimented a bunch with additional elements and infused the songs with for instance the personal struggles of vocalist Marcus. The result is a fresh sound packing a shit ton of emotion that will appeal to anyone with an ear. And live that energy, raw emotion and passion gets brought across perfectly. The lights go nuts with all kinds of deep colors, part of the band is wearing their signature face masks and the atmosphere is almost visible. Marcus regularly sought connection with the crowd and seemed to try to grab the hand of every single crowdsurfer coming his way (and there were plenty, believe me), as a jester of gratitude and love. These guys absolutely destroyed the place and turned On The Rocks in a steaming hot sauna, I’ve rarely experienced such a huge energy with a Finnish crowd and I loved it! Northlane, hope to see you back soon!

For more pics of the show go here.