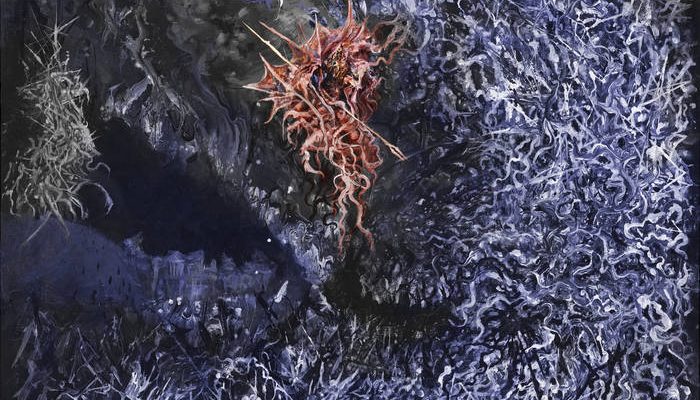 Denver based death metal outfit Of Feather and Bone unleashes their third album ‘Sulfuric Disintegration‘ via Profound Lore Records. The return of the Denver trio comes two years after the sophomore release ‘Bestial Hymns of Perversion‘ . The resulting output of the new album goes beyond expectations. OFAB was formed in 2012 upon the release of their debut album ‘Embrace the Wretched Flesh‘. The band shifted their sound from hardcore punk to straight death metal. ‘Sulfuric Disintegration‘ takes natural steps of progression towards an uncompromising brutality in which the U.S. trio Alvino Salcedo (bass, vocals), Preston Weippert (drums) and Dave Grant (vocals, guitars) offer an obscure and murky take on extreme metal. The third album brings us closer to a more primitive realm of death metal where the latest effort sees the band establishing their own grimy platform upon which to deliver a concrete slab of brutality. OFAB‘ss lyrical themes are centered upon the Aztec underworld mythology, which explains the extreme domain that the band revolves around. The songs on the album reek with the putrid evil of chaotic death metal, driven by the barbarity of meticulous blast beats.

‘Sulfuric Disintegration‘ somehow differs from the sophomore although there is a deeper viciousness within the six new tracks. OFAB has combined dark dissonance with drums being fired by constant blast beats and heavy chunks of death metal riffs. The first change comes in the tone of the vocals that utter screams and a deeper growling. The opening track ‘Regurgitated Communion‘ storms with fury and chaos in all its frenzied madness. The Denver trio also experiments with the elements of war metal and primitive death metal in one massive combo assault. OFAB wastes no time with intros. The guitars on the album create a heavy chugging sound while the drums unleash massive blast beats and the double bass is sufficient to break your bones.

‘Sulfuric Disintegration‘ explodes in a fury where the trio demonstrates a savage and extreme barbarity that can be compared to the likes of Pissgrave and Infernal Coil. The growls play a fundamental role in depicting a horror sensibility on the second track ‘Entropic Self Immolation‘. The guitars are applied with thick sludgy riffs, prone towards mixing the sludge with death metal. The drums, in general, provide savage levels of bestiality and they have a common particularity to grindcore. ‘Noctemnania‘ offers many tempo variations. The track fuses the bestial elements of the first wave black metal. However mid-way through the track, the murky atmosphere fumes as the guitars provide a dense and heavy noise that ejects bleak dissonance into the atmosphere. OFAB blends other elements from death/doom metal: even at their most savage wake they evoke the slow and the heavy plods of doom.

‘Sulfuric Disintegration‘ is formed by dense layers of obscure guitar riffs, yet the trio shows how they can mold the primitive fury of death metal to create utter chaos led by inhuman frenzies growls. ‘Consecrated and Consumed‘ gives the listener a clearer idea of musical accomplishment. Where the sophomore surprised the fans with its sudden musical transition, the latest album exceeds all expectations.

‘Sulfuric Sodomy (Disintegration of Christ)’ continues with a maniacal drum pace and frenzied screams that simulate an unholy ritual. Some of the elements that shine on the elements are the obscure tone of the guitars that projects distinguishable tremolos. The riffs on the album are brought with greater focus if one compares the guitar tone to the previous album. The final track ‘Baptized in Boiling Phlegm‘ is a great song title and delivers a cruel and barbaric performance from the trio. ‘Sulfuric Disintegration‘ is achieved through crude blast beats and diversified riff work that adds a distinctive tone to each of the six tracks.

While this may not be my preferable style when it comes to death metal, the U.S. trio from Denver, Colorado has once again offered their latest inspiration leading them to unleash one of the most chaotic and devastating death metal albums of the year 2020. ‘Sulfuric Sodomy‘ is constructed on titanic compounds of buzzing chunks of dense guitars. Despite its minor nuances to death/doom metal, the newest album once again drifts away from the familiar domains of cavernous death metal.