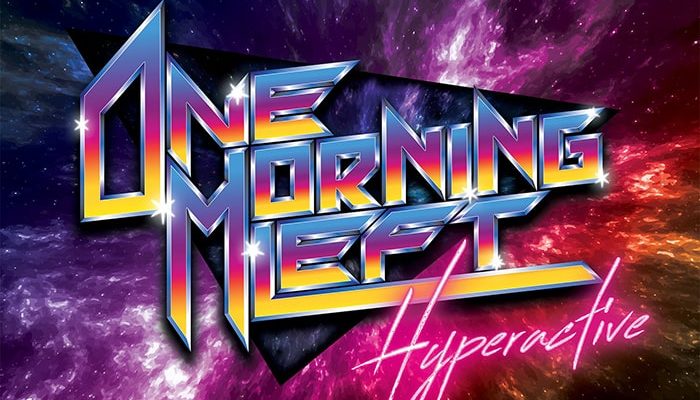 Those who are familiar with One Morning Left, the weirdos of the Finnish metalcore scene, know they’re a bunch of dudes that live to have fun. If you’ve ever seen them bounce around on stage, that boundless and positive surge of energy permeates through everything they do. And you’ll also know they don’t shy away from taking the piss out of everything that is cliché in the metal(core) scene, poppy tunes and partying like there is no tomorrow. At live shows they also play almost every single time a great party/metalcore rendition of Michael Jackson‘s 80’s hit ‘Beat It’ or kick in some Bon Jovi.

With their new album ‘Hyperactive’ they seem to have infused their metalcore with a persistent love for the tacky 80s rock and synthwave sound. It’s like the eighties has barfed all over One Morning Left in neon and left them permanently stuck somewhere between that era and today. Straight from opening track ‘Ruby Dragon’ with its very ‘Thriller’ sounding opening you get pulled into that newly created realm of kitsch and fun. That first track still holds a lot of One Morning Left‘s signature sound though: churning guitar riffs, vocalist Mika‘s dirty hardcore screams and growls that are countered with guitarist/vocalist Leevi‘s spanking clean vocals in the incredibly catchy chorus, driving rhythm section through bass and drums, electro infused bridge followed with the typical breakdown… just that touch of 80s is omnipresent.

And that 80s sound gets regularly cranked up even higher, like in the extremely fun ‘Neon Highways’ that has an even better balance between the modern metalcore and 80s vibes or the similarly fun earwurm ‘Sinners Are Winners’ that starts with a classic 80s sleaze rock/glam metal “C-c-c-c-c-c-mon!” scream.

You can still find a couple tracks that hark more towards their more pure hardcore/metalcore past (electro-infused still, that is), like the pounding ‘Drowned God’ that has a breakdown that will literally break down the place whenever they’ll get to play it live, the blistering ‘Live, Laugh, Love’ that takes you by the throat and drags you on a damn wild ride at times bordering deathcore madness and nastiness or their more partycore sounding ‘Worry Less, Dance More’ (there had to be at least one track on the album about dancing). That one is also one of the tracks that really stick out with a breakdown that almost is as hilarious as their flute breakdown on the older fan favorite ‘You’re Dead, Let’s Disco’, just check it out. It’s absolutely fanfuckingtasting!

It’s hard to name any songs as my favorites since all of them are damn catchy as hell. They all manage to blend that eighties sound through feverish metalcore to perfection, resulting in a bit over half an hour of a whole lot of fun. A few stick-out tracks still are ‘CREATVRES’ in which the 80s are taking over, producing a very radio friendly song with a shining role for the poppy clean vocals from Leevi, highly amusing synths and an immense sing along chorus, and ‘Downfall’, which features a guest appearance from the Finnish rapper OG Ulla-Maija and Dj Massimo and is absolute fire!

One Morning Left has been a band that I’ve loved seeing on stage with their energetic and highly fun shows. But with their new album ‘Hyperactive‘ they really struck the right chord with me. I predict that a lot of these songs are going to end up in my regular rotation. They’ve masterfully blended everything that was good from the eighties into their already very catchy and infectious brand of metalcore and created a neon monster. After playing this album over and over again while preparing for and writing this review, I’ve gotten pretty much a boost of energy and I’m ready to go party with these guys! Bring me a live show of theirs! Now!

One thought on “One Morning Left – Hyperactive”