You are here: Home1 / Pick Your Poison2 / PICK YOUR POISON: Bliksem’s Rye The Lightning When we visited the Just Beer expo in Kortrijk last year we ran into the guys of Brouwerij Bliksem (“Lightning Brewery”) from Breda (Netherlands). Their bright colored labels drew our attention and on closer inspection we noticed all the cool names of their beers (Rye The Lightning, Saison in the Abyss, Pale Rider, …). Something told us these hopheads liked the heavier spectrum of rock music. And indeed, on their website they state they believe good music and good beer goes together hand in hand and both should be loud and uncompromising! We present you Bliksem’s Rye The Lightning as a first introduction!

After popping open the bottle and pouring its content in a glass, we get a nice lasting white foam head. The color is orange gold. Light effervescence is noticeable in the glass. The aroma reminds of herbal tea, light caramel, resin and fresh grapefruit. It smells promising and refreshing. The first sip reveals medium to high carbonation on the tongue and a thin to medium mouthfeel. This is the only aspect that kind of disappointed us to the Rye The Lightning. The rye grain definitely adds character to the beer, but not enough body. The caramel and resinous notes from the aroma return in the flavor, creating a pretty strong copy-match between aroma and taste. Hopheads shouldn’t despair, the beer holds a powerful bitter hop punch at the end. Mostly grapefruits shine through, but there are also some light passion fruit esters that add a little acidic touch.

The Rye The Lightning is a very drinkable, refreshing IPA, low in alcohol with its 4% which makes it perfect for hot summer festivals to keep on going the whole day. Personally I would have preferred a little more body, but that’s my only complaint about this thrashing session IPA!

The backside of the Rye The Lightning contains a lot of fun little details. First of all, just like on all their beers, your read the tasting tip. The brewers recommend to pair this beer with Metallica‘s Ride The Lightning (duh). The label further reads in big bold letters it’s a ‘Shocking Beer’ with lots of lightning bolts underneath it. In the row of official pictograms concerning recycling of the bottle and the warning for pregnant women, you also find the symbol of the metal horns and Metallica‘s coiled snake logo from the Black Album. Fun little additions that might go unnoticed in between the standard obligatory info.

It is difficult to translate the brewers’ comment on the label in English in the same vein as they originally wrote it. Their particular choice of words is very Dutch, but will appeal to both Flemish and Dutch readers on both sides of the border.

“A summer hop shot that is very tiltable thanks to the addition of the hops. Ideal with some hard music or a sunny terrace, but preferably both.”

After all the reading on the backside of the bottle, it’s time to enjoy the front label of this beer. The light blue label makes it easy to spot in a row of beers. Lightning bolts run across the artwork and the neck of the bottle which states the brewery’s name. In big letters the label states the beer’s name and its style as ‘session rye IPA’. The nicest detail, however, is the electric chair that forms the centerpiece of the artwork. In my opinion it makes the artwork the perfect visual tribute to the song the beer and its name refer to. Try not the hear that striking intro riff or Hetfield singing “Death in the air, strapped to the electric chair”, when looking at this beautiful bottle!

The choice of song here is quite obvious I presume. The Rye The Lightning begs to be opened on a hot summer day during a festival. So instead of the studio version, we give you the live version of Ride The Lightning during A Day On The Green in 19-fucking-85. Everyone say “Hi Cliff“! 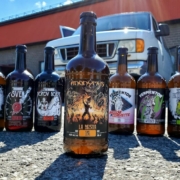 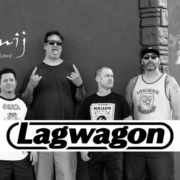