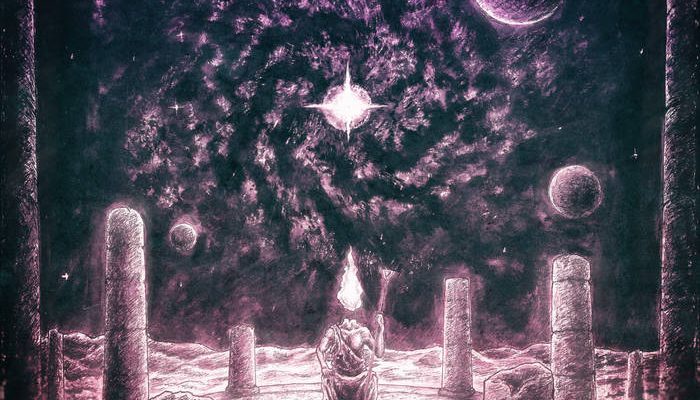 Hellenic black metal act Prometheus returns with a sophomore release ‘Resonant Echoes from Cosmos of Old‘. The trio this time has elaborated on their craft as they delve deeper into the horror stories of H.P. Lovecraft. Among many bands that found their inspiration from the Lovecraftian mythos such as Sulphur Aeon, Unaussprechlichen Kulten, Morbid Angel, or The Great Old Ones, Prometheus takes a measured leap to unveil their devotion to the uncanny creations of the American writer. Even though the band was formed over a decade ago they have emerged as a rising star of chaos from the underground scene of Thessaloniki, Greece. But unlike the unorthodox black metal bands of Greece, their music channels the Scandinavian style, which somewhat differs from traditional Greek bands.

While this unusual trait has somehow rendered their sound more complex, their directional approach to extreme metal has given them a particularity to move past the hallmarks of Hellenic bands. During the last few years, Prometheus molded its sound by merging the colossal elements of blackened death metal and black metal. The ferocious energy of the music streams through swift riffing, while guitars create a dark cosmic and spectral atmosphere of alien soundscapes. The concept art of the album cover gives the viewer another dimensional prospect of what lurks beyond the corners of space and time.

‘Resonant Echoes from Cosmos of Old‘ conjures an uncanny mood for fans of Morbid Angel and The Great Old Ones despite the vast differences between them. Prometheus have carved their own gateways under aligned stars of chaos. The gigantic sound of muffling drums and monstrous growls thunders along rippling riffs invoking demonic Lovecraftian imagery. Album opener ‘Gravitons Passing through Yog-Sothoth‘ churns out like a swarming mass with swirling tremolos forming layer upon layer of atmosphere. Diverse and dynamic rhythm guitars add a terrestrial effect while the creative touches of synthesizer generate otherworldly undertones. These stylistic ranges from the nineties black metal are remarkable.

The ability to shapeshift from black metal to blackened death metal gives Prometheus a kind of a hybrid sound especially apparent on ‘Azathoth‘. This feat is mainly achieved by vocalist Aggelos, but the creative hands of bassist and guitarist Esophis play a big part therein as well.

Once the third track ‘Astrophobos‘ begins, the guitars sets up an arrangement by combining slow doom metal dirges with funereal melodies of black metal. Gravity-defying tremolo strums gyrate like massive swirls while the spacey flair of the bass guitar buzzes in the background. The track takes many twists and turns, especially when the synthesizer and lead guitars conjoin. Prometheus‘ unique songwriting provides an immersive experience. The album title track takes a complete shift towards the progressive death metal. When combined, the styles create a deep cosmic reverberation. ‘Resonant Echoes from Cosmos of Old‘ is mixed with the aesthetics of nineties black metal and the modern style of blackened death metal.

The final song ‘The Crimson Tower of the Headless God‘ is an epic track. Keyboards on a fast-paced drum tempo provide spaciousness for the symphonies to create a cosmic effect. During these epic moments, the crashing beats of drummer Nodens maintain a perfect cadence to the swirling symphony. Although one of the highlights of this track is the bewitching melodramatic chants of the female vocalist that soar to endless horizons.

One thought on “Prometheus – Resonant Echoes from Cosmos of Old”