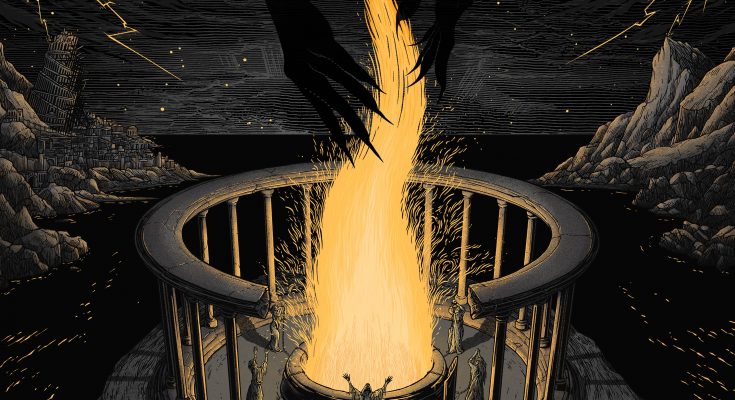 After the self-titled debut and its sophomore follow-up ‘Exile’, a title like ‘Ascension’ could imply a turn towards the positive for the end of times tale of this band from Nantes. A glimmer of hope before the apocalypse. Regarde Les Hommes Tomber’s closing of this trilogy, however, holds little hope for mankind. The moody instrumental opener makes it clear from the very start this will not be a happy sendoff.

Fulfilling on its promise, ‘A New Order’ unleashes all its blackened fury upon our dystopian future. It is followed on its heels by ‘The Renegade Son’, which is the most catchy song on this final part of the triptych. Its hypnotic riffing just propels it to the highest spheres. ‘The Crowning’ & ‘The Stellar Cross’ are less easy on the ear, but none less interesting for it. They manage to merge a Burzum-like droning primitiveness with the the finesse of a Cult of Luna.

‘Ascension’ is by no means an easy album. Akin to, for instance Inter Arma’s latest offering, it is a claustrophobic work that leaves little room to catch your breath. ‘La tentation’ , another short smoldering instrumental, may give you some short respite, but when the final track ‘Au bord du gouffre’ paints it last broad strokes with an unrelenting ferocity of pitch black post metal sludge, one can only guess what will one day arise from the embers of mankind.