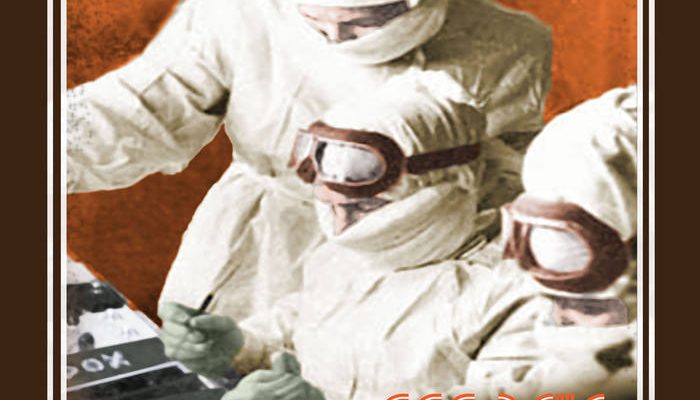 It has happened again: the Antwerp stoner scene has brought forth another beautiful baby. Rrrags is a project lead by drummer Rob Martin (ex-Bliksem), who’s proving here that next to his drum-skills we’ve been well aware of, he also has an incredibly powerful strut and he manages to use those two talents at the same time. Further we have the Dutch Ron van Herpen on guitar and Rob Zim on the bass. Now if you’ve paid attention you’ve noticed that all three guys have their first name starting with an R, which explains the name of the band.

Playing their release show, and first-ever show nowhere else than at Roadburn (!) this year, the guys got a head start. They haven’t played a lot of shows since, but I would dare to say that my favourite concert this summer was this trio performing at a secret festival somewhere near Antwerp.

Their first album is a 30 minute self-titled one, incomparable with one or two genres. Fan-favourite and opener for the album, Bones, is a catchy and bluesy song where Rob‘s vocals shine for the first time. Rag Machine is a bluesy, funky jam. Silence is Deafening and especially On With the Journey have a certain Thin Lizzy vibe to them, while Far Away Faces is a mesmerizingly smooth and trippy song. Finally Galaxy’s Hygiene is an incredibly energetic song to end your album with. The only lyrics featured here is the title of the track, yet no vocals are missed in this almost instrumental jam. The impressively long guitar solo reminds a bit of Led Zeppelin‘s work, and the amazing build-up this song features, invented by three great musicians makes this song one great psychedelic jam, perfect to end the album with.

I’d link a videoclip in this review, but unfortunately there is none (yet). Though the band has been promoted through THE biggest stoner/doom YouTube channel called ‘Stoned Meadow of Doom’, linked down below. So the whole album is available on both YouTube and the band’s own Bandcamp page. Physical copies -vinyl, that is- are only available at liveshows and eventually through their Facebook page, and I might have heard that a second press is on the way. Plus I have a feeling that Rrrags will grow out to become a broadly appreciated band and we haven’t heard the last of them yet.