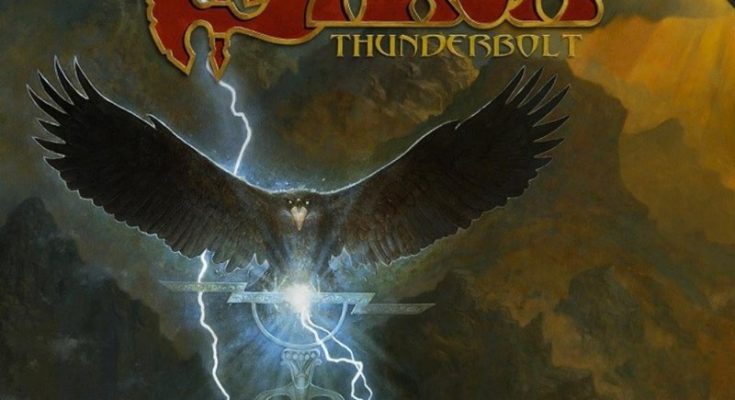 Saxon needs no introduction when it comes to traditional old school heavy metal. Throughout the long years they have been showing solid consistency in being a part of the NWOBHM. By the 80’s era Saxon’s career has shone along with many other NWOBHM bands such as Iron Maiden, Angel Witch and Venom. Albums like Denim and Leather, Strong arm of the Law and Wheels of Steel will always remain Saxon’s best records that identified the British heavy metal style back then. In the 90’s era Saxon diverted their potential strength abilities in producing a number of melodic heavy metal albums like Unleash the Beast and Metal head. While in the modern days Saxon has released unforgettable classics like Lion heart, Into the labyrinth and Sacrifice.

The British heavy metal legends led by the front man Biff Byford and Paul Quinn have set an excellent record in the modern days of heavy metal. Thunderbolt celebrates their 40th anniversary and their 22nd album. The song writing arrangements on this album is very close to the follow up album Battering Ram, as the band once again delivers some classic set of tracks. The album begins with Olympus Rising which is a short appetizer of electric guitars, dramatic drum beats and synth all performed in an epic style. Thunderbolt makes a powerful entry and once again Biff Byford proves that his vocals are mesmerizing and intense.

The secret of the flight is executed with loud and powerful guitars, Paul Quinn and Doug Scarratt shows solid coherency from constructive melodies and excellent solos that can only be achieved by one of the hardest working bands. Nosferatu is an outstanding track that begins with catchy elements and flawless performance. While the guitar riffs are executed in a powerful way, the chorus are majestic and it’s one of the highlights on this album. They Played Rock and Roll is a fast track generally where Saxon bid their tribute to the gods Motörhead specially to Lemmy Kilmister, with strong vocals this track acts as a hymn for the rockers.

Predator is another highlight song, delivered by thunderous riffs, Johan Hegg’s backing vocals are featured on this song along with Biff Byford, who both sound stunning and great. The selection of tracks are great showing that Saxon can still write interesting songs. As for the lyrics of the album they are associated with mythological gods and magic. The production is crystal clear and it’s been produced by Andy Sneap who has producing many studio albums for bands such as Megadeth, Accept, Judas Priest and Kreator, etc…

Son of Odin demonstrates an excellent soundtrack to valhalla, with the striking melodies of the rhythm guitars and intense full solos makes this song one of the highlights on this album. Sniper is aggressive track the rhythm guitars executed at full throttle, the guitars are very close in sound to the German heavy metal band Accept. A Wizards Tale captures a slow cadence the guitars solos are flawless and energized. Finally I must say that I have had enjoyed all of Saxon’s latest albums from Into the Labyrinth to Battering Ram. And with Thunderbolt it makes a fine addition to their long discography, fans of heavy metal will be very pleased with this album.