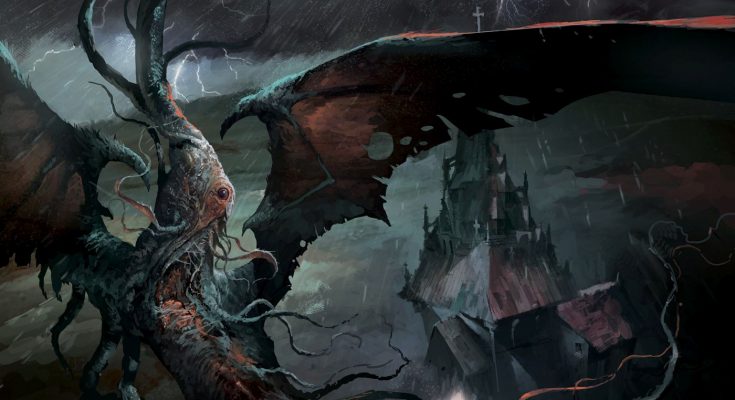 H.P. Lovecraft work evolved around many peculiar subjects such as mythological creatures and cosmic horror tales. Many bands have tried to adopt these stories musically but rather failed. Yet from North Rhine Westphalia Germany, there is a band that has got the perfect criteria to present its musical art on par with Cthulhu themes. Lovecraftian death metal band Sulphur Aeon are one of the few bands that have the required adequacy and pure state of refinement to illustrate the legacy of H.P. Lovecraft. The Scythe of Cosmic Chaos which is the third album is wrapped with a phlegm of tentacles, and possessed with uncanny state of art. Grand opening track Cult of Starry Wisdom is rather a cosmic inauguration of demonic invasion. Where Sulphur Aeon bewitches the listener with their surrealistic take on death metal.

The song has this mystic touch backed with clean chants, it only takes a few moments when the track transcends into a monolithic crushing death metal. The vocals sound spectacular and powerful as ever, Sulphur Aeon music is largely engrossed with a modern style of death metal. In similar ways to Septic Flesh and slight comparison to Behemoth, they have obtained a genuine sound. Those who are familiar with their debut album Swallowed by The Ocean’s Tide will experience some black metal elements which are elevated by majestic darkness. There are more elements on this album which widely appeared on their second album Gateways to the Anti-Sphere. The second track Yuggothian Spell is filled with uncanny atmosphere, every part of this track is well balanced, the vocalization ranges from the ritualistic bizarre chants to brutal growls.

Sulphur Aeon have saturated the new songs with melodic semblance and ominous passages, Summoning of Nyarlathotep is a stellar track that finds itself integral to such description. The technical skills are quite sophisticated, and consequently the band shows its true art of crafting solos with such fluency. The instrumentation on the album are flawlessly performed, as they are littered with cacophonous themes of cosmic death metal led by heavy growls. The melodies in other hand are combined with ominous and mystifying take which is the central theme that takes various patterns. Considering the quality of songwriting and efficiency there are ample of hooks filled with awe inspiring riffs and tremolo pickings. One of the key element of this band is how the guitar can pull some sick and horrifying imaginary from your mind while listening to the album.

The Scythe of Cosmic Chaos is the album of the year, it’s a milestone in the history of the band’s progression. And it feels that the band has come into full understanding of how to apply the Lovecraftian themes. Each track is filled with the necessary contents of ambiguous and occult themes. The album is built upon majestic soundscapes, as each of their albums are considered to be integral and undivided. Veneration of the Lunar Orb is an epic death metal track that bears a superior quality. The track is caught by the cosmic havoc and ripped by the dual guitar riffing. As for the drums they are fully utilized with heavy blasting and thundering double bass which feels like a ten thousand heart beats.

The Scythe of Cosmic Chaos is combined with the elements from previous albums. Sulphur Aeon has taken a further step into the uncanny dimensions as they raise this magnum opus to the ancient ones! The Oneironaut – Haunting Visions within the Starlit Chambers of Seven Gates, is one of their longest title tracks as it carries the album into another level of staggering performance. The track begins with dual guitar melodies, propped with sinister haunting growls and ill-boding riffs which are elicited from the groundwork of death and doom metal.

Lungs into Gills sounds triumphant and raised with catchy melodies, the doom full sinister sound is perfectly installed within the song structure. In addition Sulphur Aeon makes a great use of their extended lead guitar segments and electrifying solos. This track stands as one of their best on this album, in this point of view it also shows how the band has reached to its climax. The vocals on this track are maliciously catchy and brutal with a black metal twist to them. The addition of chanting vocals feels very dramaturgic and it’s welcoming component by the band.

The final track Thou Shalt Not Speak His Name (The Scythe of Cosmic Chaos) is enraged with tides of seismic blast beats that are reinforced with chugging guitars. Artistically and creatively Sulphur Aeon are one of the fortunate bands that have reached to towering heights. The band is quite lucrative and talented this is certainly a monumental work of an experienced band that is capable of transcending beyond the bounds and further away…