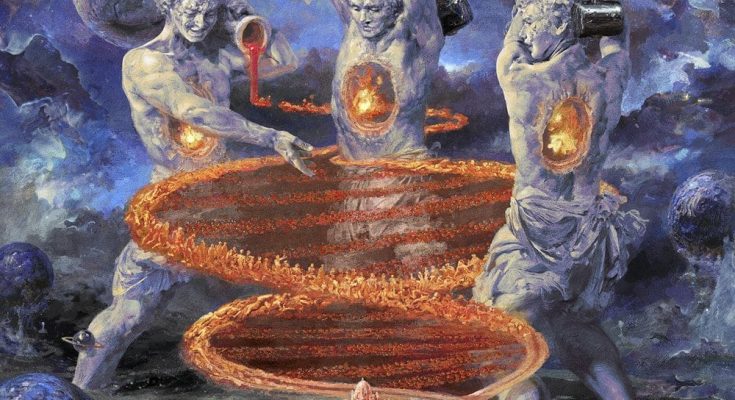 Bay Area thrash metal masters Testament return once again with their most anticipated 13th album ‘Titans of Creation‘. For three decades the band developed its own signature style and became one of the most influential bands in the history of thrash metal. With enough success and enthusiasm, the U.S. thrash metal quintet remained at the top of the best thrash metal where they dominated alongside Exodus, Slayer, and Overkill. Testament in 2020 yet unfolds another chapter of their career as they move into a new prosperous era. With a strong lineup which includes renowned veterans such as Chuck Billy (vocals), Eric Peterson (guitars), Alex Skolnick (guitars), Gene Hoglan (drums) and Steve DiGiorgio (bass guitar). Ever since the band released their comeback album ‘The Formation of Damnation‘, which in my opinion was a great turning point and a beginning of a new chapter, the band had clear intentions to expand their signature style. Now four years after releasing ‘Brotherhood of the Snake’ ,the superstar gang gears up for another fiery album.

‘Titans of Creation‘ seems to possess a high spirited ambition with the blasting, dynamic power of the opening track. ‘Children of the Next Level’ certainly engages in enough aggression and heavy riffs, constantly building on the intensity and the vicious vocals of Chuck Billy. With such a high level of violence, the lead guitars drip pure melodies and the riffs are effectively bold and sound more potent than the previous album. Testament presents an imposing personality without losing the chemistry of the tight musicianship.

Scorching melodies and the electrifying solos of Alex Skolnick sound as dramatic as ever. The next track ‘WWII’ starts in extreme riffing style. The coherent vitality of the performance is maintained throughout the album. Most of the songs are stimulated by the blazing guitar tempos and a pulverizing percussion that could shatter the walls. This time, the tone of the songs is turned up to the maximum. The rhythm sections and melodies are integrated. The guitar arrangements are fixated on atonal riffs. Therefore, the songs sound extreme and furious. The strict adherence to the fundamental principles of thrash metal is brought to straightforward aggression. On the other hand, the solos and the lead guitars are professionally demonstrated.

As a result of these combustible elements, there are plenty of dynamic grooves and melodies to keep you entertained. ‘Night of the Witch‘ presents the trademarks of Testament. This highlight track includes wicked shrieking and powerful thundering riffs. While the signature style of the band is quite recognizable due to the intricate solos and the vocal style, Testament on their latest album shows a remarkable way of adding more melodic qualities and other elements such as black metal.

Alex Skolnick‘s and Eric Peterson‘s shredding solos are sophisticated, with loud crashing on the drums and double kicks. The massive attack of the storming riffs shows clear intentions to a relentless approach to thrash metal. Another remarkable track of the album is ‘City of Angels’. Testament presents enough variety in each of the twelve tracks. Like other previous songs the bass is quite audible and harmonizes with the twin guitars, Steve DiGiorgio’s performance here is impressive.

Testament molds their craft effectively by bringing viciousness and brutality combined into one wicked track. Complex guitar arrangements that include slow chords in the mid-tempo, followed by heavy guitar vibes and solos, exemplify the sophisticated level of the guitar arrangements. ‘Ishtars Gate‘ is definitely full of thrills on this track. Testament moves to a more melodic and energetic tempo. Vocally and musically the band proves that they still have got the old school spirit. The wide showcases on the progressive and the technicality are inserted within the songs. For example, ‘Symptoms‘ incorporates the technical prowess of the band. ‘Titans of Creation‘ is a sophisticated and cohesive album measured by its solid aggression.

‘False Prophet’ is packed full of assertive riffs and has the aggression and the energy which the band lacked on the previous releases. The new album is regarded by its level of sophistication and straightforwardness, ‘Code of Hammurabi’ and ‘Curse of Osiris’ highlight further the vocals technique of Chuck Billy, which reminds me of ‘The Gathering ‘. These two songs are perfected by vicious riffing and guitar rhythms, which provides a boost to the energetic tempo. ‘Curse of Osiris’ is a furious blast of overwhelming riffs and vigorous drumming. ‘Titans of Creation‘ is expanded and stretched from the band’s previous outputs.

Testament has finally released a fierce album that presents its true sound. After three decades of business, the band bears a new code that will keep them on the top of the billboard charts of the top thrash metal bands. ‘Titans of Creation’ is a robust mixture of complex guitar work, aggression and above all, it’s the ultimate thrash metal record.

One thought on “Testament – Titans of Creation”