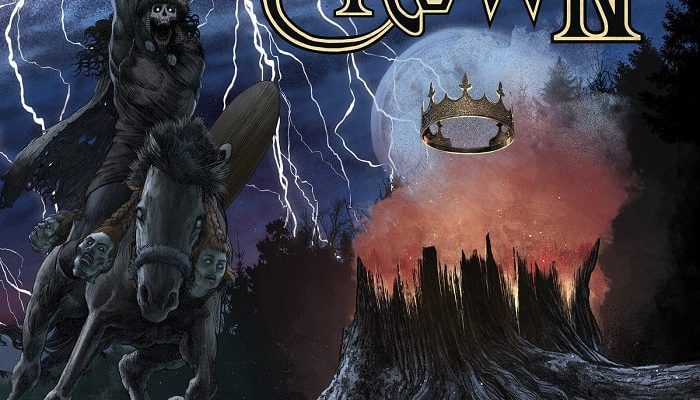 Swedish death/thrash metal berserkers The Crown bring a relentless fury on the band’s eleventh studio album “Royal Destroyer” released via Metal Blade Records on March 12th, 2021. Having a three years gap between the previous effort “Cobra Speed Venom” and this one, the band seems to have build up a rigorous intensity. Since 1998 The Crown accomplished great strength and musicianship and remained at the top of their game for many years. During which they exemplified the modern trend of thrash and death ‘n’ roll, making their music akin to the later Entombed style. There is absolutely no question that the band maintained a high level of accuracy and songwriting, the latest album picks up from where the predecessor left off. The songs intend to be driven by fast tempos and they are executed by incinerated solos, tight riffs, and blast beats. The band’s lineup has remained consistent since the previous album and it includes Johan Lindstrand (vocals), Magnus Olsfelt (bass), Marko Tervonen (guitars), Robin Sörqvist (lead guitars, backing vocals), and Henrik Axelsson (drums).

The Crown in 2021 brings some different formulation, once again these Swedes prove how hostile and aggressive their songs are. The explosive entry “Baptized in Violence” wastes no time over melodic intros. While the bands seem to be fit in the modern categorization of death/thrash metal they exploit various elements of melodies as well. “Royal Destroyer” is fueled by aggression and fierce riffs and there are no signs of slowing down from the sheer level of anger. The most powerful example is the following track “Let the Hammering Begin!”, which is combined with dynamism and aggression. The band displays great performance and confidence with the twin guitars providing a dash of melodies and catchy hooks in the song structure.

The songs are played at breakneck speed as they all seem to roll like thunderstorms, the drumming is played at hyper-speed prompted by energetic pacing. Although there are some notable variations in the songwriting this time that seems to have me thinking if the band ought to re-invent their brand of music. Tracks like “Motordeath” are a typical example of how the band can sound angry and belligerent. Whilst “Ultra Faust” balances technicality and fiery riffs, the overall performance suggests that there’s a slight change in the direction of the music.

The Crown shows an overwhelming force of vigor, the guitar chugs are dominated by the vocal roars. “Glorious Hades” is more oriented towards catchy melodies, the frenetic tone of the music feels restrained by the mid-tempo pacing. The guitars offer an amp full of hooks where the solos are paired with guitar melodies as they build a nice momentum. The powerful vocals on “Full Metal Justice” are somehow unconventional but am guessing the long-time fans will dig this track. On the instrumentation level, The Crown shows signs of growth and maturity, there are some modern elements fused into the songs. “Royal Destroyer” does not recreate the old tradition of the old albums such as “Deathrace King” and “Crowned in Terror” but it somehow embodies all that the band has achieved in the past.

“Scandinavian Satan” is a punchy track filled with an insane number of whirring riffs and savage drumming beats, with plenty of insane moments and upbeat tempos delivered powerfully. “Devoid of Light” brings meticulous intensity, the guitars strike with blazing riffs backed by machine-gun drumming. Although the album doesn’t require multiple listening it is clear that the band has somehow added new flavors to its formula. While some of the songs on the album such as “We Drift On” are prone to sound more melodic than before, simultaneously they define a real deal of quality from these Swedes. However, the second half of the album failed to capture the same fiery tone which was displayed in the previous songs.

The Crown’s newest album is a mixed bag of old and new elements that results in different quality in tracks. The final track “Beyond the Frail” is one of the better songs that results in strong delivery of the drums and guitars. But again, the band has already achieved a great reputation in the past and perhaps the time has come for them to try new elements and this is exactly what the new album is all about.

“Royal Destroyer” is recurrently aggressive and melodiously attained by the songwriting prowess, but as the band reveals its new cards, you’ll soon realize that the album has its moments and that’s it. Overall, this isn’t a bad album but if you have hoped for something brutal from their heydays then I am afraid you will be disappointed here.