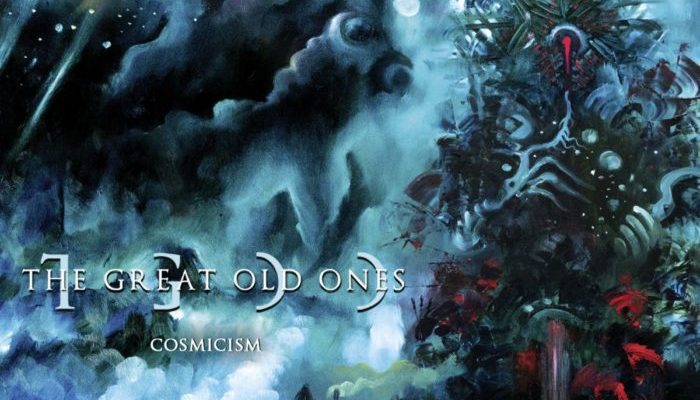 The inspiration of H.P. Lovecraft has brought many bands into the center of attention in the extreme underground metal genre. And as a result of this influence many bands have crawled out from the void. They’ve established their own interpretation of cosmic horror and dark spooky tales drawing themes from Lovecraft’s cosmos. Now centuries after his passing a few bands hold a true perception of the Cthulhu mythos. Initiated in the year 2009, The Great Old Ones have assembled a congenial sonic structure that honorably imbibe on Lovecraftian horror.

The Great Old Ones‘ latest sonic amalgamation is formed by vivid melodies and gripping soundscapes which are put into effective atmosphere. On ‘Cosmicism‘, They darkened their sound by finding suitable atmospheric arrangement. With a compelling installation of cosmic black metal and dreary elements, the quality of the music on the fourth album converts the writing embodiment of H.P. Lovecraft into an animated soundtrack of grotesque.

Besides the beautiful album cover and detailed painting with coloring decoration which provides depth. The bleak instrumental opener ‘Cosmic Depths‘ plays a suitable theme to the album. The natural comprehension on how to apply the misty atmosphere is brought to effect to create an opus of grandeur. ‘The Omniscient‘ for example implements the cinematic fantasies of cosmic black metal. The Great Old Ones conjure many mystical elements on ‘Cosmicism‘ where the musical expansion towards the gloomy density and bleak soundscapes is steered by the churning guitars. The tremolo pickings create a dark aura, and are often carried by volatile quality riffs. Moreover the effect of the spectral vocalization enhances the dark tone of the album.

The gradual transition of the tracks mainly emphasizes eerie melodies, while the drums shift into seismic blast beats. The band’s musical prowess brings an enticing atmosphere to ‘Of Dementia‘. When the guitars’ powerful waves create a mystic feeling with vivid leads and chanting, you can’t help but get goose bumps. These homogeneous elements are key compositions to the album and form many spectacular moments. With the guitars being blasted and amplified to a maximum you will hear many qualities of surrealism on ‘Lost Carcosa‘. The beautiful blend of hamonic melodies is remarkable, The Great Old Ones‘ talent is continuously centralized on droning guitar riffs and ghostly growls. With the chorus providing depth to the tracks, the French quintet have found unique ways to integrate post rock with black metal.

‘Cosmicism‘ uncovers the latest aural experience from the French black metal outfit, and cements their musical trademarks to higher scale. The grand epic ‘A Thousand Young‘ is their most intricate track. The track begins with ambient arrangements and sufficient melody. It transcends into gloomy passages, and shows the intellectual creativity that goes into writing such impressive music. Further into the center of the track you can hear the rumbling sound of the bass guitar juxtaposition with the guitar riffs and solos. The atmospheric portion is extended to mid tempo and they is mostly evoked by the slower riffs and drums.

‘Cosmicism‘ is an epic cosmic black metal album filled with superb dynamics. The tracks are balanced thanks to eerie melodies and the catchy soaring rhythm guitar. The musical performance is clearly the result of professional songwriting. Just look at the intricate album cover and tell me if this beautiful painting does not resemble the fictional theme of ‘The Color out of Space‘ & Yog-Sothoth.

The change in tone and intensity is proceeded on the sixth track ‘Dreams of the Nuclear Chaos‘. This track is engaged by blistering blast beats and droning black metal riffs. Pursued by intensive guitar work which adds the needful depth to the track. ‘Nyarlathotep‘ closes the album and is brought forth by effective quality of the inflecting guitar riffs that provides a thick layer to it. While the overall atmosphere grows darker, the menacing growls and the ambient elements in the background increase sonic intensity. The Great Old Ones‘ latest album by the French black metal outfit is a milestone in the band’s discography. ‘Cosmicism‘ is a journey into deep dark space. This is a supreme cosmic black metal record of the highest quality. Once again they have released a splendid album in the modern age of black metal!