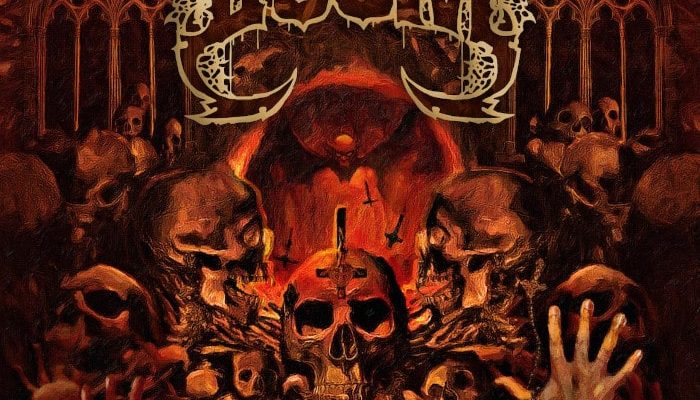 The first EP of The Troops of Doom is one to check out, especially because of one important member, namely: Jairo “Tormentor” Guedz. He is mostly known from his work on the iconic early Sepultura releases. “Bestial Devestation” and their first LP “Morbid Visions” are two huge releases that made their mark on both thrash and death metal and influenced many bands in the years after. The name of the band is of course derived from a song on Morbid Visions and, with two Sepultura covers included, the band is pretty clear about what they are trying to accomplish here. A return to 80’s death/thrash metal based on the early Sepultura period. The big question is of course if they can stand their ground without being too reliant on Jairo and his legacy. Well, yes and no.

While there isn’t anything horribly wrong with this EP, they fail to differentiate themselves from their colleagues in the genre. The songs are fast, loud and merciless but it’s easy to lose your attention when the songs progress without a clear goal or memorable structure. The EP kicks of with “Whispering Dead Words”, after a short and unnecessary orchestral intro the actual song is a fast one. pounding drums and sharp cutting riffs, this song barely gives you room to breathe. They do slow down, sometimes remembering the listener of some Slayer-like atmospheric pieces and at other times more death metal-like. In that regard they do seem to have balanced their death/thrash quite nicely.

It’s followed by “Between the Devil and the Deep Blue Sea”. More fast drums and riffs followed by slowed down pieces in which there is a bit more focus on atmosphere. While there is clear hint of old Sepultura in their songs, they do seem to have more identity in their music than just being copycats. Drums fill up the spaces in between with more creativity and do try to do something different to keep you interested. It’s the fast pieces when they start to lose my attention though, it just kinda sounds the same and even the awesome guitar solo can’t bring it back.

Now, “The Confessional” is where they really shine. Just listen to the intro that evolves into an awesome groove without having to sacrifice their ferocity. I absolutely love this song and it’s the perfect example of what the band is capable of. It’s more than just pounding away on their instruments, the song changes tempos naturally and the build-up to the faster parts are exactly how you keep the listener engaged.

Their last original song “The Rise of Heresy” is another fast one. Preceded by a demon voice there is a another build up to the speed you’ve pretty much grown accustomed to. While there is a break with some nice original riffing and catchy lyrics (did he say Morbid Visions?) the song just feels like more of the same.

The last two tracks are “Bestial Devestation” and “Troops of Doom”, which most of you probably know from the first Sepultura EP and LP. These songs do prove the band succeeded in bringing back that sound as the two covers follow their own songs seamlessly and a listener who isn’t familiar with Sepultura at all can be forgiven for not even realising these are covers in the first place. Of course the production is different and way less raw than the original classics, and that goes for every song here. The style they play is old school but the guitars don’t sound like they come out of my 2005 mp3 player and the drums are brought more to the front with a heavier production. The vocals on the other hand don’t really work for me, there is next to no variation in Alex Kafer‘s voice and a bit more effort on his part could make the band a whole lot more interesting.

Now, I might have given the impression I haven’t really enjoyed this EP. That is far from the truth. I really enjoyed it and there are definitely good elements but I worry that their full-length will be too long for what The Troops of Doom showed here. This record is just 22 minutes long and it isn’t a bad record at all, especially when it’s over so quickly but a full length with more of the same can be hard to keep you focused and time will tell if they will be able to accomplish more than what they showed here.