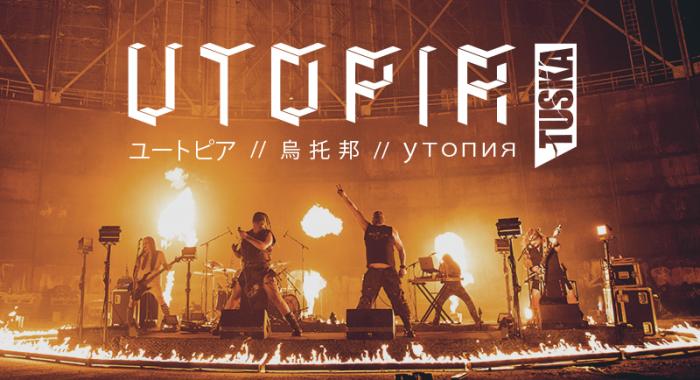 First up was the highly popular Finnish industrial metal outfit Turmion Kätilöt (***1/2). After they released ‘Global Warning’ earlier this year, their first on Nuclear Blast, they were ready to conquer the world beyond the “Land of a Thousand Lakes”. But alas, that party didn’t go through. Seeing Turmion Kätilöt live is always quite the experience and top entertainment. So a live stream show with them, has to take things several notches up compared to most others. And so it happened… they played their show in the iconic gasometer at Suvilahti, the location where Tuska festival usually takes place every year. A rather rare occasion, since the construction usually is closed for use by the public. The guys were set up in a circle with circles of light and pyro around them, making the inside of the gasometer light up in several different colors in the dark.

The show gets started with ‘Naitu‘ from their latest release ‘Global Warning‘ with second vocalist Shag-U walking around shooting his miniature flamethrower, and off we went for an hour of very danceable, party-inducing Finnish industrial “disco” metal. In a way a bit of a pity that immediately after that first song we got yanked out of the mood a bit with a piece about interesting places to visit as metalheads, hosted by Samy Elbanna from Lost Society. It was a lot of fun to see some corners that are important for metalheads that end up in Helsinki, but a bit of a weird moment, to be honest.

Luckily, it didn’t last too crazy long and before we knew it, we were pulled back into the fiery show from Finland’s craziest fuckers around. Every track seemed to have a switch in light show or pyrotechniques to indicate it was a different track. The setlist consisted basically out of tracks from their latest release ‘Global Warning’ with every time at least 1 track from an older album between. So in between tracks like ‘Kyntövuohi’, ‘Turvasana‘ and ‘Viha Ja Rakkaus‘ from ‘Global Warning‘, we got classics like ‘Pirun Nyrkki‘, ‘Grand Ball‘ and ‘Dance Panique‘. It was interesting to see them play in a setting like this and have cameras capturing everything so up close and sharp. I bet most of us haven’t seen these guys as well as we did tonight.

After a proper amount of tracks, we got another short intermezzo again. This time a short yet absolutely hilarious and random interview with vocalist, and brains behind the band, MC Raaka Pee and second vocalist Shag-U. Watch it here:

After that short bit, the guys hit back with full force for another 4 tracks, featuring some fan favorites like ‘Pyhä Maa’ and ‘Sikiö’ besides the very dark ‘Sano Kun Riittää’ (my personal favorite from ‘Global Warning’) and ‘Syntisten Laulu’. Again, it was really cool to see some guys of the band that you normally only see from afar, like the drummer and keyboardist, throwing themselves in their music completely. For people who haven’t seen these guys live yet for real, this was a great taster for the storm that is going to rage over the world once the gates are opened to set the “Midwives of Ruin” loose…