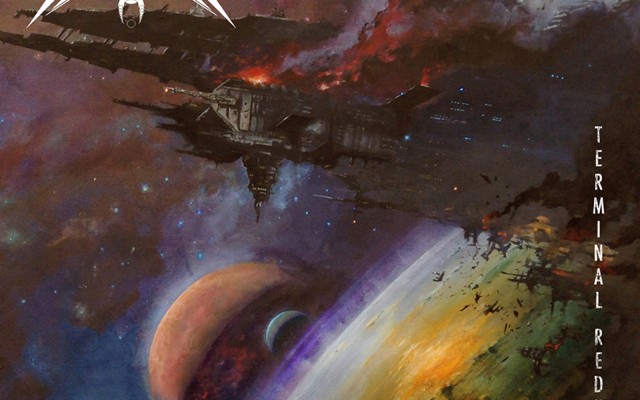 Amongst the deluge of contemporary thrash metal bands, Vektor has always stood out for its ability to write music that sounds familiar yet refreshing at the same time. Originally from Arizona, these talented musicians made the wise decision to move to Pennsylvania, a state where so many good American bands seem to be located. Their first two albums earned them quite a following. Black Future was a monster of a debut, elaborating upon riff and vocal ideas borrowed from (past) greats like Voivod, Destruction, Coroner, Death and Atheist. Follow-up Outer Isolation was the logical next step, ironing out a few kinks in the band’s intense sonic attack. Unnecessary to say that anticipation ran high throughout the metal universe when the release of a new record was announced. Fans wondered if Vektor could accomplish what Metallica or Slayer had done before them: to come out with a show-stopping third album and cement a decade-lasting legacy. Keenly aware of the stakes involved, the band decided to craft its first concept album. Quite ironically, it deals with the fortunes of an “isolation subject” who, in some lone corner of the galaxy, stumbles upon a crucial particle which grants humans extended life. With this new discovery, he sets out to conquer his home planet and establish an immortal reign.

As with previous records, the music on Terminal Redux could be described as technical thrash metal, although the Pennsylvanian four-piece is a bit more adventurous this time around. The opener Charging the Void is a good showcase of Vektor’s technical skills and songwriting ambitions. We are treated with a high-explosive barrage of jagged guitar riffs occasionally interrupted by slower passages. Near-shrieking vocals do a great job conveying the story’s dark and paranoiac subject matter. The rhythm section is wonderfully precise, with a nicely-audible bass and drums which have a pulsating feel for drama. Lasting about nine minutes, the track features an elongated song structure in which it is still possible to discern verse and chorus sections. Vektor takes the riff salad approach to songwriting: a great deal of riffs follow one another in rapid succession. Thankfully, they show enough resemblance to create a sense of forward motion. Individual sections build up tension which is periodically relieved through mid-tempo breaks. Around the seven minute mark, the song reaches an emotional climax when a host of harmonized clean vocals complement the lead shrieking in a soul-like fashion. It’s a beautiful conclusion to a piece which may be a little overwhelming in some places.

The other songs on Terminal Redux display similar sprawling tendencies. Cygnus Terminal moves at a slightly slower pace, befitting the ordeal of our protagonist who must plead his case before the rulers of his home planet (an evident nod to Rush’s 2112). Ultimate Artificer, by contrast, is very fast, with blazing chorus riffs which are close to speed metal. With LCD (Liquid Crystal Disease) and Pteropticon, the album moves into Slayer territory: intros are sinister and haunting, riffs pierce and squeal, while the solos swoop down from above. Psychotropia starts out with some majestically heavy rhythms but eventually the pace quickens, perhaps to illustrate the inevitable contradictions which frustrate the will to create an ageless utopia. Pillars of Sand increases the melodic factor, but nothing can prepare the listener for the stylistic summersault that is Collapse. It seems Vektor felt their ambitious third platter needed a rock/metal ballad in the vein of Metallica’s Fade to Black. The half-way decent clean vocals and melodramatic soloing offer some variation, but it’s hardly the best track on this record. That honor belongs to the monumental Recharging the Void. In the course of thirteen and a half minutes, the band paints a wonderfully diverse picture: a common melodic motif is reinterpreted through a host of metallic playing styles until the song goes into a contemplative middle section. For one last time, a voice of reason rises above the madness. But the conclusion is inevitable: deceptively optimistic plucking and shimmering melodies give way to an adrenalized rush of thrash riffing. The angelic voices return for one last time before the album goes into its death throes and a few stomping passages deliver the final coup de grace.

It should be clear the guys from Vektor poured a lot of effort into their newest creation. Whether you ultimately think this is a great album depends on your ability to empathize with the band’s aspirations. These four Americans set out to write the perfect musical accompaniment to an exciting storyline, which, like the great tragedies of old, still tries to deliver some kind of moral statement. Sure, the whole feels a bit bloated at times, but the strength of the individual components more than make up for any structural shortcomings. To me, Terminal Redux succeeds precisely because of this internal contradiction. Far too much is going on, but in the end, the message is relatively simple. In our postmodern times, so much has been accomplished that it almost feels as if there is nothing left to explore. As artists (and people in general) find it increasingly difficult to come up with something new, they start yearning for simpler times. Yes, life was hard back then, but at least it was easy to desire.

Illuminate what remains
From a time when all sanctions were hallowed
And our freedoms sucked straight from our marrow
To bleed after refrain
All we knew was the suffering
Away, all of the shame and the sorrow
Only hoping for endless tomorrows
(Vektor, “Recharging the Void”)