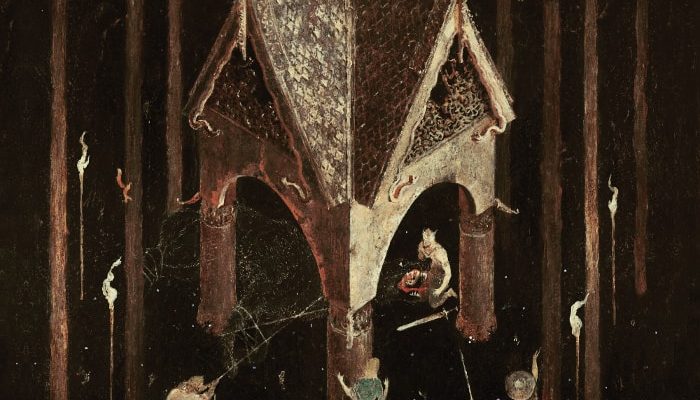 When I discovered Wolves In The Throne Room with their first 2 albums Diadem of 12 Stars and Two Hunters, I was immediately sold. My quickly fading love for black metal got rekindled into a blazing fire by the impressive sound and more serious approach of these guys. No more ridiculous corpsepaint, no worshiping of Satan or the likes… just creating a rawness and pureness that takes you back to the destructive beauty that is nature. After a sidestep into an ambient album, with their latest release Thrice Woven they (much to my delight) return to that earlier sound and feeling of Cascadian black metal.

The album opens with Born From the Serpent’s Eye and immediately shows that WITTR is back to true form. After an acoustic intro we get thrown into a wall of layered black metal guitars that gradually develops into a relentless black metal thrashing that’ll please any adept of the darkest music genre there is. To then halfway come to an abrupt halt where we wander into a magical and mesmerizing place with the hauntingly beautiful singing by Swedish star Anna von Hausswolff. Which might attract anyone that likes Myrkur or Darkher. Just when you are getting used to this almost heavenly sound, WITTR crashes back into the epic and layered wall of atmospheric black metal like they do so well.

The Old Ones Are With Us opens with the crackling of a fire and the voice of Steve Von Till (Neurosis) invoking the springtime thaw. Despite the lyrics celebrating Imbolc, the day marking the end of winter and the start of spring, this time WITTR delved into 90’s Finnish doom as inspiration for this track. With a slower tempo than usually and an almost droning and trance-inducing rhythm it brings a whole different character to their music. The addition of an acoustic bit with Steve singing invokes a feeling as if you’re attending to a pagan ritual in the middle of the forests celebrating the blossoming nature, ending up in an almost positive and exuberant feeling rekindling of the earlier doom/black metal sound.

Those 2 opening songs are actually the strongest of the album. That doesn’t mean that the rest isn’t of a really high quality though. Just those first tracks are more interesting than what’s following next. Angrboda sounds like an almost more straightforward and cold atmospheric black metal track that fits the frost giantess that its named for. The song is loaded with tremolos and fast-paced drumming to only be broken up a bit over halfway by an ambient intermezzo that feels more fitting than the whole Celestite ambient album. After the interlude Mother Owl, Father Ocean with a returning Anna von Hausswolff in a duet with Turkish harpist Zeynep Oyku, we get the last and longest track Fires Roar in the Palace of the Moon. Again you get the classic epic sound of WITTR‘s Cascadian/atmospheric black metal. There’s fast-paced black metal bits accompanied by repeating and droning rhythms that easily can take you away to other worlds. They build the atmosphere up even more with an intermezzo of fire crackling and then slowly going back to a more epic and harsh sound to end in a crashing of ocean waves.

Wolves In The Throne Room are making up a lot with Thrice Woven and got me excited with them again. Despite the fact that the album may not hold the same enticing and bewildering sound throughout, it’s still of a higher quality than a lot of their peers. The first 2 tracks are the most memorable, but the rest definitely still holds up strong. Again an example of how harsh yet beautiful black metal can be and an album that’ll please all fans that were scared of the band’s future after their ambient album. For me personally one of the black metal releases of the year for sure!

Release date: September 22nd, 2017
Label: Artemesia Records
Tracklist:
1. Born from the Serpent’s Eye
2. The Old Ones Are With Us
3. Angrboda
4. Mother Owl, Father Ocean
5. Fires Roar in the Palace of the Moon