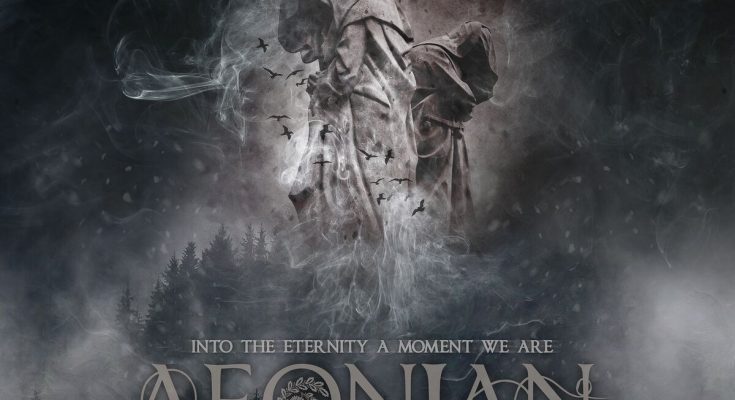 A while ago we saw the Greek singer Gogo Melone live with funeral doom masters Clouds in a cathedral in Antwerp (review here!), and we were completely blown away by her guest performance on In This Empty Room. The serene performance, combined with her angelic voice, sent shivers down our spines. ‘More!’, we thought! Apparently sometimes our wishes are granted, since this lady recently put out an album with her very own band, Aeonian Sorrow. This beast, consisting of eight funeral hymns, has been titled ‘Into the Eternity a Moment We Are’ and has been released by themselves – talk about a DIY spirit! Not DIY enough? Let me tell you that Gogo made the artwork herself as well (and I’d advise you to check out her art page too!).

For the release of this beast, Gogo has gathered a bunch of musicians from Greece and Finland (some of these guys are known for their work with Red Moon Architect as well), making this an interesting, international collaboration. I’ve never really wrapped my head around the way these bands operate, but with Gogo writing all of the music it shouldn’t have been too much of a hassle to get the album done.

Aeonian Sorrow brings us almost an hour worth of slow-paced and miserable funeral doom, with a twisted take on what you would expect of this genre. Of course the whole thing is mostly slow- to very, very slow-paced, and evidently the deep guttural vocals the genre is known for are present as well. What is totally new for the genre (at least I haven’t heard it before, save for Clouds) is the addition of clean, operatic female vocals. I have to admit I was a bit sceptical about this, but this proved to be totally unnecessary. The interaction between these two vocal types actually adds a lot of dynamics to the album – and even if Gogo’s vocals sound very warm, there’s still something quite miserable shining through.

‘Forever Misery’, the first 9-minute mastodon of a song sets the tone for the rest of the album, a 58 minute emotional rollercoaster. The huge amount of depression that is mostly to be felt in this genre has been cast aside, the overall feeling tends more towards a state of total melancholy. This feeling is only strengthened by subtle layers of piano and keyboards, drifting through the songs but never taking up too much time in the spotlights. This melancholy can probably be discovered the most in the fifth track ‘Thanatos Kyrie’, a song that opens with heavy-hitting gutturals, a sparingly used piano and a slight touch of Gogo’s typical vocals. After a while guitars are totally abandoned and only the super slow drums remain, topped off by those deep grunts of Alejandro Lotero. This track emanates misery and desolation and embodies the death wish (Thanatos), as stated by 19th century psychologist Sigmund Freud, perfectly. There’s not much of his ‘Eros’ present, no glimpse of love or hope.

Yet through all this misery a fine, fickle ray of light shines, since misery can be absolutely beautiful if one only dares to delve deep enough – and that’s exactly what Aeonian Sorrow accomplishes. Their music is haunting, touching and above all, redeeming. It’s a state of mind to drown in and emerge again, with a weight lifted off your shoulders. If listened through completely, without any distraction, ‘Into the Eternity a Moment We Are’ is a cathartic experience. Not that I’d expected anything else after seeing the front lady’s soul-crushing performance.

And to top all this off, Aeonian Sorrow are playing their first ever show on Belgian soil! Together with The Prophecy, The Wounded, Darkher and Kaunis Kuolematon they’ll be playing at The Casino in Sint-Niklaas on the 2nd of June! Organisation by Bro’d Promotions & Shades of Black and ourselves, GRIMM Gent! Tickets can be found here.