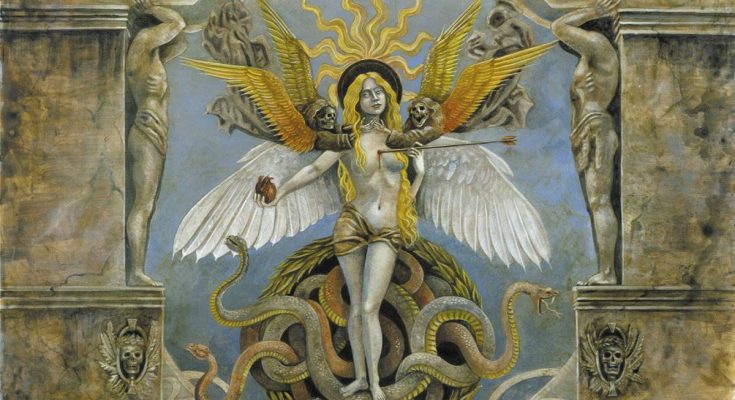 Aosoth is widely regarded as an all-star band consisting of some of the finest musicians of the Parisian Black and Death metal underground. It was founded one and a half decade ago by the illustrious MkM who is also the founder of the modern cult band Antaeus. Where Antaeus was always searching new extremes in the realm of fast and blasting Black metal, Aosoth incorporates more underground dissonant Death Metal influences from the nineties. This is mostly due to the involvement of BsT (The order of Appoleon, VI, Gential grinder, Aborted), the line-up is completed by INVRI who is also involved in VI and Antaeus.

The mix of slow and dissonant Death Metal with furious and ferocious Black Metal makes for an interesting concept throughout the discography of Aosoth. The atmosphere however differs quite a lot from IV: an arrow through the heart  and III: Violence & Variations their previous releases and also the previous chapters in the musical trilogy. The inside scripture also forms the closing piece of this trilogy which makes the difference in sound and atmosphere quite significant, the band even stated that they were having second thoughts and were considering not to release the album at all. Where An arrow through the heart had a more overall ominous and threatening sound to it, the new songs are again more uptempo and more in the line of what they have done on the Ashes of Angels album. Yet there is a subliminal level of continuity throughout the series of releases that is almost tangible when you hear each of the endeavorments in sequence. The mystical approach to satanism and darkness stays the same and even in the artwork there is a central theme present between chapters IV and V.

This artwork also reflects the musical differences between these two releases, where the artwork of IV was more dark and sinister, the one that has been chosen for V is more bright and seems to resemble a rather colourful reprint of a illuminated mystical medieval manuscript. The arrow through the heart is what connects both of them. For those who are familiar with the medieval mystical traditions of Hildegard vn Bingen, Bernard of Clairvaux and many others will realise the meaning behind the arrow and the bleeding heart as a metaphor for the exhalted religious experience and the nearness to the higher level. Aosoth clearly refers to this in their titles and lyrical concepts albeit of course in a more left hand path interpretation.

The bleakness and disturbing features of the music and lyrics makes this very present in the experience whilst listening to this piece of art devoted to the dark essence. It has been rumored that this will be the last strike Aosoth will ever release upon this world but nothing has been confirmed by the band itself so far. Hopefully it remains with rumors since the band obviously has some more potential, both in concept and in music that it would be a shame that the esoteric journey would end here.

Release date: November 17, 2017
Label: Agonia Records
Tracklist:
1. A heart to judge
2. Her feet upon the earth, blooming the fruits…
3. The inside scriptures
4. Premises of a miracle
5. Contaminating all tongues
6. Silver daggers and the breathless smile