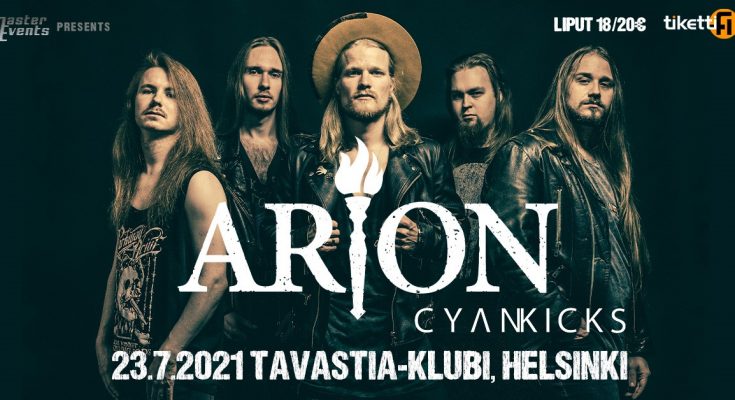 Phew! It’s been a while that we got to visit the rock temple that is Tavastia in center Helsinki, Finland! Our last time was all the way back at the end of October 2020 with the Lost Society show… Definitely time to get back to filling those sacred grounds with the sounds of good music and excited fans! So when we saw this event popping up, organized by Master Events, we didn’t hesitate for a millisecond. Add to that the fact that this is basically a release show for both the main act of the night Arion (released ‘Vultures Die Alone’ in April) and the supporting band Cyan Kicks (released ‘Not Your Kind’ in January) and we knew we were in for a fun night of quality tunes!

When it’s time for Cyan Kicks to kick off the night, the room is already quite nicely filled and you can almost feel the excitement of the crowd. Finally a live show again! A bouncy intro track blasts through the speakers, making plenty of people already dance a little bit. In other words a perfect warm-up for a poppy alt-rock band like Cyan Kicks. When they run on stage, they immediately kick off with one of their catchy bangers (‘The Flood‘ from their latest EP) and the energy of the band is right from the start through the roof. Bassist Leevi jumps around like there’s no tomorrow and at some point even does a guitar flip that almost seems to end in a fumble. But kudos for going for it with the much heavier bass! Vocalist Susanna Aleksandra pulls as usual a lot of attention to her with her emotional performance and excited dancing around. It’s clear that everyone on stage is in their element and are extremely happy to be back on stage.

The balance of their setlist was nicely done as well. Since this was the release show of their EP ‘Not Your Kind‘, a lot of their newer songs were to be expected, but they sort of balanced it out by playing an older song after a new song almost every time and that simply gave everything a great flow. Near the end of the set, most lights get turned off and Susanna goes to seek a closer connection with her fans by going on her knees on the extra elevation at the front of the stage, bringing an emotional ‘Weltschmerz‘. After this calmer moment, they kick in hard with a couple more of their bangers like ‘Wish You Well’ and ‘Endgame‘, ending on a high note with of course one of their biggest hits ‘Gasoline’. We can’t wait to catch them again on a bigger stage at their opening gig for Apocalyptica in a couple of weeks!

After a short break, the stage is ready for Arion to take over. Seeing the high amount of Arion shirts and the now much more crowded venue, a lot of people have been waiting to see these guys. As to be expected, the band gets called on stage by an epic and bombastic sounding intro track and when coming on stage they are greeted by excited shouts from the crowd. And once vocalist Lassi runs on stage, jumps on his little platform at the front and throws his arms in the air, the heavy music kicks in and the room explodes. If there wouldn’t be these restrictions in place, I’d bet there would have been some kind of a moshpit going immediately, feeling the energy in the air. Bassist Gege bangs his head like he’s trying to pop his head off while being basked in smoke, when he’s not shouting in his microphone. While guitarist Iivo as usual besides providing tasty guitar licks, bangs out gorgeous solos at regular intervals and of course Lassi takes his share of the attention with his stellar voice and stage presence. With the abundance of extra lights they managed to provide an extremely entertaining and highly enjoyable show. And I don’t know if it’s because I’ve been on a dry spell for so long concert-wise, but I thoroughly liked and enjoyed the band while at earlier times I got a bit bored after a while. Or then the music of ‘Vultures Die Alone’ simply translates way better to a live setting than their other songs. Whatever it was, something simply clicked and worked for me this time around.

Talking about ‘Vultures Die Alone’, since this was its release show, we got almost every single track served live except for maybe 2. On record not all the songs work as well, but live they manage to nestle themselves very comfortably in between the older tracks. And that they’d play ‘In The Name Of Love’ which features guest vocals of Cyan Kicks‘ front lady was almost a given since they were tonight’s openers. But to my big surprise, near the end of their regular set Noora Louhimo (yes, of Battle Beast) popped up to perform her guest vocals on the ‘Bloodline‘ track. Both of these tracks are in my humble opinion some of the strongest on ‘Vultures Die Alone‘ and it was an absolute delight to catch them live. Simply a stellar show and it’ll be interesting to see if they can repeat their feat at SaariHelvetti 2021 where they’ll be playing as the very last band of the weekend!

For more pictures of the show go check out our photo coverage here.