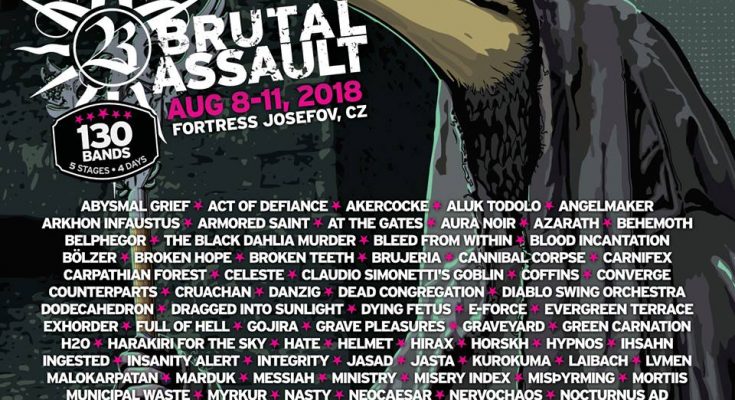 After a twelve hour trip through a Germany that was traditionally tormented by road maintenance works, we finally arrived at our destination: the picturesque village of Jaromer, Chech Republic. Situated within the inner walls of the impressive Fortress Josefov, many of its inhabitants had fled the scene of the barbaric invasion that was about to take place by Brutal Assault Festival, whereas the stores had stocked up on ridiculously cheap beer, rum and any other liquor you could think of.

As my companions were desperately searching for their designated parking lot and camping space in the secured area – here, the organization could have been better – , I said goodbye and joined some other friends who, like so many, had decided to set up camp in front lawns, village parks or basically anywhere you could fit a tent. Close to the festival entrance, but it came with the risk of being burglarized by the local gypsy community despite symbolical police patrolling. The best part: we were the closest to the line of food trucks and beer stands that extended along the fortress walls, straight to the festival entrance! Delicious ham that fell right off the bone, surprisingly heavy bramborak (potato pancakes), Mexican and Asian food that doesn’t make you want to die and refreshing chipper (grapefruit beer) to cover these last meters between the drunk frenzy of the festival and the overheated comfort of your tent.

The festival itself extends between the outer and inner walls of Fortress Josefov. Right behind the entrance, you could find the two mainstages squeezed against the walls. Large corridors filled with more food trucks with delicious dishes from all over the world (best bacon cheeseburger ever) and merchandise stalls connected them to the very spacious chill area filled with beach chairs and benches, a whiskey bar, a cinema, a lounge hall and even a freaking library. At the end of the chill area was the constantly smoke-filled Metalgate tent stage. Next to it but hidden behind the walls, those who were curious enough could find the brandnew Bastion X area, which offered a weird art exhibition, an exhibition about underground metal magazines and artwork, blacksmith initiations and even more benches to hang out and chill. Steep tunnels through the walls of the fortress led us to the Oriental stage in an octagonal stronghold between the walls. On this small square, the most exclusive and cult shows of the festival were held.

Before we discuss the many bands who made these stages tremble with the best our scene has to offer, let’s discuss some general features of the festival.

The Czech Republic is a goddamn oven so you’d better come prepared. There are some minor rivers nearby in which you can try to cool down, but it’s nothing compared to the Soça at Metaldays. Some nearby villages and cities can be visited for some sightseeing (mostly relaxing) if you have a car, but nothing special really. In Jaromer itself, there are enough shops and ATMs and you can relax in grass-covered squares with a nice view on the old buildings. (7/10)

There are plenty decent Dixi toilets and gentlemen’s piscines at all stages, with soap and running water nearby. We have never had a waiting line and for those who like flushing toilets, there were some available at the Metalgate stage for a small fee. If you want to spoil your behind (pun intended), you can also hop into one of the many bars in town. At the secured camping site (but available to all), there is a large sanitary block with dixi’s and hot showers, for which you can pay 1 euro per three minutes of hot water (here of course, there are lines). For pussies, there are also shuttle busses to nearby hotels. (8/10)

On Brutal Assault, literally everything is to be paid with the chip in your bracelet. I like this system because you can’t really lose your money when it’s stuck to your arm. With every purchase, the remaining amount is shown, but of course for us Euro-zone people, it requires a little attention in order to keep track of how much you are actually spending. There is one booth for exchanging euros into crowns, but it’s a bit stupid that you can’t exchange your remaining crowns back into euros at the end of the festival. The first aid quarters are quite primitive at first sight but I guess they do the job. Communication with and between crew members is quite disastrous due to horribly low knowledge of the English language, so it might take you a while to get what you want. There is a handy screen between the mainstage for schedule adjustments and such. There is also an app, but I’m not sure if it’s official. Upon your arrival you also receive a handy booklet which basically contains all the info you need. (7/10)

It sounds counterintuitive, but the food in Czech Republic (or at least Brutal Assault) is actually great! There is a very wide range of variety. Your classical pizza and pasta, delicious French fries made from sweet potatoes, bramborak, burgers and hot dogs in all shapes and sizes, trve cvlt black ice cream, vegan food, thai food, wraps, quesadillas, friendchips (I shit you not)… Food prices are reasonable and still well under Western European festival standards. In terms of drinks, there are beer bars and specialty bars (whiskey, shots, cocktails, cider…) scattered all over the festival domain near all big stages. You pay just 40 crowns (less than two euros) for a pint (50cl) of regular beer and up to 100 crowns (4 euros) for cocktails ranging from 25 up to 50cl, which is a friggin’ bargain! (9/10)

There is a lot to see on the festival grounds, but it’s not really advertised so you just have to discover it by scouting around, which is half the fun really. There is a cute little library but maybe BA should invest in some more English books. There is a horror and cult cinema from 9am to 11pm and a lounge bar with comfy couches opposite to it. Several art and metal expositions were held throughout the empty halls and corridors of the fortress and behind a curtain in a dark niche, there was a very dodgy “art film” being played (once again, sorry for interrupting, you guys and you very uncomfortable girl). Tired people can chill in a vast chill area with countless benches and umbrella’s. There’s a decent amount of merch stalls but the wares could be more varied. Furthermore, many vacant fortress halls and niches are converted into specialty and coffee bars or a temple for Lemmy Kilmister. (8/10)

Alright, that’s about it. Time to talk music! 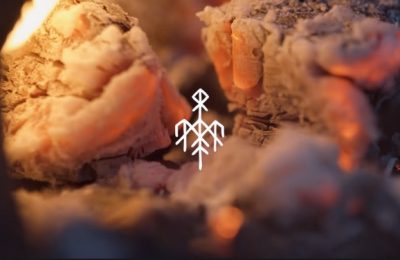