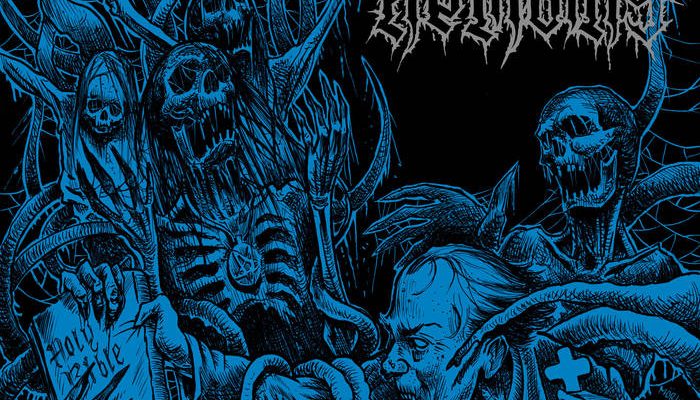 Transcending Obscurity Records has become one of the underground hubs for many death metal bands. This Indian underground label has been releasing some interesting albums from different genres including atmospheric doom and black metal. The expanding roster of this underground label includes many familiar bands such as Master, Heads for the Dead, Crawl and Paganizer. And to my count the label so far is hosting around 64 bands that play various styles of metal music. In 2018 Transcending Obscurity Records made some important releases and some of them ended up on my year’s end list.

And with the current year the label begun to advertise their upcoming releases, and one of the bands which have been put to their promotional plans is Burial Remains. Which is a side project band involving members from the German death metal band Fleshcrawl, and other Dutch death metal bands like Grim Fate, Boal and Disintegrate. Burial Remains emerges from the European underground metal scene, and their first full length album Trinity of Deception is to be released worldwide through this growing label. Combining the HM-2 driven principles from the Swedish death metal bands such as Entombed, Grave, Carnage and Dismember. The homage to the old days of 90’s death metal is brought by a sheer compliment from this four piece squad. Trinity of Deception contains seven tracks that will bring sudden blows of violence in the death metal scene. There are few things which makes the album special is that the debut was mixed and mastered by Johnny Pettersson of Wombbath and Heads for the Dead. The album also includes Ralph Hauber of the German death metal band Revel in Flesh as a guest vocalist. Burial Remains is more than a nostalgic band, and on their debut album the international band raises the bar high.

If you’re expecting some kind of Entombed worshipping chainsaw guitars then you may be right. But if you listen closely to their opening track Crucifixion of the Vanquished you will soon realize where the actual talent lies. With such a corrosive guitar whirring and deep death metal growls, the melodies are nicely entwined in the guitar sound. And that’s what really makes the album so different from most of the bands which play the Swedish old school death metal. You can hear the chemistry between the remarkable vocals of Sven and the pulverizing drumming of Danny from Disintegrate. The guitar riffs are memorable and catchy filled by the unceasing aggression, then comes the melodies to add the killer parts.

Burial Remains doesn’t sound close to Entombed, or Dismember, if you are familiar with the German death metal band Fleshcrawl you’ll notice the nuance to the musical style. The imitation exercise goes beyond the HM-2 and they key to quality is shown on the second track They Crawl. Which is a massive song and well-structured by the enormous guitar riffs and stomping groove brought by the aggressive guitar atonal. The buzz-sawing tone sustainability and the deep brutal growls are manically applied.

What attracts me more to this song is the sudden flow of the dense melodies. And within seconds you can hear the shift of the tonality when the guitars and the drums slows down. Allowing the menacing and densely vibes to sweep within the mid tempo parts. The good mixture of dynamics and the old school death metal style on March of The Undead is grittily performed. This is a mid-pacing death metal song charged by the corrosive riffs. One of the mid most brutal exercised track is the 5th song Burn with Me, the fiery blasts of the guitar distortion and the blast beats add some diversity to the song. But the best part is when the band adds the melodic hooks which are quite catchy and memorable.

The ugly and the menacing guitar tones on Days of Dread offers another heavy slab of the Swedish raw death metal. The drums shine on this mid pacing track, altering between the ponderous blows and the slow pacing. Unfortunately Trinity of Deception is only 25 minutes long and I wished if the tracks were a bit longer. Well it’s apparent to say that Burial Remains have somehow found their own niche on the debut album. It’s safe to say that band somehow sounds close to the 90’s version of Fleshcrawl. The never ending nexus or the series of old school death metal bands have been increasing so much. And I’m glad to say that Burial Remains somewhat differs from the tons of new OSDM (Old school death metal) bands.