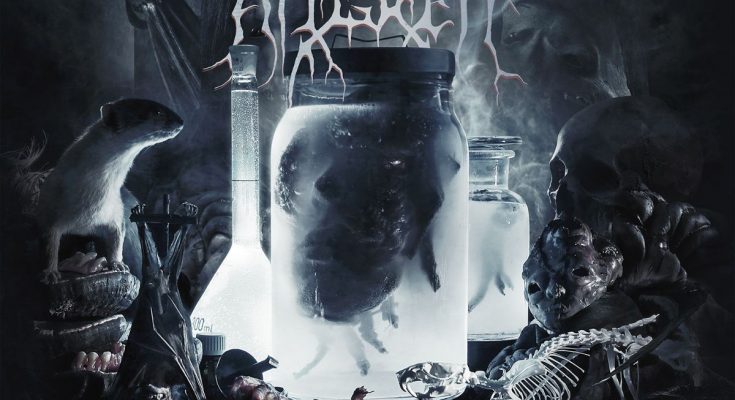 The Dutch horror outfit Carach Angren brings forth their latest album based on horrible abominations: ‘Franckensteina Strataemontanus‘. It is the band’s sixth album and it revolves around the grim storylines of the English author Mary Shelly. The classic tale of Frankenstein is a gothic novel written in 1818 and it’s about an alchemist who brought forth a spirit from the realms of death and became terrified by his own experiment. With these concept themes and lyrical style, the grim masters Seregor, Ardek and Namtar have taken their craft to a cinematic level. Since prior albums like ‘Lammendam‘, and ‘Death Came Through a Phantom Ship‘ Carach Angren never ran out of gimmicks as they focused on deeper subjects like the paranormal and possessions. Yet with each installment, the trio expanded on creating horror symphonies that will bring chills to your heart.

Speaking of the latest effort the album intro ‘Here in German Woodland‘ seems to be enhanced by ghostly murmurs. The opening theme has a foreboding atmosphere of eerie synth textures and it slowly segues to the next track ‘Scourged Ghoul Undead’. This begins with a swirling mass of synth and scourging guitar riffs. The track is led by sinister rasps of guitarist and vocalist Seregor. As the horror awakens and intensifies, spooky keyboards weave the grim symphony for the dead. Carach Angren on ‘Franckensteina Strataemontanus‘ find dark and menacing atmosphere. The album is driven by frantic drumming and heavy guitar drones. The title track uncovers some unprecedented elements which are brought by the combination of tribal drums, focused guitar riffs, and frenzied spooky growls. Namtar’s intricate drum patterns are one of the strengths that provide intensity to the songs.

‘The Necromancer‘ presents aggressive guitar riffs while the throbbing bass and pondering drums have a tremendous impact on the ears. The keyboard work is immensely detailed with the thrilling orchestration that brings horror and menace. Carach Angren even goes further than that the latest album by resurrecting the symphonic atmosphere which was absent on the previous albums. Seregor‘s mix of bloodcurdling rasps and clean vocals add suspense on ‘Sewn for Solitude‘. Like a grim horror fantasy, the Dutch horror outfit seems to be on the top of their game. Drums verge across many fast sections, with rapid blast beats and spooky orchestration.

This record is sure to please the old fans particularly, as the music mainly borders on vast orchestral textures brimming with nightmarish effects. ‘Operation Compass‘ concentrates on thundering blast beats and thick guitar riffs. Unraveling symphonies of madness just sweep forth. Ardek is imaginative and skillful in weaving bizarre and ominous symphonies, designed to fit into cinematic works of horror fiction. Some of the weirdest compositions of the new album are the use of the industrial elements and they can be found most prominently on the haunting track ‘Monster‘.

Through these pounding orchestral soundscapes driven by ebbing guitar riffs, Carach Angren shows many twists and turns. There are some moments where they remind me of Tartaros’ album ‘The Red Jewel‘. Throughout ‘Franckensteina Strataemontanus‘ the songs have put me on the edge of my seat. The musical content really builds up suspense. And it’s somehow impossible to predict what the other tracks will bring to the audience. For example, ‘Der Vampir von Nürnberg‘ is built on majestic soundscapes. Its bone-chilling orchestra is very imaginative, from the foreboding ghostly keyboards to the whole electrifying performance. Each track shines with the binding instruments that will keep you thrilled while the guitar mainly sounds jarring and effectively powerful.

‘Skull with a Forked Tongue‘ sounds sinisterly menacing. The guitar discharges tremolo pickings, and drums form devastating double bass patterns and blast beats. Even when the songs broods darkly on the bleak soundscapes, the band shows a unique technique. Carach Angren‘s modern art of black metal has always been in constant evolution and now it appears to be that the Dutch trio has achieved a theatrical quality. ‘Franckensteina Strataemontanus’ is such an immense album that that will capture your senses.

In addition, the latest output reveals the sophisticated craft, and more importantly, it can be deemed as the band’s best album since ‘Where the Corpses Sink Forever‘. To the final track of the album ‘Like a Conscious Parasite I Roam‘ is nearly theatrical and symphonic in breadth. Here the similarities are very akin to Norwegian symphonic black band Limbonic Art. ‘Franckensteina Strataemontanus‘ is one of my favorite albums of the year, and after seventeen years of activity Carach Angren have once more created something dark and mysterious.