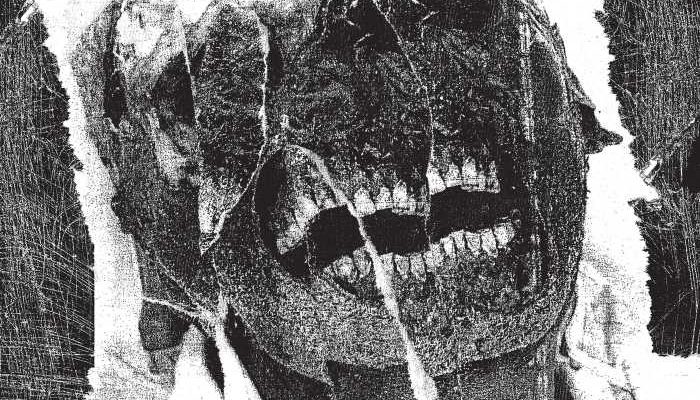 Caustic Wound is a superstar underground grindcore band from Seattle, Washington who recently released their debut album ‘Death Posture’ via Profound Lore Records. With a strong lineup that comprises vocalist Clyle Lindstrom (Fetid, Cerebral Rot), guitarists Max Bowman and Chase Slaker (Mortiferum), drummer Casey Moore (Magrudergrind) and bassist Tony Wolfe (Mortiferum), Caustic Wound delivers a disgusting putrid form of grindcore that you will likely never hear by any other band this year. Spawning from the recesses of the underground gutter, the U.S. quintet exposes the gory, suffocating air of pungent death metal. The debut is based on a foundation of old school grindcore/death metal. After debuting their first albums the members of Cerebral Rot and Mortiferum joined forces and formed a new, deformed medium of sonic brutality.

‘Death Posture‘ is conveyed by the raw, old school fusion of crusty metal, filled with distorted guitars and guttural growls. The putrid amalgamation of raw and guttural growls bursts on the opening track ‘Death Posture’. What sets Death Posture apart from other recent grindcore albums is the raw and old school approach to this sub-genre. However, the members of Cerebral Rot and Mortiferum have provided the tracks with a strong and crusty raw-edged riffing style.

Caustic Wound‘s music emphasizes these notions thoroughly. ‘Cemetery Planet’ is a mash up of abrasive riffs and grinding drums, driven by a frenzied motion of blast beats. The tracks on the debut are played at a fast tempo, triggered with heavy bass guitars. Many bands have paid tribute to the forefathers of grindcore, but Caustic Wound on the debut album has combined the elements of crust/death metal. ‘Visions of Terror‘ is fueled by unfiltered guitar riffs and automated drum beats. The band shows a great understanding of how to implement a claustrophobic atmosphere. ‘Death Posture’ is created from the groundwork of Cerebral Rot and Mortiferum. First of all, the riffs emit a miasmic air of infectious vapor. The reverb-drenched growls and the dynamic effect of the riffs are somewhat murky and filthy. Its churning atmosphere also evokes the style of cavernous death/doom metal and defines the tonality of the songs.

”Death Posture’ is a filth-ridden album characterized as raw, brutal and driven by the old school influences of the members who have presented a primitive take on death metal. ‘Black Bag Asphyxiation’ and ‘Terror Bomber‘ are both massive in scope and the blast of automated drums and distorted bass is provided by chunks of riffs. Due to the short length of the tracks, the album is only twenty-six minutes long. The songs build upon crude old school riffs and blast beats on tracks like ‘Blast Casualty’ and ‘Ritual Trappings‘. They are both topped with acute screeches and nasty growls.

There are also plenty of abrasive riffs and scourging tremolos incorporated on ‘Uranium Decay’, Caustic Wound’s debut is fixed upon the brutal style of death/grindcore and this what sets the record on a higher standard. As a more authentic form of well-crafted primitivism of early grindcore, the songs build up to a massive pinnacle of distorted guitars and mechanical percussion. ‘Death Posture‘ is an extremely brutal album that never ceases to erupt in a fierce tone from start to finish, leaving you breathless by the continuous assault of the merciless blast beats.

Other tracks like ‘Cabal exhibit the outburst of the blast beats with the nuances of Napalm Death‘s early albums such as ‘Scum’ and ‘From Enslavement To Obliteration’ set on a corrosive tone. The galvanizing effect of the drums becomes intense: for example, the drums on ‘Acid Attack’ switch from up-tempo to straight forward blast beats. These grinding elements are featured on other tracks like ‘Invisible Cell’. Here the fuzzy riffs are carried by a robust technique. Some of the fastest tracks are ‘Guillotine’ and ‘Autonomous Weapons System’ , which are built on crusty riffs.

Caustic Wound has seemingly been inspired by the old school grindcore bands such as Napalm Death, Repulsion and Extreme Noise Terror. The growls on the closing track ‘Cataclysmic Gigaton’ are uttered by deep low grunts to a sickening effect. Grindcore may be an old fashioned style, but Caustic Wound reinvents itself with the debut album, although many bands have tried to re-define this sub-genre in vain. Their song structures are modulated with an introspective amalgamation of old school styles that makes this album sounds as it was recorded in the late 80s. And despite the slow grinding moments, tempo changes and the slow doomy riffs, Caustic Wound have transformed their debut into a harsh and jarring experience of corrosive grindcore mastery.