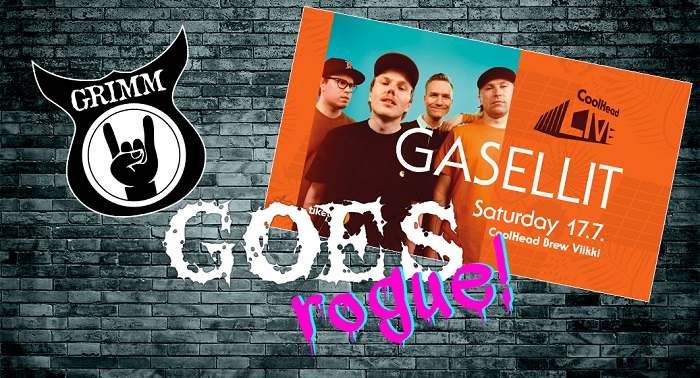 Our site is dedicated to everything rock and metal with a few sidesteps in music that appeals to the same music fans like synthwave, neo (pagan) folk, industrial,… But some us do have a taste for music and art that goes beyond these limitations. Enter “GRIMM goes rogue”: where you’ll get a metalhead, punker, rocker,… who ventures into realms beyond their usual habitat with an open mind and give their honest opinion, views and experiences.

“A mind is like a parachute. It doesn’t work if it is not open.”
Frank Zappa

Everyone has been aching to get back to concerts and live events. When one of my favorite micro breweries of Finland, Coolhead Brew, announced a very first concert series in cooperation with Master Events, I knew this could be a good first show of the year for me. What more could I have wished for? Class A craftbeers (their Nordic sours are simply some of the best around) with some quality Finnish artists. Apparently there were more people thinking the same thing, because the Saturday of the 4 consecutive days was completely sold out with 1500 people expected. Probably the fact that Gasellit, one of Finland’s most popular rap groups, played their first gig of the year in their hometown Helsinki played a big part in that success as well!

The first act started a bit late, probably stretching time a little bit in the hope to have some more people in front of him. But not too long after he was scheduled, NCO came on stage on his intro track together with a dude wearing a bright yellow duck mask. And he remained in the back, standing absolutely still throughout. Kudos to the duckhead dude, I wouldn’t want to be in his place wearing a rubber mask like that while standing in full afternoon sun… The music itself was pretty chill with some nice beats and especially ‘Alepa‘ stuck to me with its catchy melody and of course the to me very recognizable “Alepa” repeated a lot (the name of a supermarket chain in Finland). Despite the low amount of people gathered in the event area, he never let that get to him and still managed to pull in some people to come closer to the stage. A really nice and engaging start of the day, with a couple of early dancers spotted here and there!

With Aivovuoto (“Brain leak”) we got our first rap group of the day, where the 3 guys all provided some bars. MC Jodarok took most of the lines for him as the main rapper, while his producer buddies K.V.N & Lobo supplied support with beats and the occasional lyrics. The beats and music got slightly more minimalist and overall the music felt and sounded on the more dark side. I’m not completely sure what they were all rapping about, but it seems to me that they take inspiration of everything that happens around them in society. Their overall style and sound, reminded me somewhat of some of the more old school “serious” rappers I was a fan of ages ago. There seemed to be still some time to joke around a bit in between, sadly most of the jokes were completely lost on me. I really need to get that Finnish to a better level! While Aivovuoto was spreading their message, steadily more and more people entered the arena and pretty soon it became rather hard to quickly get a new craftbeer with long lines.

No time to waste waiting on beer, though. The event area was filled pretty nicely and it was time for the headliner of the day. Gasellit (“The Gazelles”) is one of the most popular rap groups of Finland and this was their very first gig of 2021 in their hometown of Helsinki. You could feel the anticipation and readiness in the air. Exactly at the scheduled time, a prerecorded intro played through the speakers with a voice instructing the crowd to shout for Gasellit after the count of 3. In the typical fashion of getting the crowd more excited and engaged, of course the first couple of times weren’t loud or good enough and more was asked from the crowd. When finally it seemed enough for the voice, and the guys of Gasellit ran on stage, the crowd exploded, releasing the build up energy, of not having a concert in ages, seemingly almost in one go. From start to end, I saw people dance, groove and move to the music, including Hätä-Miikka, Päkä, Thube Hefner and MusaJusa. While again not understanding much of their fully Finnish lyrics, I really appreciated how well the language works in this kind of rhythmic work and how they clearly played with the language to add more rhythm to it all. Add to that the vocal harmonies between DJ/producer MusaJusa, who has some decent pipes, and the rest of the guys, which added some decent amount of melody and catchy at the right times and you can easily see how they are one of the most popular acts of Finland in the genre. This was a gig I thoroughly enjoyed and the smile I had on my face on my way back home was definitely not just caused by drinking beer! I was humming their most recent hit ‘Tilanne pääl’ for quite a while after still…

For more pictures of the event, go check out our photo report here.