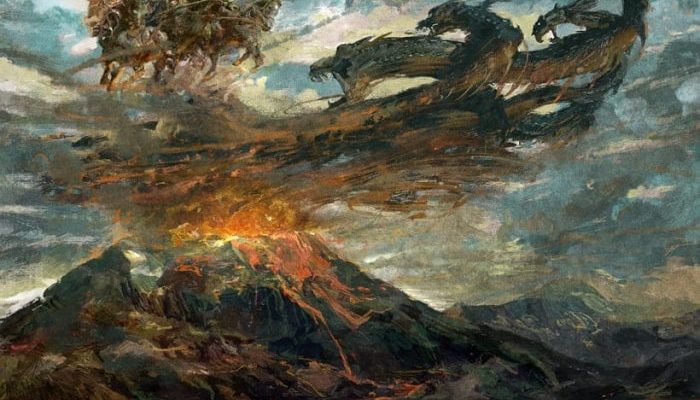 London’s blackened thrash metal stalwart Craven Idol has been honing its craft persistently for more than a full decade. Formed in 2005 by Immolator of Sadistik Wrath (vocals, guitars), the band’s lineup is completed by Suspiral (bass guitar), Heretic Blades (drums) and Obscenitor (guitars). The third studio album ‘Forked Tongues‘ is now out via Dark Descent Records and it incorporates brutal aggression crafted in the vein of second-wave black metal bands such as Destroyer 666, Absu and Desaster On the newest album Craven Idol raises the bar high delivering a malicious piece of blackened thrash metal fury as each of the seven tracks is striking in its own way.

From the opening track ‘Venomous Rites‘ the frantic pace of the drums and the galloping riffs launch at a high tempo. With double-edged riffs steeped in old-school black/thrash metal, the steady performance sets off into a maelstrom of chaos. The following track ‘The Wrath of Typhon‘ is a militaristic blend of savage hostility and violence. Although this time the songs emphasize atonal tremolos, the British quartet conveys the aggressive patterns of thrash metal. The clashing forces of rapid drums and scorching tremolos evoke the style of Destroyer 666. On so many levels ‘Forked Tongue‘ strides towards conquest. Amid a whirlpool of impenetrable riffs, the twin guitars shift to chaotic tempo.

The outburst of the drums brings in a constant speed of blast beats, while the work of the rhythm guitar moves together in chaotic turmoil. The blazing leads and the layered solos are brought in with sudden speed. There is no question that the quartet has multiplied the intensity. Their cavalry charge riffs seem well peaked and cunningly executed. The song structure is propelled by fiery tempos and satanic black metal furiousness. ‘Iron Age of Devastation‘ follows in at the same pace demonstrating the full range of their sharp tremolos. The tremendous vitality of the guitars and the drums is carried out with swiftness. ‘Forked Tongues‘ presents ultimate violence as the songs progress on. Craven Idol maximizes the coercive performance unleashing relentless extremity.

Thus, boosting a rapid mixture of ravenous blackened aggression, the guitars remain as the most jaw-dropping element with the towering lead guitars imbuing a savage quality into the songs. Its gripping combative riffs capture the classic tone of nineties black/thrash metal. ‘Even The Demons…‘ brings plenty of epic moments; the track is layered with excellent rhythm guitar that adds a superb quality. In comparison to the early albums ‘Towards Eschaton‘ and ‘The Shackles of Mammon‘ the songwriting and performance show great signs of progress. The title track sweeps like a colossal tornado and the drums generate massive rounds of blast beats, creating havoc and hellish destruction. In spite of the diversified tempos, the songs on ‘Forked Tongues‘ are well balanced by the scale of war anthem choruses and aggression.

The guitars apply instant hooks. There is enough variation within the songs and they are as potent and aggressive as the mid-tempo segments are full of infectious riffs. Other influences from eighties thrash metal bands like Slayer are remodeled into the song structure. The most powerful effect is the overwhelming amount of thrashing riffs. On songs like ‘Deify the Stormgod‘ Craven Idol managed to construct a ruthless and fast-paced energetic slab of blackened thrash metal. The song is tinged with catchy Middle Eastern melodies. The guitars display sheer enthusiasm as the riffs gallop through the raging tempo. The grand closure of the final track ‘The Gods Have Left Us for Dead‘ has plenty of melodic moments that seem to have the most epic composition among the songs. With the bass guitar humming vividly along the melodic guitar lines, the band demonstrates a truly unforgettable performance.

‘Forked Tongues‘ is both engaging and flawlessly executed by the British quartet who released their best album to date. Craven Idol did not only succeed on their third effort, but they have cleaved their path to sit atop the canons of blackened thrash metal. This is definitely one of the strongest releases of Dark Descend Records and it comes highly recommended for fans of Destroyer 666, Absu, and Aura Noir. 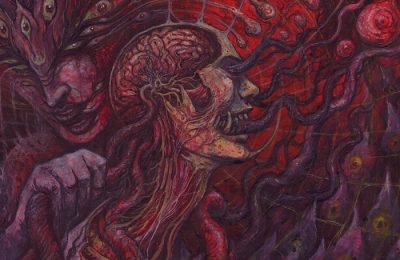 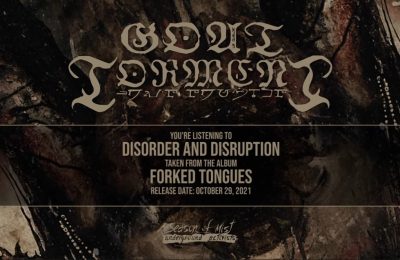