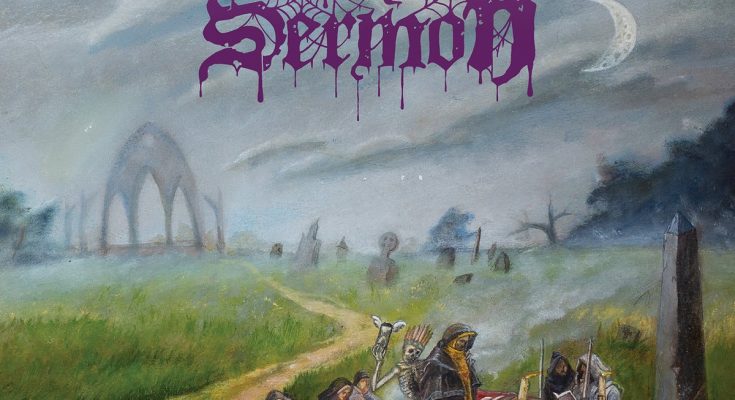 From the fundamentals of heavy metal, Philadelphia’s based doom metal band Crypt Sermon launches their second outing and the most anticipated album of the year 2019. The Ruins of Fading Light is a groundbreaking record that obtains its greatness from the classic principles of doom metal. The U.S. quintet of epic doom metal draw a massive influence from the forefathers of doom metal bands such as Candlemass, Solitude Aeternus and Black Sabbath. The sophomore creates magical themes of dark and medieval ages where the band turn their musical alchemy to perfection. In a short period of time Crypt Sermon were able to lay their trademarks on solid grounds. And by gaining the musical skills the band combines the thundering riffs of heavy metal with epic doom metal.

These sonic features form a bridge between dark elements and musical atmosphere that are extended into 10 biblical thematic tracks. The first highlight on the sophomore is the opening track The Ninth Templar (Black Candle Flame). Building on heavy metal foundation, the fine composition of such alchemy is defined by the loud guitar riffs which are followed by theatrical and towering vocals. Brooks Wilson‘s captivating vocals set a dark and atmospheric tone for the album, the clear influences of early Candlemass are explicit here. The stellar performance of the rest of the members is carried with such divine level. Each track is demonstrated with an effective implementation of the rhythm guitar, the dramatic role of the singer on the second track Key of Solomon is mesmerizing. With the pounding heavy dirges and soaring rhythm guitars, the vibrant chemistry between Steve Jansson and James Lipczynski creates a compelling musical connection allowing the melodies to flow vividly.

Crypt Sermon musical elements are composed of melodic embellishments and with heavy driven riffs and crushing drum beats of Enrique Sagarnaga. There is definitely no comparison between the debut album Out of the Garden which was released in 2015, and The Ruins of Fading Light. The sophomore is achieved by a high level of musicianship and crystallized by the fine performance of the guitar work. Through lengthy tracks such as Our Reverend’s Grave which is mainly crafted by the horrific and solemn themes of epic doom metal. You can hear the typical slow dirges of doom metal applied by the heavy guitar tone and blazing solos.

In respect to other doom metal bands such as Sorcerer and their attempt to combine epic doom metal style with heavy metal. Crypt Sermon crosses between this parallel style and leaps into measureless heights. The band wield their musical alchemy with enchantment, the highlight track Christ Is Dead proves how the band merges the dark atmospheric feel with a melodramatic vocals and crushing riffs of epic doom metal. The most beautiful moments of this massive track are where the low tuned guitars are beautifully crafted. From the catchy vocals and the gloomy melodies the addition of the acoustic guitar creates affecting melodies.

And while the guitars focus on slower tempos, the band forges a mesmerizing and dark atmosphere when the solos add the effect to this track. From one lengthy track to another, Crypt Sermon blends heavy riffs and explicit complexity when it comes to songwriting. The Snake Handler presents sinister riffs that bring Candlemass to my mind. The track features some enthralling parts of heavy tempos and atmospheric touches through clean guitars and hypnotizing intonation. Apart from the guitar melodies and the bell chimes the track is heavily compiled with sonic contents. The rocking bass guitar of Frank Chin emits paralytic sound waves and they are strongly present on each track.

The opening riff of Beneath the Torch fire Glare is a reminiscent of the classic Solitude Aeternus style. The crushing doom metal riffs are overwhelming and show the profound experience of Crypt Sermon in approaching doom metal. Between the thin lines of Candlemass and Solitude Aeternus the band crafts their musical creativity. Drawing the mystical themes of epic doom metal without neglecting the value of the crushing riffs. To the final track The Ruins of Fading Light, Crypt Sermon uncovers the explicit integration of the classic style of doom metal. Striking with monumental riffs and melodic vocal lines are the main component of this final epic track.

Crypt Sermon released a masterwork of epic doom metal, the sophomore is on par with the classic albums of doom metal bands such as Candlemass “Epicus Doomicus Metallicus” and the early albums of Solitude Aeternus “Into the Depths of Sorrow” & “Beyond the Crimson Horizon”. For traditional doom metal albums I recommend you to check the aforementioned albums. Crypt Sermon new album is essential for fans of doom metal, this is a masterpiece of a record, embellished and crafted by cunning art and vision.