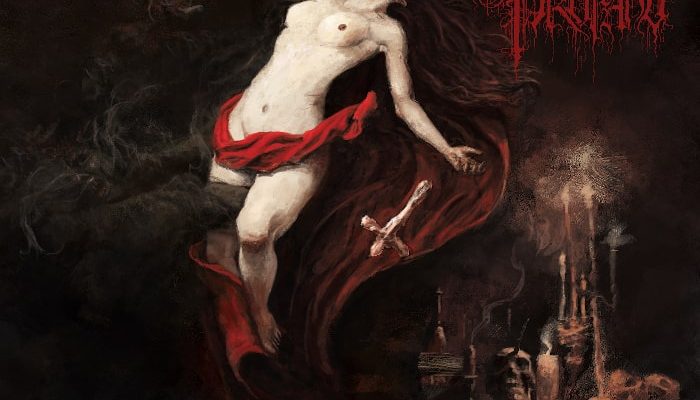 One of August’s highlight releases comes straight from the French underground label, Debemur Morti Productions: the sophomore release from the Californian black metal outfit Cultus Profano. Since their initiation, the U.S. duo Advorsus (vocals, drums) and Strzyga (vocals, guitars) took the raw inspiration from the old school black metal and created their own sound. As a big fan of the black metal genre, I grew up listening mostly to the Scandinavian black metal bands. However, in the last couple of years, the output of the American black metal groups has become more prominent, which has resumed my acquaintance with bands such as Nightbringer Aoratos and Wolves in the Throne Room. Cultus Profano has caught my attention with the 2018 debut album ‘Sacramentum Obscurus‘. The band is definitely among the highest elite that possesses a unique tonality of old school black metal. ‘Accursed Possession‘ tends to display a traditional form of the second wave as the sophomore elaborates further on the excessive use of the tremolo-picked riffs and creates an overwhelming air of malevolence.

The overture ‘Cursed in Sin, Op.25‘ preserves the aural composition in a traditional style. With raspy vocals that conjure up a sense of nihilism, the duo delivers pure hatred. Even though the music often gets repetitive, there is oft a sudden transition from mid-tempo to fast drumming sections. Regarding the album production, I must say that each instrument is perfectly mixed, in particular the drums. On ‘Accursed Possession‘ the songs usually follow the old school formulas. The abrupt transition of the drums on the second track ‘Devoted to the Black Horns, Op.16‘ accentuates the eerie instrumentation.

Strzyga emphasizes the chilling tone of the tremolos, but there is always something pre-natural about the overall atmosphere. Through this unholy and aural art, Cultus Profano implements various moods and styles of old school black metal. And as much as the duo harnesses the old fashioned framework, you’ll come to notice that each track takes a certain procedure. Many elements on the sophomore convey various versions of black metal that extend from Scandinavia to the Italian methods of black metal. Cultus Profano embodies the purity of the second wave. For example, the following track ‘Upon a Tomb of Sacrilege, Op.24‘ begins with sharp barbed-wire riffs and blast beats that set up an undulating tempo. One of the key elements of the songwriting are the potent riffs and they are in abundance here. In addition to the jarring riffs, the drums on the album are professionally performed.

The guitar riffs on ‘Towards the Temple of Darkened Fates, Op.19)’ are conveyed in such a savage and crude way. With an array of razor-sharp strumming, the vocals imbue the song with a demonic feel. As mentioned the tracks aren’t all dynamic. Cultus Profano offers many unique qualities on the sophomore. There is a certain transition when it comes to the drums that boasts power and speed. This clearly implies the balance between the fast pace and the double bass. Yet among these powerful riffs, the guitar inserts some hooks and adds a qualitative range of melodies that drip into the song texture.

‘Within a Coven of Shadows, Op.21‘ contains plenty of Nordic inspiration oriented toward cold hoar frost melodies. These effective components are combined to tint the songs with the somber colors of winter. The guitar arrangements on the album manifest an intellectual and visceral level of dexterity. The penultimate track ‘Tenebris Venit, Op. 23‘ begins with the slow oozing sensation of the melodies as the guitar chord-laden hooks launch into the dark and melancholic style of black metal. ‘Crown of Hellfire, Op.11‘ includes tremolo hooks and gloomy melodies while the drums shift into fast sections. ‘Accursed Possession‘ shows great signs of progression from this Californian black metal duo. In the span of two years, Strzyga and Advursos seem to hace acquired a uniqueness that enables them to come up with an accurate representation of the second wave of black metal. As one of the essential releases of 2020, ‘Accursed Possession‘ is more matured and visceral compared to the debut album ‘Sacramentum Obscurus‘ and finds a great way to encapsulate the profane melodies in raw black metal.