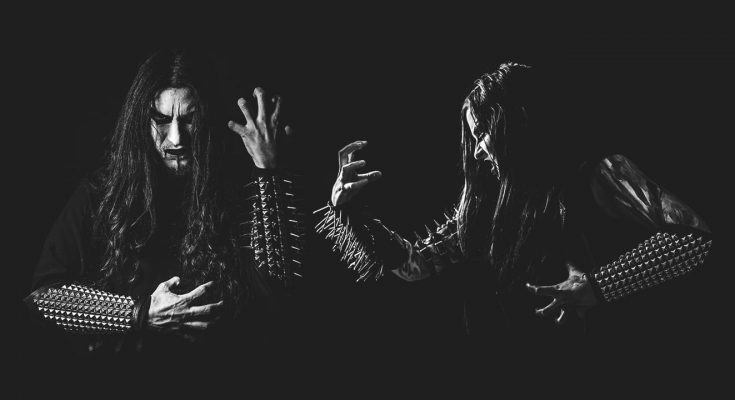 When I first listened to the U.S. black metal outfit Cultus Profano their music offered a unique manifestation of the second wave of black metal. But not only that the Californian duo “Strzyga” and “Advorsus” weaved unholy sounds on the recent sophomore release “Accursed Possession”, the nihilistic emotions of negativity go hand in hand with extremity. The solid incorporation of raw black metal and contrasting elements of the raspy growls and the tremolo pickings are enhanced by a grim and gloomy atmosphere as if each of the sonic hymns feeds the soul with impurity. We got to fire off some questions towards the prolific duo for hopefully deep insights about the perspective of the band:

GRIMM: Thank you so much for taking the time to answer some of our questions. How are you doing?

Hails! All is well. We have been busy composing new music and rehearsing.

GRIMM: For those who are not all that familiar with you yet, could you tell us about the musical background of the band and how you came to work with each other?

With an unholy vision we formed Cultus Profano in 2016. Under the banner of Debemur Morti Productions we have since released two albums, “Sacramentum Obscurus” (2018) and “Accursed Possession” (2020).

GRIMM: Your latest album “Accursed Possession” has been out for some time now. How was the response from the black metal community towards it?

Accursed Possession was released on the 28th of August. We do not concern ourselves with the response for we compose all our music with the aim of creating a dark energy that we connect with.

GRIMM: The gap between your first and second album was only about a year and a half, was the writing process any different this time around? And if so, how?

Our writing process has remained the same. All of our compositions are a blend of both of our styles and interpretations.

GRIMM: One of the distinguishing qualities of the new album is the pitch-black atmosphere of pure hatred, I really find this kind of particularity quite rare from what other bands offer today. Did you have some kind of a vision to nail a specific sound when you got to write and record the music?

Our vision has stayed consistent since the inception of the band. We create music that embodies hatred and obscurity.

GRIMM: I have noticed that the song titles on “Accursed Possession” end with “Op.” Is there a specific reason or philosophy behind using it?

The “Op” numeration is something that we have incorporated into the band since the beginning. Opus is a Latin translation for the word “work”. This method is inspired by the classical masters of music and depicts the order of when the music was written.

GRIMM: Many of your lyrical concepts deals with subjects of witchcraft and covens. Is the esoteric and occult something that is part of your daily life?

The occult is something that we connect with very deeply. It is this connection that leads us to create a dark aura and fulfill our unholy oath.

GRIMM: In the less than five years the band has existed, you have released two full-length albums already, where does the fire comes from to create and release new music so regularly?

For us, writing dark music is essential. We both play all instruments of the band, which allows us to continuously be composing and rehearsing.

GRIMM: How did Cultus Profano cross paths with Debemur Morti Productions, how has the relationship been with the label?

We signed with Debemur Morti in 2017 and have had an unholy partnership since. Many of our favorite bands have been or are part of this prestigious label and we are proud to be under the Debemur Morti banner.

GRIMM: Cultus Profano’s music is rooted in the second wave of black metal and I can see that there are various influences taken mainly taken from the European style of black metal. Did that branch of the black metal genre play a big role in your musical development? What bands did you grow up with in that regard?

When we compose our music, we do not concern ourselves with trying to sound any specific way. We create music that we connect with and that realizes our unholy vision. Some bands that we respect and admire include Armagedda, Supplicium, Nocternity, Tenebrae in Perpetuum, and Stutthof.

GRIMM: For a long time, U.S. black metal wasn’t highly regarded within the black metal scene. That has changed quite a bit over the recent decades. How do you see the development of the U.S. black metal bands and the future of USBM?

The music itself is what is essential. Darkness dwells in the mind and can be conjured from anywhere in the world. That being said, we do not pay attention to developments of specific scenes, like USBM. We write our music and listen to bands that we like based on their sound, not location.

GRIMM: Are there any plans for the band in the near future that you can share?

Due to the pandemic, we currently cannot confirm any live performances. However, we have been busy composing music for the next album and potential splits and EPs. As soon as the pandemic is over, we plan to spew our darkness and blasphemy across the world!

GRIMM: Thank you so much for this interview we wish you all the best.

Cheers for having us!

In case you missed it before, check out our review of their latest release “Accursed Possession” right here.