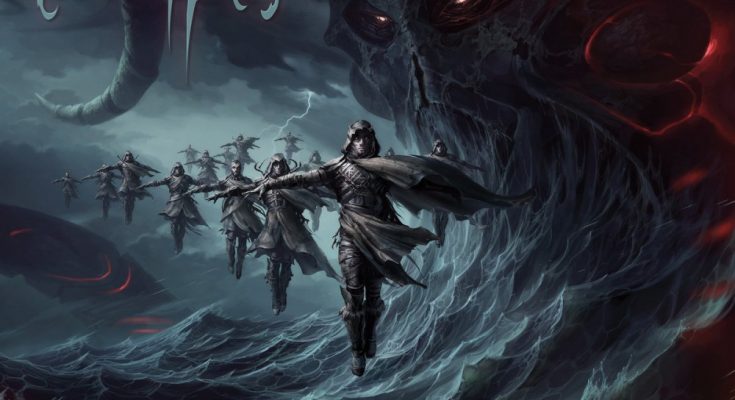 After guitarist, vocalist, CEO of Unique Leader Records and founder of Deeds of Flesh Erik Lindmark tragically died from sclerosis on September 20 2018, technical brutal death metal titans Deeds of Flesh geared up to return with their ninth studio album ‘Nucleus‘. Since their early establishment the Californian juggernaut was among the first technical death metal bands that maintained a high technical diversity. Deeds of Flesh were destined to make a niche of their own through a transformation that would make them a pioneer. In 1996 the band released its first debut album ‘Trading Pieces‘ which offered brutality in old-school form. Two years later they took their craft to groundbreaking, new levels where they exceedingly harnessed technicality and atmosphere. On their sophomore effort ‘Inbreeding the Anthropophagi‘, followed by another stellar release ‘Path of Weakening‘, they unfolded an extraordinary precision between chaos and brutality. Together with bands like Suffocation, Dying Fetus and Cannibal Corpse they have revamped and modified the sound of this sub-genre. Over the years the band offered a sophisticated musical creation of a fictional world of uncanny aliens. Through a process of modernization and expansion of their discography, they continued to present the modern version of brutal death metal. By launching a number of compelling albums such as ‘Mark of the Legion‘ and ‘Portals to Canaan‘ they reached the peak of their career by virtues of evolution.

‘Nucleus‘ reunites the band’s former vocalist Jacoby Kingston with the rest of the band. The lineup includes guitarist Craig Peters, drummer Darren Cesca and bassist Ivan Munguia. The lyrics on ‘Nucleus‘ were written by Erik Lindmark (RIP). They’re based on the sci-fi story theme of the band’s previous albums. The new album doesn’t only showcase the brutality, it also captures a cinematic style of story narration. The most notable aspect are the multiple appearances of plenty of guest vocalists from bands like Cannibal Corpse, Gorguts, Dying Fetus, Suffocation and many more. The opening track ‘Odyssey‘ explores the cinematic quality of orchestration and the prevailing theme of a superior alien race. With all the peculiarity of eerie sounds simulating the extraterrestrial samples, the band proves to have a unique approach to death metal. The massive delivery of the guitar riffs and the incredible layering of the solos exhibit a grand vision of professionalism. ‘Alyen Scourge‘ focuses on hyper blast beats and robust riff techniques that evolve in sophisticated tempo. Besides the swirling rhythms, melodies and deep guttural growls, each track is highlighted by a guest vocalist.

‘Ascension Vortex‘ springs into an effective range of crushing double bass and blast beats. With the technical capabilities and the repetitive formula Deeds of Flesh unfolds sheer brutality, although the dynamics here are beyond comparison. The innate talent of the band is manifested in many ways. ‘Nucleus‘ has the characteristic sound of the previous album ‘Portals to Canaan‘. Therefore, the songs revolve around the same sphere of brutality. There are other tracks on the album which are brought by unrelenting brutality and abrupt tempos that will cause your stomach to churn up. ‘Catacombs of the Monolith‘ showcases many variations in terms of the riffs and the hyper-paced drums. In spite of the technical efficiency Deeds of Flesh navigates through the modern spectrum of brutal death metal.

The latest evolution is centered upon qualitative levels of pedagogic methods. For example, ‘Ethereal Ancestors‘ is highly detailed with whirring solos and swirling melodies. ‘Nucleus‘ combines the old and new elements of the band delivered with a rejuvenated sense. Perhaps the most distinctive aspect that seems missing on the newest album is the absence of the eerie themes of the extraterrestrial. Yes, the band delivers a brutal slab of technical death metal and combines the acrobatic guitar solos, but at the same time it lacks the atmosphere and I find some of the songs to be quite generic. Instead the band applies some dense industrial sounds within the songs to give it that futuristic edge. ‘Nucleus‘ is densely packed with a stratum of complex riffs and deep guttural growls. Within its time length of forty-one minutes, the band swaggers in applying an overwhelming brutality.

‘Races Conjoined‘ is a standout track, carried by powerful bass strings and straightforward blast beats. Its atmosphere maneuvers through unsteady tempos of abrupt pummeling and tremolos. While the technical guitars are measured by high speed, there are many unhinged rhythm segments that add extra layers to the track. ‘Nucleus‘ continues with its engrossing experience. ‘Terror‘ is a destructive onslaught of sheer technicality. The song builds up with a steady tempo and titanic drum beats. Deeds of Flesh‘s innovative take on the genre once again finds the band experimenting in the bizarre fields of the alien sphere. The album is coated with an extraterrestrial atmosphere, making it quite compelling. 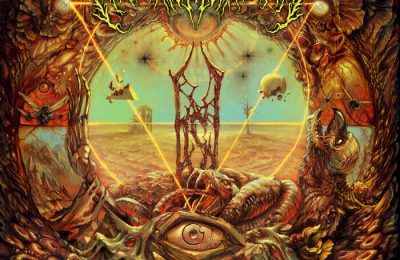 One thought on “Deeds of Flesh – Nucleus”