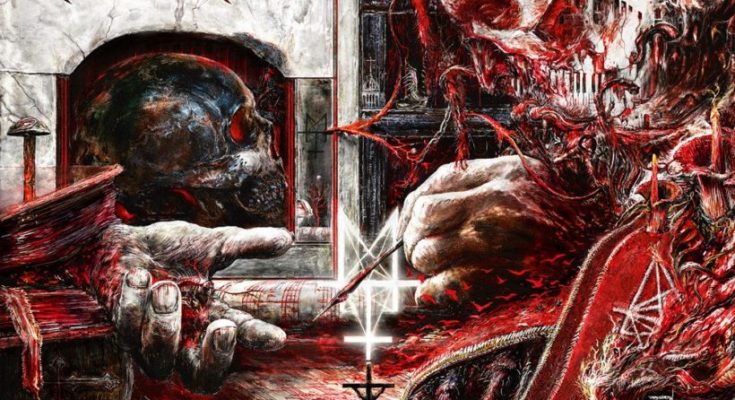 Deicide is one of the most influential bands in the history of extreme metal, and it’s really impossible to imagine this sub-genre without mentioning their legacy or seeing them around. Since their Blasphemous inception in 1990 Deicide were among the first Floridian death metal bands to establish their name along with Morbid Angel, Obituary and Death. Thus they received a considerable amount of praise from the fans around the world. They forged their name beside many other bands in the early 90’s and became linked with subjects of Blasphemy and Satanism, to be reputed as one of the most evil bands on the planet.

Deicide has released memorable and symbolic albums and they were all considered as timeless classics, the self-titled album, Legion and once upon the Cross are all masterpieces. Yet things were moving in the favour of the band with their 12th installation which in my opinion deserves a big credit from the fans of Deicide. Overtures of Blasphemy is a momentous record in the time line of the band, many have anticipated the real return to form after long barren years. Musically Overtures of Blasphemy brings the old Deicide back to its path, the vital force which surrounds this record has a powerful and irresistible effect. Believe it or not, I was really stunned by their newest material and had my album ordered instantly after listening to the album just once!

Opening track One with Satan makes a bold approach towards the extreme level of intensity. Once again you can hear the roaring vocals of Glen Benton and Steve Asheim‘s machine gun blast beats and thrust their way throughout the album. The guitars are over taken by an onslaught of ravenous riffs and ripping solos. Thanks to Mark English (Monstrosity) for enhancing the tracks with twisted melodies and technicality that makes this album even better than Serpents of the Light. Overtures of Blasphemy differs a lot from the previous releases, and there are those who have had their own remarks comparing this album with The Stench of Redemption album.

Despite of the comparison, I find the new album extremely fast and blasphemous, tracks like Seal the Tomb are a great example of how the band became cohesive once again. The tracks are based on simple formula, and shaped with excellent groove driven with extensive melodies and creative riffs. Glen Benton’s vocals are compelling, the new tracks have faster pace and they are delivered with an ultra-blasting power. The Stench of Redemption and Overtures of Blasphemy have the speed and the intensity of old Deicide, but in the same time the band has moved forward.

Overtures of Blasphemy is extremely brutal and has some reminisced moments that reminds you of their older albums. The production is clear and has a modern sound quality. Crawled from the Shadows, which is the second track on this album is captured with the spiteful growls. The bass lines utters loudly and the guitars have a fantastic riffing style, with swiftly solos which are very similar to the style of Slayer. Ex-communicated is aggressive and straightforward, the rapid pummeling of the drums are dashed with fury. The songs are more structured as the band once again emphasizes on creating a brutal effect. The latest album has some strong counterparts of Once upon the Cross that reverbs on their new material.

Defying the Sacred is one of my favourite tracks and it introduces some fine melodies that are held by Mark English who makes his first appearance with the band. This song particularly includes some great riffs and brutal blast beats, this is another great track, with highlights on the solid coherence between Kevin Quirion and Mark English. The album shows a solid performance from the band members in general, Overtures of Blasphemy brings Glen Benton back to his song-writing duty as he ejects his satanic verses with rage.

All 12 tracks sound brutal and it’s quite astonishing to say that Deicide has managed to compose some complex tracks. Overtures of Blasphemy is an excellent death metal album and it’s extremely driven with anger. The new album is literally filled with high octane performance, combining catchy riffs, sharp solos and overwhelming signature growls of Glenn Benton. Overtures of Blasphemy is oppressively merciless and empowered with enough ferocity and violence. Five years might be a long time, but after all Deicide are back and it’s great to see them around.

Release Date : September 14th, 2018
Label : Century Media Records
Track list :
1. One with Satan
2. Crawled from the Shadows
3. Seal the Tomb Below
4. Compliments of Christ
5. All that is Evil
6. Excommunicated
7. Anointed in Blood
8. Crucified Soul of Salvation
9. Defying the Sacred
10. Consumed by Hatred
11. Flesh, Power, Dominion
12. Destined to Blasphemy