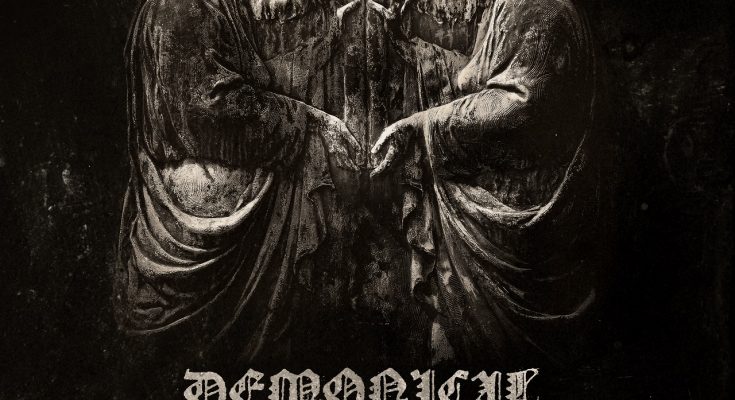 Swedish death metal act Demonical unleashed their sixth album “World Domination” on October 23rd via Agonia Records. Formed in the year 2006 by members of Centinex Martin Schulman (bass guitar), and Ronnie Bergerstål (drums). Along the lines of the modern revivalists of the Swedish old school death metal such as Evocation, LIK, and Bloodbath, Demonical is one of the pioneer bands who earned a prestigious status in the death metal community in Europe. Over the past years, they have presented the malevolent quality which often brings them close to the vicious style of Dismember. The band has gone through many line-up changes. Fortunately, the newest album brings one of the founding members Ronnie Bergerstål back on board. Within the lineup, there have been also some changes with the departure of the former vocalist. Alexander Hogbom was replaced by Christofer Säterdal. The guitar department remained intact and it is assembled by Johan Haglund (rhythm guitars), and Eki Kumpulainen (lead guitars).

If the previous album somehow offered the same repetitive formula then you must prepare yourself for “World Domination”. This song is forged by a fierce onslaught that will impress the fans. Demonical prefers to tackle the traditional form of Stockholm death metal on each release, and this is what makes their music often compared to the previous work. Through my evaluation of the band’s discography, Demonical has gradually increased the violent tone of the overall sound and thus their musical progression is the testimony of improvement. Across the eight new tracks, the Swedish quintet whirls a brutal and relenting force of violence. You can expect nothing but extreme brutal fury expelled in your face.

The album opener “My Kingdom Done” is a Viking war track amplified by the HM-2 distortion and propelling drums where the band evokes the classic hallmarks of the Swedish death metal a la Dismember. The dual guitars on the following track “Hellfire Rain”, is powered with the searing riffs, and pounding drums that overflow relentlessly despite the few repetitions. Demonical delivers a strong performance on their latest album. “World Domination” is instantly fiery laden with infectious hooks of the layering melodies that brings the listener to the edge.

Seemingly the rhythm and the lead guitars insert lethal hooks amid crushing bulldozing drums and feral demonic growls that proceed in jaw-dropping aggression. The album’s highlight is determined by heavy guitar distortion and catchy melodies that deliver the abrasive tonality of the Swedish death metal. “World Domination” is molded by heavy guitar chunks and melodies resulting in improved sonic diversity yet it firmly brings the standard of the Swedish death metal. In comparison to previous albums like “Servants of the Unlight” and “Hellsworn”, the new album mirrors the qualities of the rhythm guitars. Perhaps its most compelling aspect would be the angry tone of the vocals which in my opinion delivers better performance from the former vocalist.

The band presents its trademarks in its most intensive work to date. Despite the melodic hooks, the songs consist of many tempo changes that flow accessibly from one track to another. Next is “Aeons of Death”. This is one of the very unique tracks by Demonical that begins with catchy guitars and a crushing double bass. Besides the thundering riffs and the brutal growls, the most resistible part is the powerful chorus and the captivating guitar solo whose hooks are inseparable from the sonic palette. In addition to the band’s familiar elements, Demonical also shows a competitive spirit. The sweltering heat of the buzz sawing riffs erupts in fiery reverb. The sixth album is a huge step forward. It actually surpasses the previous album “Chaos Manifesto”. “We Stand as One” brings some variations to the regular formula. On this track precisely, drummer Ronnie Bergerstål employs some straightforward blast beats.

Some of the remarkable tracks that combine the blazing melodies with hellfire riffs are “Victorious”, whereas “Slipping Apart” focuses on male vocals and demonstrates a new flair of melodies. Demonical has stepped up their overall execution of most of the songs. They showcase the strong bond between the members. Mainly inspired by the characteristic trademarks of the Swedish death metal originators such as Grave, Entombed, and Dismember. Their music has more twists and turns.

“World Domination” exhibits the pinnacle of songwriting skills of the band. They managed to offer a raw sounding death metal that contains plenty of memorable riffs structured on pure old school traits. Though not too different from the previous albums. “World Domination” is overwhelmingly brutal and by far one of the best releases by the band in such a long time. This is without a doubt a huge achievement for the band to be proud of.