Home Death Metal Drawn and Quartered – The One Who Lurks 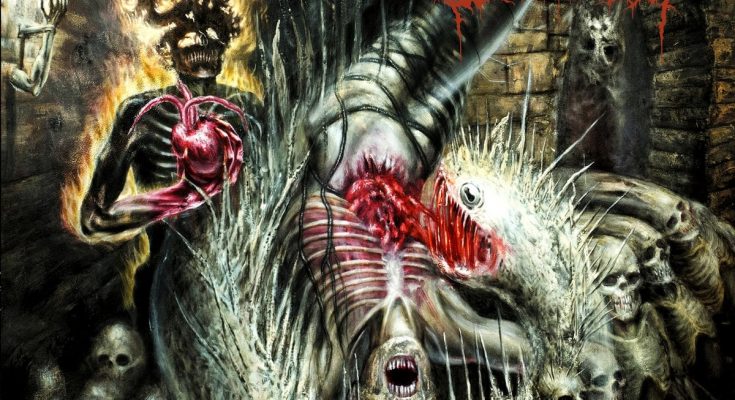 Death metal forerunners Drawn and Quartered return with their 7th album The One Who Lurks. For the past 25 years the Washington based trio have been constantly attached to the old school metal. Unfortunately Drawn and Quartered never earned a big interest from fans who often underestimate un-popular bands, though they may not be equivalent to other death metal gods like Immolation and Incantation. In my case I never looked into their discography although I’ve heard about them so many times. The One Who Lurks is the latest album by this band that maintains a good level of song writing. The thing about Drawn and Quartered is that they find a great amusement in lurking into the underground scene. Founded by lyricist, guitarist and bassist Kelly Kuciemba in 1993, who was joined by the long time vocalist Herb Burke.

The One Who Lurks comes in eight tracks of heavy old school death metal, and the new tracks have this doomy flavor to them with the deep growling vocals that captures unspeakable sinister sensation. Drawn and Quartered are still dominant when it comes to such style of death metal, and they have their own original sound even with slight influences from other bands, but the trio have been lurking in the scene for a long time and they know how to apply the impression on the listener. And that’s by delivering an excellent death metal music with distinctive doom metal that sounds very creepy and brutal.

Not many bands have achieved this kind of musical expertise but Drawn and Quartered seems to relish their own obscurity of creepiness. Opening Nefarious Rites is one sick fucking death metal track, the guitar riffs are brutal supported by bludgeoning drum performance. The high intensity of the double bass creates this thick wall of sound, whereas the growls echo from the deep with torturing riffs which are so heavy and complex.

The song-writing and technical skills are highly present on the new album, since establishment the U.S. death metal band maintained their signature sound with each studio album. Ravage The Cadaver strikes next with hyper blast beats and double bass, the band simply masters their own craft, as you will notice the nuance to Incantation in the mid-section. Horned Shadow Rise is a faster track, the guitars here move like destructive tides and have this killer tremolo riffs. The sound of the guitar tone is overwhelming it has the proper sharp pitch to this kind of style while the growls are ghoulish yet atrocious!

Deliverance to the Worms is another blast from this sick death metal band that knows how to write effective tracks, the guitar riffs are chaotic and filled with uncanny sounds. One thing I noticed about the album that tracks are short and straight to the point, the doom influence are rife and reek with eerie atmosphere. Temple of Arcane is a heavy death metal track combined with a violent upheaval of the storming drums and provided with audible bass guitar that vibrates with high frequency.

The One Who Lurks is a convincing album, and most of the tracks have this appealing tempo alternating between slow and fast riffs. The drums and bass guitar coalesced into one destructive powerful mass, this is a mind boggling performance and only a few bands can reach to such level of song-writing. Stylistically Drawn and Quartered are related to Incantation and Immolation but despite the comparison the band has the full capability in delivering their own mark. As they have successfully installed their formula which is presented by the deep echoing monstrous growls and stomping doom that feeds on the mid-section portion. Sadly this album was overlooked by fans of the genre and I feel ashamed for not paying attention but never say never! This latest vigor from the band proves that they are one of the consistent death metal acts that can evolve by time without neglecting the true sound of old school death metal!!